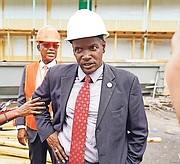 This was the suggestion of Minister of Works Desmond Bannister yesterday, as he revealed that works officials in the process of scoping Government House for needed repairs are finding more than what meets the eye.

He told The Tribune as the work involves an historic structure, officials are sensitive with its handling, adding “we can’t be petty about what we are doing with respect to restoring a national landmark”.

If that means paying the Governor General’s rent until Government House is restored to its original glory then that is what will happen, Mr Bannister insisted.

The minister could not reveal how long the works could take, but highlighted restorative projects around the world, saying in some places it could be “years” before historic structures are fully repaired.

He could neither say when the project will begin.

“We can’t be certain when its going to begin because we are still scoping Government House,” the Carmichael MP said when he was contacted yesterday. “Government House was built I think it 1804 and the minute you start to look at one thing other things come up and they have to be reproduced with a certain fidelity to historic needs of the building.

“As we go in and every time we look at something if you look in a wall you think there is one thing there and then you go and find that you have to go and do a couple other things. So we are approaching the project very carefully so that we can preserve the historic nature of the building and that requires our guys to be very patient as we move ahead with it.”

“In other countries when you have these restorations they go on for years. If you go in the United States and you see when they restore some of the places it takes years to restore them. So we cannot inject petty politics into something that we are trying to do at a national level for the country and for the Bahamian people, for your grand children and great grand children.

As the scoping process is ongoing, he could not reveal what price tag could be facing taxpayers.

However it will likely be something not put out to tender, but a very capable contractor chosen, he said.

“I don’t know whether we will put something like Government House out to tender. You have to be careful.

“That’s something government is going to have to look at to find the most capable contractor we can find to do the work,” Mr Bannister said.

Last month, Deputy Prime Minister Peter Turnquest stressed the importance of “comfort and security” following news that government was set to spend $9,000 a month to rent a home for Mr Smith.

At the time Mr Turnquest declined to confirm the rental price but noted the safety measures required by Mr Smith “come with a cost” and called for maturity regarding this situation.

Mr Turnquest he also highlighted it was to be a “temporary” arrangement.

He approximated these works will take a “couple of months” but did not provide a specific timeline.

So if that is the case then just demolish the whole building and build a new one and take about 18 months, rather than years. Besides, in our democracy, we don't even have an official residence for the prime minister. Really? In the 21st century. Even in England, who we supposedly pattern our system after, they have Buckingham Palace and 10 Downing Street. Is the Queen out of Buckingham Palace for "years" for repairs. Let's improve on this.

"As the scoping process is ongoing, he could not reveal what price tag could be facing taxpayers. However it will likely be something not put out to tender, but a very capable contractor chosen, he said. “I don’t know whether we will put something like Government House out to tender. You have to be careful. That’s something government is going to have to look at to find the most capable contractor we can find to do the work,” Mr Bannister said."

This whole "governance" thing, from Government House, to Disney raping Eleuthera, to taxing or not taxing the numbers bosses, to the Immigration mess, to the RBPD, to BEC, to WSC, to PMH to "Sand Dollars" is just sickeningly hilarious and couldn't possibly be more third world...

However it will likely be something not put out to tender, but a very capable contractor chosen, he said.

“I don’t know whether we will put something like Government House out to tender. You have to be careful.

If colony of out islands premier "Pop" Symonette, followed by prime ministers Lynden Pindling, Papa Hubert, Perry Gladstone and Hubert Minnis, have somehow all remained living at their own residences - pay tell why a governor-general couldn't reside likewise, yes, no .... at House of Assembly the PM, Speaker, MP's and cleaning lady, does use same toilet, yes, no ...

They do not know when the project will begin, or when it will end. Actually, the correct answer to both questions is likely to be, “Never.”

Banister should be ashamed of himself and all of the FNM cabinet. They knew for at least two years The government house was in need of repairs,

9.000 per month rent indefinitely is much. When there is a shortage of beds in both hospitals. The 60% in VAT that hurts the poor. and he speaks of petty.

Banister is a petty man . Ms Osbourne has seen his wrath

The cupboards are not bare after all. But they say it is the peoples time.

birdie please stop talking shit. Your current leader was in charge of the ministry that has responsibility for the repairs and he did nothing in his five years. Bwave admitted that the building needed work long before the current gov. took over. Lady was not living in there

9000 dollars for a home that he most likely will spend minimum time in because he lives in Freeport. Smh

No one is more petty than Bannister. LMAO