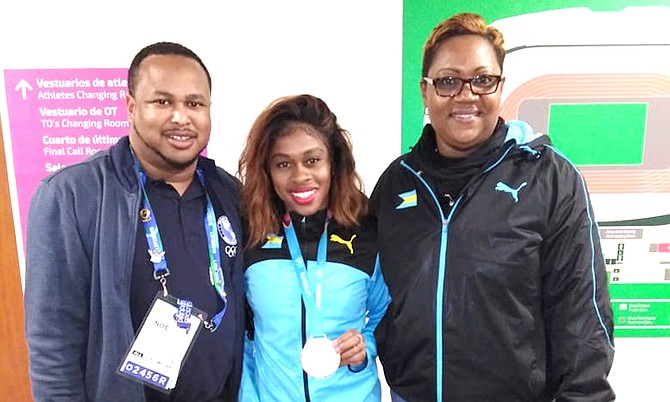 TYNIA Gaither clinched the Bahamas' first medal at the XVIII Pan American Games by securing the bronze in the women's 200 metres on Friday at the National Stadium in Lima, Peru.

Gaither wasn't able to catch Jamaican Shelly-Ann Fraser-Pryce, the 2008 and 2012 Olympic champion, who surged to the front for the gold in a meet record and personal best of 22.43. That shattered the previous 40-year-old mark of 22.45 that was set by American Evelyn Ashford in San Juan, Puerto Rico in 1979.

Gaither, the 26-year-old Grand Bahamian, clocked 22.76 to get on the podium with the bronze as she trailed Victoria Rosa of Brazil, the silver medalist in 22.62, a PB as well.

It was a turnaround performance for Gaither, who finished as runner-up in the women's 100m at the Bahamas Association of Athletic Associations' National Open Championship in Grand Bahama two weeks ago to Anthonique Strachan in the 100m.

Neither Gaither or Strachan contested the 100m that was won by the 27-year-old Jamaican reigning Olympic double sprint champion Elaine Thompson in 11.18.

But Strachan, who went on to take the sprint double in Grand Bahama, with Gaither opting not to contest the 200m, was also in the half-lap race in Peru.

Both Gaither and Strachan were scheduled to return for relay duties for the Bahamas in the women's 4 x 100m final late Friday night.