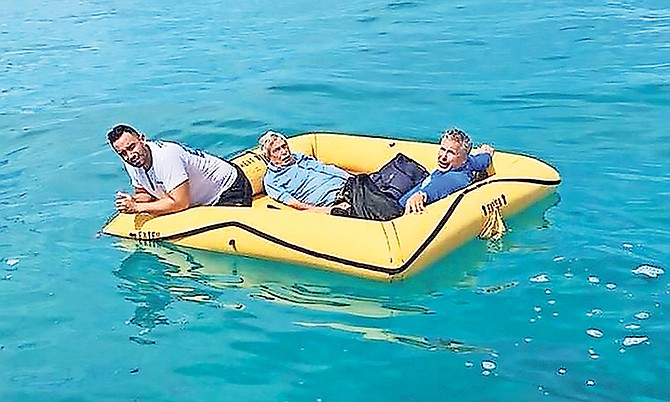 The three Americans who crash-landed near Cat Cay yesterday, afloat in a life raft.

A TWIN-engine Piper PA-34 airplane crash-landed in waters near Cat Cay after experiencing engine problems yesterday. According to the Royal Bahamas Police Force, three American men were on board the plane when it went down in about 15ft of water. No one was injured.

The plane took off from the Great Harbour Cay Airport and was flying toward Miami Executive Airport in Florida.

“Reports are that shortly after noon on Thursday, police were alerted of a white and red twin engine Piper plane, crash landing in 15 ft of water near Cat Cay with three American male occupants,” police said yesterday.

“The plane and occupants had arrived in the Berry Islands early today and were returning to the United States of America when they experienced engine difficulties and crash landed near Cat Cay.

“There were no injuries reported and all parties were transported to Cat Cay by a passing vessel.”

The Bahamas Air Accident Investigation Department is leading the investigation, but local police, the US Federal Aviation Administration and National Transportation Safety Board also will be investigating the incident.