Bcaa Tells Sky Bahamas It Is Not Being Singled Out 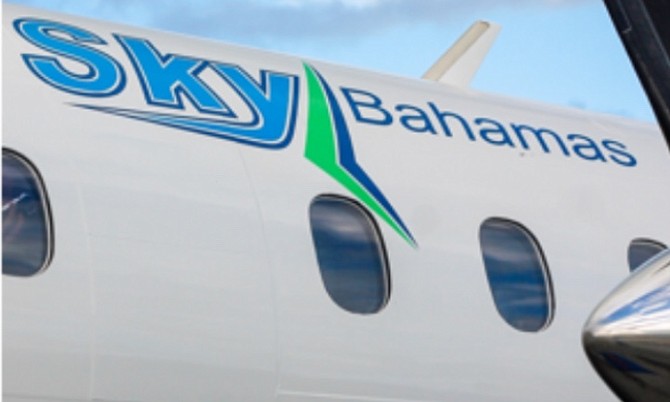 ADMIST the ongoing standoff between the Bahamas Civil Aviation Authority and Sky Bahamas, BCAA Director General Charles Beneby yesterday insisted the airline is not being “singled out” — as he underscored the Authority had nothing to do Sky Bahamas being “ordered out” of Lynden Pindling International Airport.

During a BCAA press conference held yesterday, Mr Beneby was adamant the issues regarding Sky Bahamas not receiving its air operator certificate (AOC) are “not an act of sabotage” and said there is “no political consideration” at hand.

Instead, he noted the carrier has several outstanding requirements which need to be met.

Admitting communication between the regulatory body and Sky Bahamas CEO Captain Randy Butler has been “strained”, Mr Beneby nonetheless said he would be willing to work with the carrier.

Sky Bahamas has been grounded since July 8 over issues regarding its AOC. Captain Butler has been vocal regarding the airline’s challenges, which include financial losses “already in the millions” due to Sky Bahamas’ inability to carry fare-paying passengers and his concerns for the airline’s employees.

Noting the press conference was not a “mud-slinging exercise”, Mr Beneby provided further context for the saga.

“We have an operator that made an application for a renewal of an (AOC),” he said.

An (AOC) is the approval granted by the Authority to an aircraft operator to allow the use of an aircraft for commercial purposes. This requires the operator to have personnel, assets, and systems in place to ensure the safety of public and the operator’s employees.

“The operator in question had a number of concerns that (were) discovered during our routine inspections and we embarked on an exercise which would have facilitated or given them an opportunity to have those matters addressed in a timely manner.

“As was suggested in the press, Sky Bahamas is not being singled out. This is not an act of sabotage. There is no political consideration, certainly on the part of the Authority. The issuance and renewal of an (AOC) involves a process.

“We had reason to pause in the application of Sky Bahamas. We believe that our posture was sound, given the mandate that I outlined previously.

“The Authority will not be coerced, bullied or strong armed into granting an air operator’s certificate unless and until it is satisfied that the applicant possesses the necessary capabilities, operational, technical and financial, to perform the functions granted by the certificate in a safe manner, which protects the well-being of the flying public.”

Mr Beneby also noted Sky Bahamas is also the recipient of an injunction which caused it to have to stop operating and vacate the premises attached to a lease the carrier had with the Nassau Airport Development Company (NAD).

“There has been a lot of chatter publicly on matters related to Sky Bahamas. Most particularly, a court order, an injunction that was granted. And that injunction caused Sky Bahamas to have to cease its operation and vacate premises attached to a lease that they had with the (NAD). The court system will deal with that matter. I will not speak to Sky’s financial position.

“Notwithstanding the lateness of the application, and being desirous of facilitating activities associated with air commerce, we commenced work on the renewal for Sky Bahamas. Amongst other things….there were a number of issues that were discovered.

“We worked with Sky’s management team with a view towards resolving those issues. We have made some progress however our activities were stymied by Sky’s refusal to allow inspectors access to the premises as is required under the regulations.

“Again, nonetheless, my inspectors conducted a site visit. After finally being granted permission to access, and of the six findings that were still outstanding, we were able to resolve about half of them. The authority is still mindful and still willing to work with Sky Bahamas, notwithstanding all of the things that has gone on.”

Mr Beneby said one of the most serious outstanding issues resolves some of the carrier’s documentation.

“Sky Bahamas is not operating currently,” he noted. “They have been ordered out of the (LPIA). The BCAA had nothing to do with that. That is a separate matter altogether.”

When asked how no longer having a space in the airport affects the airline’s ability to operate, Mr Beneby said: “I’m sure it’s a challenge. Because one of the requirements is that you have to have an official place of business. And I’m not sure where they wold conduct their activities from if that matter is not addressed.”

Last week, Captain Butler told Tribune Business he would step aside if he was the sole obstacle to the airline restarting operations.

When asked about this promise, Mr Beneby said: “The Authority is required and authorised to assess the competency and capabilities of all of the management personnel within an entity. There is a particular person in an airline that is the accountable manager. And that is the person who has the financial, organisational, operational authority to ensure full compliance with the regulations. If the Authority is no longer satisfied or not satisfied that the person holding that position meets the requirements then the Authority will not approve that person for that position.”

Mr Beneby said the last time there was communication with Captain Butler was two weeks ago, noting most discussions have been between attorneys.

When asked if communication has broken down, he replied: “I think it has been strained, to be quite frank. But notwithstanding that, we remain willing to engage Sky Bahamas Limited with a view towards having this matter resolved as it relates to the Authority.“

Yet Pineapple Air and Southern Air are up and running. Their fuel fumes are horrible and there is a lot of shake, rattle and roll going on.

If a politician says “SB is not being singled out”, well, what it means exactly is, SB IS BEING SINGLED OUT! Politicians always contaminate truths with lies. With all the advantage and advancements in communication today it’s simply insane for people to go on depending on politicians (or even preachers) for definitions, information and truths. ITS SIMPLY INSAIN!