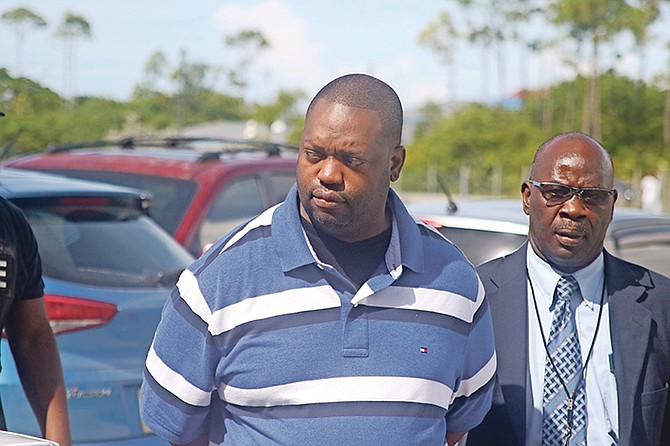 A 42-year-old man was charged yesterday in Freeport Magistrates Court in connection with electricity theft and causing damage to Grand Bahama Power Company property in March of this year.

Michael Neymour Jr is the third person to be arraigned in the matter involving the alleged installation of fake energy saving devices at several businesses in Freeport. He appeared before Magistrate Rengin Johnson in Court Three.

Neymour Jr is the son of businessman Michael Neymour, 63, who was charged along with Bernard Clarke, 43, on March 28 with several counts of abstracting electricity and causing damage to GBPC property to the tune of over $650,000.

It is alleged that the men allegedly abstracted electricity between January 2018 through March of this year, and fraudulently used electricity and caused damage to the power company’s property at several major businesses, including Pollo Tropical, four Burger King restaurants, Sav More Drugs, Island Seas Resort, and a KFC restaurant.

Both men at the time pleaded not guilty to the charge. Wendell Smith represented Clarke, and Brian Hanna represented Neymour Sr.

During yesterday’s arraignment, Carlson Shurland represented Neymour Jr. Before the charges were read, Mr Shurland told the magistrate that he was concerned about the treatment of his client during his arrest.

He said that on Sunday, August 11, he went to the police station to visit his client only to find out that Neymour had been transported from Nassau. He was sent to Freeport and arrested and taken to the police station. While in custody, he claimed that his client was not well as a result of having a high blood sugar reading of 400 and was rushed to hospital and put on an IV. “In process of surviving a blood comatose condition, the police say let him die,” Mr Shurland said. “He was put on a plane and then officers had taken him to the Rand (Memorial Hospital).”

Magistrate Johnson then had everyone leave the courtroom, including the press.

Neymour Jr pleaded not guilty to all counts. Bail was denied and he was remanded to the Bahamas Department of Correctional Services until November 11 for trial.

GBPC filed a complaint of electricity theft with police after conducting a metre audit which uncovered a series of electrical diversion instances in the Freeport area. Power supply was disconnected at several businesses, including fast food restaurants, a timeshare resort, and a drugstore/pharmacy, which had allegedly purchased what they believed was an energy saving device, which was later discovered to be a fake device and a smokescreen for electricity diversions.