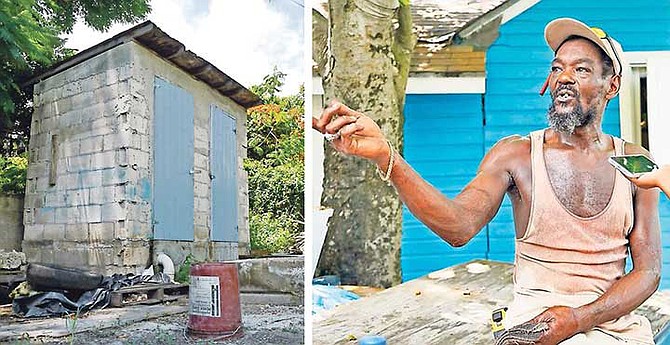 Eugene Davis points out the outside toilets on Lucky Heart Corner, left. 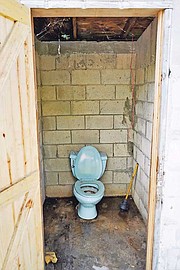 CRYSTAL Miller is a 30-year-old mother-of-two. In this modern Bahamas of luxury resorts shares and affluent tourists she, like many other ordinary people, still has to use two outside toilets along with five people at her home in Centreville.

She is among the many residents of New Providence who with no indoor plumbing and who have to to “tote” water from a pump when she and her young children wish to use the restroom.

It’s a problem the government recognises but an end seems a long way off.

Over-the-Hill Revitalisation Project Manager Rocky Nesbitt confirmed to The Tribune the government is still “focused” on eliminating outside toilets. This fall the revitalisation programme will begin conducting assessments to ensure renovations to accommodate indoor plumbing in these homes will be “feasible”.

Mr Nesbitt said this initiative will be done in conjunction with the Water and Sewerage Corporation among other agencies.

Meanwhile in communities like Centreville and Bain Town which The Tribune visited residents still wait for change.

“They should help,” he said. “A lot of people need the help. Not everyone has the money to update (homes) like they want to. They don’t want the government to do everything. Just a little helping out.”

Mr Davis has been a resident in the area since the late 1980s and has always used outside toilets. He lives in one of three small homes on a property that has four outside toilets. The six occupants of these homes share these toilet facilities.

The 54-year-old shared with The Tribune what life is like with an outside toilet.

“You have to tote the water (from the pump). That’s about the hardest thing. Having to come tote water. Instead of just having the water connected to it.”

He said his landlord made some upgrades to the restrooms about a decade ago, noting the previous facilities “was a different type of outside toilet that didn’t have no bolts and stuff”. 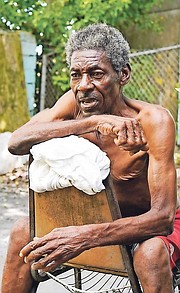 Lambert Arnette from Bain & Grants Town Constituency, just behind him is his outside toilet that is no longer in use. He is forced to walk to his daughter’s house to use the bathroom. Photo: Terrel W. Carey Sr/Tribune Staff

“So that’s why they get rid of that and they had to put down the cesspit and put bolts on all the doors,” he said.

Young mum Crystal Miller described the conditions of the outside toilets for her home as unsanitary.

“Just gotta use them, because the landlord don’t fix it,” she said. “Only if you clean it, it’s okay.”

She added she cleans the toilets when her two children, ages eight and seven, go to use the bathrooms, but lamented that other users don’t help in the task.

Ms Miller said in the year since she has lived at this residence, government officials have not come and offered assistance.

In Bain Town, 70-year-old Lambert Arnette pointed to the remains of an outside toilet in his yard. The toilet is currently boarded up.

Mr Arnette said he has to walk to his daughter’s house to use the bathroom.

“I have enough strength to hold it till I reach there,” he said.

He added government officials have promised to help in the past but nothing has materialised.

“They said they would do but they never came back around,” Mr Arnette said. “They said they was coming to do things but when they get in power you don’t see them no more.

“I need a bathroom, running water, everything.”

The Minnis administration has promised to eradicate outside toilets by 2025.

Centreville MP Reece Chipman underscored the importance of identifying the difference between pit latrines and outside toilet facilities with some level of plumbing.

“As far as I’m aware there are no pit latrines in use,” Mr Chipman told The Tribune. “You may have pit latrines because the outhouse covers them. But they are being used for storage and any other thing that people use structures for. But not to be used as a toilet. And that’s as far as I’m concerned, in my opinion.”

When asked if the government is still on track to eradicate all outside toilet facilities by 2025, Mr Chipman replied: “Well that something I would like to see done because of course it helps people to, in terms of their very humanity and dignity and of course their potential. And so I would like to see it.

“The government’s agenda - you know I’m not a part of the executive, I’m only a part of the legislature - I can only hope that that is the vision that they have and that would be what takes place.”

As for hitting the 2025 deadline Mr Nesbitt told The Tribune: “We are soon (this Fall) conducting assessments in partnership with Water and (Sewerage) along with other agencies to ensure renovations to accommodate plumbing in homes are feasible.

“We are hopeful to reach this goal but the process will begin shortly.”

As with many advances they come with a price.

“One of our concerns is, after providing inside plumbing, how will we address the adding for a water bill to certain homes,” said Mr Nesbitt.

“(We need) a strategic approach with communication to ensure the residents see the benefit of (ridding) the community of these outdated items.”

Our elected leaders should hang their heads in shame. This is SLOP's legacy - the Moses who left many of his followers still using outside toilets. Simply unbelievable!

"They said they would do but they never came back around,” Mr Arnette said. “They said they was coming to do things but when they get in power you don’t see them no more." Well monkey foot !!! This man mussy one big prophet like Elijah dem. Reese talk "pit latrines" now instead of "outside toilets" like during election. Cool. Crafty. Shagadellic.

Contraception and education are the two things that could reduce rates of poverty in this country, but too many people don't want either although they are basically free!