Insight: We Should Teach Our Children To Enjoy The Ocean, Not Fear It 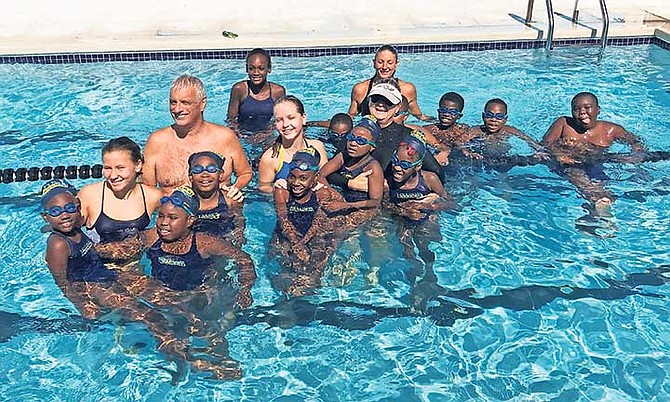 Only one in 100 government school students can swim, according to empirical data gathered by Andy and Nancy Knowles, the co-founders of the Let’s Swim Bahamas programme.

With seven drowning-related deaths occurring in the country last month, the Knowles’ are on a mission to teach water safety rules provide and swimming lessons to primary school students across The Bahamas.

The couple have been embarked on their missions since October 2008, when they launched a pilot programme for Thelma Gibson Primary School on St Andrew’s School.

Fast forward to 2018, the official launch of a pilot programme at the University of The Bahamas allowed five more schools to be facilitated into the project.

“It was at this point that we started to truly believe that our dream could become a reality - to teach Bahamian children how to swim,” states the LSB’s 2017-2018 report.

“It was possible for all the New Providence Government Primary School children (29,000+) to receive eight free swimming lessons during the school year with minimum interruption to their daily schedules.”

For the 2018-2019 academic year, 800 students participated in swimming lessons from 10 government primary schools in New Providence.

There have also been summer Kids’ Kamps in Long Island, Abaco, Eleuthera and Exuma.

“Each site has a Site Supervisor, which keeps track of the swimmers’ progress; a Marshall, who teaches Bible principles and Water Safety on the bus rides to and from school; a bus driver; (and) a minimum of 6-8 in water coaches,” the Knowles told The Tribune.

“The question is not about survival swimming, but being able to swim, period!” the Knowles said.

“Survival swimming implies a dangerous and/or unpredictable situation, which most times could be dealt with by knowing how to swim and/or applying basic Water Safety.”

For the couple, the definition of “being able to swim” means the ability to complete the Swim America Award of Achievement Certificate.

“The top skill to be mastered is being able to swim 300 meters Freestyle, which is also the swimming standard for the Bahamas Defence Force and the US Navy.

“After collecting 11 years of empirical data, a 20 percent sampling of the entire Government Primary student population reveals that when a student starts our programme, less than one percent of the students can swim.

“You can see that the situation is serious considering that The Bahamas as a country is 97 percent water!”

The Knowles have published a water safety colouring and activity book which has been endorsed by the Ministry of Education.

“While distributing the Water Safety books in 2014 to the various schools in the Family Islands a common thread of a water tragedy was discovered.

“Multiple drowning had occurred because of people being trapped with the rising tide, not being aware of the tidal changes and currents.”

An example that has always stood out in Andy’s mind was being told of five children in North Eleuthera who drowned when they became stranded on a sand bank and attempted to swim back to shore with the rising tide.

“We believe that most water tragedies could be avoided by applying basic water safety rules,” they said.

“We drill these rules with the students during their bus rides back to school after their swimming lesson. Also, each classroom is given a Water Safety Poster with the rules on them and the teachers are encouraged discuss them with the students.”

When asked what it would take to expand LSB and ensure universal swimming lessons for primary schools students, the Knowles called for parents and guardians to “own” this programme for their youngsters.

This means if their child’s school offers LSB lessons, they must ensure the Ministry of Education $20/year account insurance fee is paid for in September, that the students have the school’s required PE kit and that they also purchase an LSB swim kit, which includes a swim suit, can, goggles. This can be purchased at “minimal cost” and can be used over several years.

The LSB registration form, along with money for kit items if needed, must also be returned by the programme’s deadline.

The Knowles’ added LSB is “always” looking for marshals and coaches.

“Of course, any programme of this magnitude needs funding. We are extremely thankful to all our sponsors over the years who have not only encouraged us verbally, but with money as well!

“The bussing transportation and swimming lessons are free for the students which means that the basic LSB expenses are the bussing and stipends for our volunteer coaches.

“We continue to diligently work on building our funding team of local sponsors.”

“We are in the process of changing the mindset of The Bahamas towards the sea from one of fear to enjoyment. We understand this takes time.

“Let’s Swim Bahamas is committed to changing this mindset and we believe that the future of The Bahamas involves embracing one of the greatest assets of our country – the sea.”