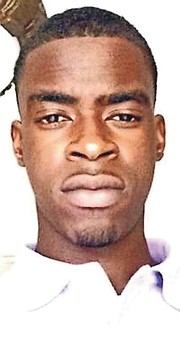 “SENSELESS” is how Sheralyn Anderson described the murder of her grandson, Dimetri Dormeus, who was shot and killed with his best friend, Dion Adderley, one week ago today.

With five murders in the last week, Ms Anderson condemned the level of violence in the country, describing it as “out of control”.

“It’s an alarming level and families are being hurt,” Ms Anderson told The Tribune yesterday. “And to me, it’s senseless. I’m still trying to wrap my head around the ‘why’ of it.

“The young people, the people with these powerful weapons, I just think it’s out of control. At some point, it’s just out of control. I know the police are trying their best, but I just think we need to get to the root of the problem in terms of trying to deal with it.”

According to police, a group of men were sitting in a yard on Maple Street, Pinewood Gardens, when they were approached by three armed men who opened fired in their direction, injuring two of them and a woman, who was inside the home, before running away. The two men were pronounced dead at the scene while the woman was taken to hospital and is in stable condition.

Last week, Adderley’s relatives told The Tribune this incident occurred at his family’s residence, where Dormeus often spent time. The young men were playing a game of dominoes before the shots were fired.

Ms Anderson, who lives on a neighbouring street, described Dormeus, who was a 2014 graduate of CV Bethel High School, as a kind, helpful grandson who was never in trouble.

She raised both Dormeus and his younger brother after their mother’s death when Dormeus was just five years old.

Describing him as a funny, shy, and humble young man who was a lover of music, Ms Anderson said Dormeus was a “totally” devoted grandson and great-grandson. She also recalled that Dormeus was integral in the care of his great-grandmother, who died a year ago.

“He was never in trouble with the law,” she said, noting he was often between his home and Adderley’s, as the two young men had a very strong friendship.

“Since that unfortunate event, I’ve had an outpouring of persons from this corner, the next corner, and everybody just couldn’t wrap their head around it to say why this happened,” Ms Anderson said. “Because everyone said he never bothered anyone. He always had a smile on his face. He would give you his last.”

Regarding how she is coping with the tragic loss, Ms Anderson said: “I am just bursting into tears several times a day, but I have a very supportive (network) – my sisters, my nieces, my coworkers, my friends.

“They’re all calling and they’re all dropping by. The house has been really a revolving door since it happened. So that keeps me going. The neighbours, they call and come to check on me.

“I have supportive people around me, but still, my heart is hurting. I had to bury his mother 17 years ago and now I have to bury him.”

On August 21, Ashton Smith was shot and killed shortly after 10pm off Cowpen Road.

On August 24, two men were shot and killed in the Family Islands –- one in Abaco and one in Eleuthera.

Shortly after 3am on Saturday, police found the lifeless body of a man with multiple gunshot wounds at a home in Marsh Harbour, Abaco. Another man was shot in the leg. According to police reports, a man had entered this home and fired shots.

Shortly before 9pm on Saturday, a man in James Cistern, Eleuthera, died after being injured by a firearm. According to police reports, three men were sitting outside a residence when they were approached by a man with a firearm who “opened fire in their direction, injuring one of them, before running away”. The injured man was later pronounced dead by medical personnel.

This brings the murder count to 60 for the year, according to The Tribune’s records; there were 62 murders at this point last year.