UK’s envoy: So much to work on together 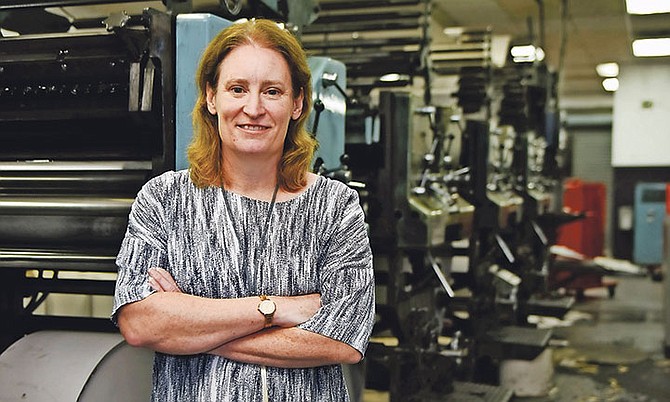 ACCESS to British visa and consular services will remain unchanged despite the return of a resident High Commissioner to the capital.

In an interview with The Tribune, High Commissioner Sarah Dickson revealed the diplomatic office will instead focus on building links on shared interests like climate, environmental and sustainability matters.

It follows a wider campaign to increase the UK’s presence in the region with a focus on independent Caribbean nations, and also around the world amid the looming Brexit deadline.

The office will be housed at the Balmoral but hasn’t opened yet.

“At the moment, (visa services) will stay the same,” Mrs Dickson said, “but I’m definitely going to listen and understand how things work here and then with that feedback we may change things or do things differently depending on what people are telling us.

She continued: “Actually the UK and the Bahamas, we’ve got quite a lot of values in common. We’ve got the same legal systems and democratic systems. . .I think we, the UK, have spent a lot of time with the areas that are still overseas territories and this is also about rebalancing with the independent Caribbean nations. It’s about increasing that relationship with those countries where we’ve got historic ties but maybe in the past few years we haven’t had such face-to-face government contact in the same way.”

Mrs Dickson also urged more Bahamians to apply for scholarship opportunities like Chevening - a global scholarship programme that offers full scholarships to study in the UK. Applications for 2020/2021 are open until November 5.

Mrs Dickson noted she was also personally invested in issues concerning sustainable development as she and her family would now call the Bahamas home.

She pointed to Greenpeace International study 30x30: A Blueprint For Ocean Protection, as one such initiative the two countries could benefit from collaboration. The study is the result of a year-long collaboration between leading academics at the University of York, University of Oxford and Greenpeace, and maps out how to protect 30 percent of the world’s oceans by 2030.

“That must be an area where we, both island nations, we can share ideas on how we can protect the ocean. We can work together in multilateral forums to promote climate, environment issues and wider maritime issues as well. Like the Bahamas, we’re shipping people, we’re fishermen, we live from and by the ocean as well. Also the sustainable use of the ocean and how you protect it but at the same time there are lots of people who make a living from the ocean, so finding that balance and working out how we do that together. I think that would be a very interesting area to look at where we can do more.”

Announcing the High Commission’s return back in July, Transport Minister Renward Wells said he looked forward to Bahamians no longer having to travel to Jamaica to “sort any business that is required with the United Kingdom”.

However, Mrs Dickson said the need for visas locally was not enough to support any shift at this time given.

Bahamian nationals do not need a visa to visit the UK for periods of less than six months. A visa is required for purposes of study, work or settlement.

“The visa system that currently happens won’t change with us coming because it’s the same everywhere, which is you apply online, you submit all your documents and currently we have once a month you have to give your biometric data for a visa at the Melia, twice in August because students are going back to school.”

She added: “We’re going to check in via those clinics to see if we’re doing them at the right time, the right place. Jamaicans need visas all the time so they run much more frequently there and if you miss the date (in the Bahamas) you can go to Kingston. Because it’s a much higher volume of visas there, they do the biometric collection more regularly in those places.”

Yesterday, Mrs Dickson was asked to comment on the possible impact of the UK’s withdrawal from the European Union - Brexit - would have on the Bahamas.

“Obviously there’s talks ongoing in Europe that I don’t know the detail of,” she replied, “but one thing that is absolutely clear the Prime Minister (Boris Johnson) has said, and that’s how he’s different from the last Prime Minister (Theresa May) is that we will leave the EU by the 31st of October.

“So I think that’s really clear and what that does mean is there is a difference now in the timeline for things that will happen in Europe, for negotiating.

“I think one of the reasons you’re seeing a wider UK presence around the world, because we’re not just opening a High Commission here in the Bahamas we’ll be opening offices in - well the nearest ones would be Antigua and Barbuda, St Vincent and the Grenadines, and Grenada but other places in the world as well.

“It’s because the PM strongly believes in us being an outward facing, open trading nation with a global vision that also involves having a really close relationship with European countries but that’s part of the reason that you’re seeing new High Commissions opening.”

High Commissioner Sarah Dickson revealed the diplomatic office will instead focus on building links on shared interests like climate, environmental and sustainability matters.

Translation: "Don't look to the U.K. government for any financial support or other assistance that would be costly to U.K. taxpayers. Boris Johnson may be PM, but I've been told to set up shop here with a low-cost leftist agenda."

Just what we Bahamians need ........ another 'green' diplomat. She will be an instant 'hit' with The Tribune's owners and senior editorial staff.

Amen to that. Why do they always look like this?