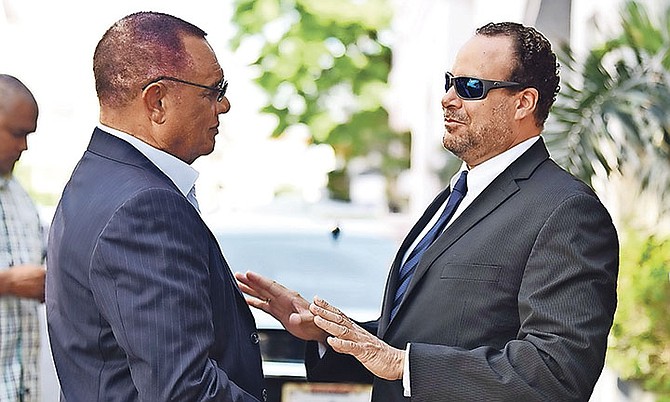 THE Court of Appeal has unanimously rebuked the Crown’s appeal of former PLP Senator Frank Smith’s acquittal of multiple bribery and extortion charges, marking the state’s second loss in what PLP supporters have called a political “witch hunt” against him.

Appellate Justices Jon Isaacs, Stella Crane-Scott, and Roy Jones concurred that the Crown’s appeal was “unsustainable”, as it failed to show what was “so clearly wrong” with Chief Magistrate Joyann Ferguson-Pratt’s decision to acquit Mr Smith of the 15 charges.

However, they said such issues “did not impact the result of the case to any significant degree”, as there was “an abundance of examples of doubtful testimony” from the Crown’s main witness Barbara Hanna that rightfully informed the chief magistrate’s decision.

And as the case “rested solely on the reliability” of Mrs Hanna’s evidence, the appellate judges said it would have been an “affront to justice” to have kept Mr Smith “on tenterhooks longer than what is absolutely necessary” and require him to answer to the allegations.

“We fail to see the utility or the justice in requiring an accused person to make a case in circumstances where the trier of facts has heard the evidence on which the prosecution relies to prove its case and has concluded the witnesses who testified in support of the prosecution’s case are not credible or reliable,” the appellate judges said.

Subsequent to the court’s oral ruling, Crown attorney Neil Braithwaite indicated the Crown’s intent to appeal the decision to the London-based Privy Council, and requested a date be set for the Crown’s application for leave to appeal to be heard.

However, such a request was soundly rebuked by the appellate judges, particularly Justice Crane-Scott, who said courts take a “dim view” of what she said is the “very unusual” practice of attorneys standing up “in the face of the court” to indicate their intent to appeal.

Meanwhile, Justice Isaacs noted that the Crown faced an even “more fundamental” issue: “You haven’t even read the decision of the court.”

When Mr Braithwaite maintained the Crown’s position, Justice Milton Evans, sitting in for Justice Jones who was unavailable, concluded: “And you have assumed that the decision is wrong without having read it?”

“We do not need to hear this at this point in time, which was the point I made initially,” Justice Crane-Scott concluded. “So put your house in order, and at some point, a panel of this court will sit and hear the application.”

After the hearing, Mr Smith gave thanks to God, his wife and family, and his legal team, spearheaded by senior Jamaican attorney Keith Knight, QC, who was not present yesterday, for supporting him in their various capacities throughout the trial.

He also gave thanks to “the framers of our constitution” who enshrined the country’s “system of checks and balances” that allowed for “justice to be done and also seen to be done”.

PLP Leader Philip “Brave” Davis, QC, meanwhile, said yesterday’s ruling represented a “great day for the rule of law” that should give the country further “confidence” in the judiciary.

However, he said Mr Braithwaite’s submissions in court were an “obvious” indication of the “politics” that have permeated both the trial and the appeal.

“The fact that the representative of the attorney general or the (director of public prosecutions) can get up in the face of the court—of course to be spanked by the court—to say they want a date for an application for leave to appeal to the Privy Council, that in itself is pure politics,” he said. “And as the lawyer was reminded, it was very inappropriate for him to have said that at that time. And it is inappropriate.”

Mr Davis added: “In fact, it’s questionable whether or not the Court of Appeal has the jurisdiction to grant leave to appeal in matters of this nature. And the process as I recall is that you have to go directly to the Privy Council to seek special leave to appeal. And in those circumstances, I think the court was right to admonish counsel and to put him in his place, for in the face of the court, almost insulting the court by asking for a date to be fixed to apply for leave to appeal to the Privy Council.”

In February, Chief Magistrate Ferguson-Pratt acquitted and discharged Mr Smith of 15 criminal charges against him.

Almost two years earlier, Mr Smith was arraigned before the chief magistrate on 13 counts of extortion, and one count each of attempted extortion and bribery.

The Crown’s case was that between April 2016 and April 2017, in respect of his duties as a public officer, Mr Smith demanded and obtained $5,000 per month from Mrs Hanna.

Concerning the bribery charge, it was alleged that he solicited $5,000 a month from Mrs Hanna for aiding her in getting a contract with the Public Hospitals Authority (PHA).

In her decision, however, the chief magistrate said there were numerous “inconsistencies” and “discrepancies” in the Crown’s case, which she further said was “undermined” by its own witnesses.

In particular, the chief magistrate said there were “inherent inconsistencies” throughout Mrs Hanna’s evidence, and that her claims were “manifestly unreliable” and ran contrary to “reason and all common sense”.

Chief Magistrate Ferguson-Pratt also criticised both Health Minister Dr Duane Sands and National Security Minister Marvin Dames for the “egregious” way in which they interacted with Mrs Hanna prior to a police investigation into her claims, charging that their conduct gave the appearance of a “political flavour to a curious bystander.”

The government appealed the chief magistrate’s decision, asserting that the judge took “extraneous matters into consideration” in her decision and that her conclusion was “unreasonable or could not be supported having regard to the evidence.”

In particular, Garvin Gaskin, the director of public prosecutions, who represented the Crown on appeal, said it was “wholly inappropriate” for the chief magistrate to have not only scolded Dr Sands and Mr Dames, but also connect it to her decision to acquit Mr Smith.

However, the appellate court dismissed the appeal because it did not show what was so improper about the chief magistrate’s decision that would require them to “interfere” with it.

And concerning the chief magistrate’s comments about Dr Sands and Mr Dames, the appellate judges said they “can appreciate” her concern “with how the prosecution of this matter progressed bearing in mind Mrs Hanna’s testimony”.

“We are satisfied that the chief magistrate did not err when she had regard to Mrs Hanna’s reliability as a witness when determining whether the prosecution’s evidence disclosed a prima facie case bearing in mind that the only evidence incriminating the respondent emanated through Mrs Hanna,” the appellate judges said. “In our view therefore, this appeal is unsustainable and accordingly, is dismissed.”

That's right. Frank will have his day, even if it's at the pearly gates.

Does begin restore populaces confidence when comrade High Court Justices, will 'call out' the crown's trifling the 'coaching of a crown witness,' yes, no .... Too damn bad when a minister appears more'hands on' over 'his' granting of a 'no bid; maintenance contract, than colony's junior doctors ..... Is this one step closer to populaces at-large witnessing royal intervention by colony's Queen ..... The Imperialists red shirts governing donkeys, must be unsaddled at some point ....

Mr; Knight QC said "The Bahamas should take heed the Countries judicial system if not stemmed will make the justice system of the Bahamas a laughing matter"

Should they the FNM government. Sand and Dames go to the privy council they will make themselves look even worse than they do right now. What a crying shame they all are.

They are frightening for sure,

The magistrate court has ruled, the court of appeal has ruled, now going to the privy council why, why waste more money that taxpayers don't have, this wasted money can be used for something useful, school uniforms for underprivileged children, etc. WHY?

Agree. They need to lick their wounds and move on. Plenty more PLP's to go after.

Ma Comrade, a must pretense governing politicians keep pretending tis worthy case be taken up by Privy Council of Judges - not spend PopulacesPurse's monies fight take up top court, will become opposition's main general election issue, yes, no ... Has remember not only is Carl Wilshire not an elected MP but IS a political appoint by the current prime minister ....

This was a waste of The People's money from get go. The case was too poorly presented to expect any other outcome. The amount of unprosecuted bribery, corruption and extortion in these Bahamas could fill one of our larger islands!

The justice system best serves special interests comrade Imperialists red shirts elected, when colony's justice reverts back 'plantation owners' justice in the seventeenth century, yes, no .... The 'fully colonialists' Bay Street Boys, despite having no constitution contend to with, are no match Imperialists red elected of today ....

Poorly Presented.? they had no case it appears to have been a set up. A thirst for blood.

No case? All this time I thought you were Bahamian. You from tim-buck-2 huh?

I agree with birdie. They had no case. The DA on law and order would never have taken this case to trial. (Because everyone knows law and order is the authority!) The main witness cracked before the first question. You can believe something is true but lawyers know "belief" is not enough to bring something to court. This was an odd distraction attempt from day one.

Astonishing that in a place globally known as a corrupt pirate laden country, the government cannot find one crook!

The PLP is not 100% responsible for the political injustices and piracy the country suffers.

If the FNM began by looking within themselves, they would have found several pirates in both parties.

Hubert Minnis, Carl Bethel, Duane Sands and Marvin Dames should be made to personally share the millions of dollars they caused to be spent in pursuing a matter that they themselves, through their own foolish actions, assured would result in an acquittal and eventual dismissal. Frank Smith, bank rolled by his father-in-law, better known as the evil Snake, will now get rich suing the government for a vindictive and politically motivated public besmirching of his reputation, which will now forever be tarnished in a serious way. And we taxpayers will get to foot that mega million dollar award against the government too. What a joke!