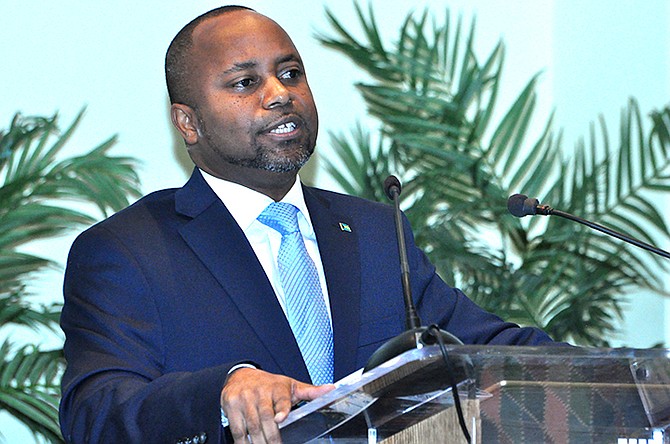 GRAND Bahama residents have been warned to expect severe flooding due to storm surge from Hurricane Dorian.

The advice came from State Minister for Grand Bahama Kwasi Thompson yesterday, who said there may be evacuation orders for some low lying areas of the island. “This storm has intensified, and, unfortunately, the storm’s track is moving closer to the island of Abaco and Grand Bahama,” he said.

Dorian is expected to strengthen to a Category 4 storm when it reaches the northern Bahamas on the weekend.

Senator Thompson urged the public “to take the storm seriously.” He stressed that residents should have started preparing, and those who have not, should do so now.

He said flooding is expected in a number of areas on Grand Bahama.

“So, we want the public to very keenly stay tuned for public announcements that we will make shortly about possible evacuation for some areas. There are areas in Grand Bahama that are low-lying and prone to flooding. We want residents in those areas to pay special attention, and to be ready if called on to move,” he said.

Mr Thompson said government is in full preparation mode and that all government buildings are in the process of being secured.

Iram Lewis, parliamentary secretary in the Ministry of Works, reported that all public schools and many government agencies have been secured.

“Our team is on the ground securing all government assets,” he said.

In response to calls about the use of the new Fishing Hole Road bridge causeway, Mr Lewis said that the causeway will be used only for emergency purposes, and manned by the police.

Minister of Agriculture and Marine Resources Michael Pintard appealed to residents to pay close attention to media reports and important information relative to the storm.

Persons renting and living in structures that are at risk because of damage from past storms should relocate, he said.

“We have significant concerns of (apartment) buildings already compromised by previous storms, and the GBPA in conjunction with the Office of the Prime Minister and MPs are available and prepared to work with residents who are concerned with the integrity of such structure to be relocated.

“Do not permit your landlord to make the decision on your behalf if you believe your building is at risk, this is a very significant storm.”

Mr Pintard also said that residents should contact emergency services if there are trees in their area that are too close to power lines and need to be cut back.

“We have tremendous challenges in restoring power after storms because (power) lines are damaged because of the trees. We are asking you to get hold of the emergency numbers for the power company, and government agencies to address the issue,” he said.

Mr Pintard said that there are a number of shelters on Grand Bahama that residents can access.

“Residents can also contact local government administrators and their MPs - you can call us 24 hours a day and we we will respond,” he said.