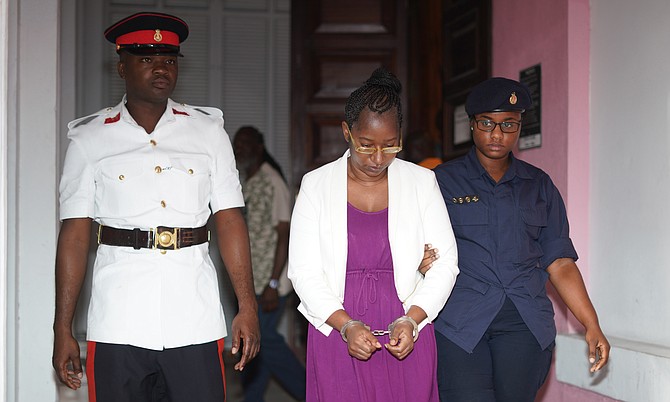 A schizophrenic woman who killed her two-year-old daughter by dousing her with gasoline and setting her on fire was ordered yesterday to spend six years at Sandilands Rehabilitation Centre as punishment.

Justice Bernard Turner said he was “satisfied” that Philippa Marshall’s mental disorder “is of a nature or degree” that warrants her being detained in a “hospital for treatment” for murdering Philicia Marshall two years ago.

Justice Turner said the decision was a “difficult” one to make, but said such a sentence would be the “most suitable means” of remedying the question of where Marshall would serve her sentence for the 2017 crime. In court, it was revealed Marshall had a family history of mental illness. after she complained of hearing voices from “demons”,  relatives had sought a pastor to perform an “exorcism” on her.

Justice Turner ordered the sentence be suspended for 60 days to allow SRC to make the necessary preparations to house Marshall for the next six years. She is remanded to the Bahamas Department of Correctional Services in the interim.

However, Justice Turner said Marshall could be released at an earlier date, but only pursuant to a medical report submitted to the court by a doctor with “special experience in the diagnosis and treatment of mental disorders”.

Marshall’s attorney Bjorn Ferguson, who had petitioned the court to sentence his client to five years at SRC for the crime, said Justice Turner’s decision was “very fair” and “just”. He further credited the judge for arriving at the “appropriate sentence” for such a matter, and in doing so dismissing the Crown’s calls for Marshall to spend 30 hard years in prison for the crime.

“Mental health is a very real issue in our country and the time has come for us to put the proper regime and laws in place to assist those who suffer from those disorders,” Mr Ferguson said. “And hopefully this will be the start of a movement to address that very serious concern in our society with mental health issues.

“…At the end of the day it’s a very difficult matter for the family, but they’re satisfied that their loved one will be able to get the help she needs, as opposed to just placing her in the prison and getting lost in the system, and the help that she really needs, it never comes.”

Mr Ferguson added: “I keep saying, yeah you might be punished and convicted, but one day you have to re-enter society. And so in this situation she’s able to get help and hopefully re-enter society and continue to be a productive person.”

During trial, prosecutors had asserted that the 41-year-old doused her child with gasoline and set her on fire at their home after “hearing voices”. Two-year-old Philicia suffered second and third degree burns on 43 percent of her body as a result.

That infection, according to pathologist Dr Kiko Bridgewater, likely set in during her hospitalisation at PMH. The lack of an epidermis, or the protective outer layer of skin, made it easier for the toddler to become infected in such an open environment.

As to what actually took place on the night in question, the evidence was that Philicia was laying down with her father and her two brothers on the living room floor of their Faith Gardens home, while Marshall was seen walking in and out of the house. During the course of the evening, her husband, Isaac Marshall, observed that his wife “didn’t seem right”. He also observed that he smelled gasoline.

At some point, Mr Marshall noticed his daughter was no longer on the floor in the living room with him. When he went to check on his daughter’s whereabouts, he was told by his wife that Philicia was in bed with her. Mr Marshall later fell asleep.

Later that morning, Mr Marshall was awakened by the sound of screams. When he went to check one of the children’s rooms, the door was locked. He eventually managed open the door with a knife, and when he did he saw smoke. That was when he saw Philicia in his wife’s arms with her skin falling off. According to the evidence, when Mr Marshall asked his wife what had happened, she did not respond.

A police officer, Sergeant Tamika Gibson, said when she arrived at the residence and gained entry that morning, she saw the entire family in the front room. Mr Marshall and the two boys were on the couch. Marshall was seated on the floor, attempting to put a pink sweater on Philicia, who was lying on a tan blanket next to her. According to Sgt Gibson, Marshall was getting the toddler dressed to go to the hospital.

Justice Turner, in delivering his sentence, noted that there is a history of mental illness in Marshall’s paternal family. He said both the woman’s grandmother and aunt are allegedly known as being mentally unstable.

As it specifically relates to Marshall, her mental issues apparently began shortly after the birth of her second child. After the child was born, Marshall began complaining of hearing voices in her head. Additionally, she would drive to the neighbour’s home in the middle of the night and blow the car’s horn “long and hard”.

Such actions caused one neighbour to shout from their window: “Stop working obeah!” Another neighbour said when she approached Marshall’s car during one of those episodes, it was as if the woman didn’t see her or hear her.

“It’s like her body was there but she was not,” the neighbour was quoted as saying.

Any number of clergy persons met with Marshall over her issues, and all said she needed to have those issues addressed by a mental health professional. However, one of those clergy persons performed an “exorcism” on Marshall due to the talk of “demons”.

That event, according to Marshall’s brother-in-law, was described as a “frightening experience”, such as he had never seen. He said during the event, Marshall could be seen “speaking without opening her mouth as if she had a demon inside of her”.

Notwithstanding those issues, Marshall’s brother-in-law John Carey previously testified that in the 25 years he has known the 41-year-old Marshall, she has never exhibited any “violent tendencies”.

And as it relates to her daughter, Mr Carey said Marshall constantly displayed “outright” and “genuine” concern for the child’s safety and well-being. As such, he said what took place in 2017 could only be attributed to Marshall’s mental condition.

Mr Carey referred to a situation that occurred in the days leading up to the incident in question, which took place at a Christmas dinner for their family at the Marshall’s residence. At that time, he said Philicia had started crawling towards a flat-screen television he had installed and mounted on a wall for Marshall’s family. A few wires were hanging from the television, which apparently sparked the child’s curiosity. As such, the baby reached out to grab them.

However, he said Marshall rushed to the baby and stopped her from doing so, and was “very much concerned”. Mr Carey further stated that Marshall turned to him and ask him if he could fix the wires so they wouldn’t be within the child’s reach “because she didn’t want her daughter to get hurt”.