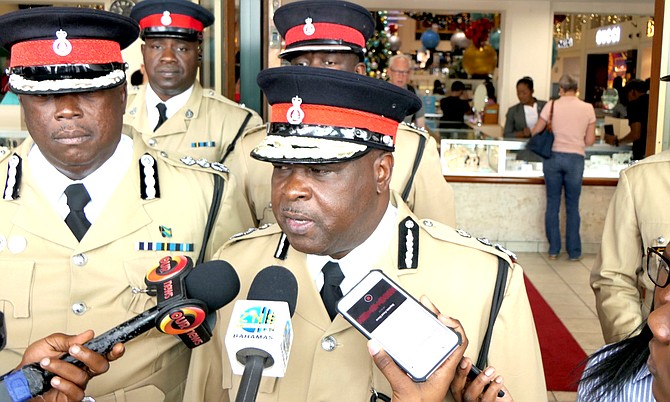 Speaking to reporters Tuesday during a walkabout in downtown, Nassau, Commissioner Ferguson said he believes everybody deserves a second chance.

“I think the simple thing is I supported (the saying) Jesus forgave people. And so why can't we forgive people particularly (of) those things that would hinder people from progressing?” he told reporters Friday.

Still, when asked whether police will continue to arrest persons found with the drug in their possession in view of the Bahamas National Commission on Marijuana’s preliminary report he stated:

“Until we get the direction from the law (the public should understand that) you ought not smoke marijuana.

The report, produced by the commission, calls for the decriminalisation of marijuana and for people to be allowed to have a maximum of one ounce of the drug in their possession without prosecution.

Yeah, no. Legalization on horizon brungs out vocal support even from ones who still physically locking up thousands individuals for simple possession weed. You can't make this up, you just, can't.

The government didn't ask a single soul any questions about following the U.S. failed war on drugs and destroying tens of thousands of Bahamian lives!

Now that the U.S. has moved on and legalized drugs, our government cannot "follow" them out of the failed initiative.

Might as well expunge the entire criminal record of everyone in the Bahamas. They serve no real purpose anymore given that Fox Hill Prison has been a revolving door for decades. With the prison overcowding situation one prisoner must be let free for every new one incarcerated. Most of the criminals in the country are living among us everyday free as a jay bird to prey on us. This is why violent crime in our society has become a daily occurence at just about any time and in any place, including the many gated communities that now exist.

Yeah, no. What about the records of comrade men's who over the years may have been criminally sentenced because judges and juries had thought they was acting likes too much gay and thought they shouldn't had been engaged homosexual buggery acts? You can't make this up, you just. cant not wonder what the pot legalization commission's preacherman's Bishop will have says about colony's legalization buggery?