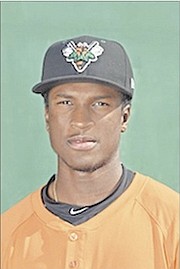 LUCIUS Fox is set to begin his 2019 season at an elevated status and continues his progression through the Tampa Bay Rays organisation.

Fox received an invite to the team’s major league spring training squad. Pitchers and catchers will report on February 13 with full squads following on February 18.

The Rays and Philadelphia Phillies will open up Grapefruit League action on February 22.

Last season, Fox achieved two All-Star appearances, reached the Double-A level and was listed as the Rays’ No.9 prospect.

The 21-year-old shortstop concluded the season with an Arizona Fall League Championship for the Peoria Javelinas in a 3-2 win over Jazz Chisholm’s Salt River Rafters.

In the title game, he finished 1-3 (double), drew two walks, with one run scored and one stolen base.

Fox advanced to the Double-A level for the first time when the Rays assigned him to the Montgomery Biscuits this season.

He previously spent 91 games with the Charlotte Stone Crabs of Single-A Advanced of the Florida State League.

“Going to Double-A in August, for that one month you learn a lot, and it’s not the ability anymore, it’s about the mental part of the game. I was able to see that for a month, and that helped me,” Fox told MLB.com.

“This opportunity has blessed me with the teammates that have been in Double-A and Triple-A and being able to see what they do before the game, how they prepare, what they think about pitchers, how they think about the game, it all makes me a better player. I’m taking it all in and learning something new every day.”

Fox said the AFL has served as a proving ground to sharpen his skills and improvement as he looks to further progress in the Rays organisation.