‘Thought We Were Saving Money, Pm?’ 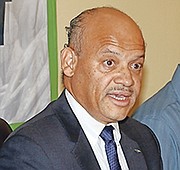 THE Progressive Liberal Party has criticised Prime Minister Dr Hubert Minnis for appointing Golden Gates MP Michael Foulkes as parliamentary secretary in the Ministry of Social Services and Urban Development, a ministry that saw cuts in the last budgeting exercise.

Mr Foulkes was previously the chairman of the Bahamas Agriculture & Industrial Corporation.Citing a need to balance the budget, Dr Minnis last year chose not to fill positions vacated by Bain and Grants Town MP Travis Robinson and Golden Isles MP Vaughn Miller, the former parliamentary secretaries in the Ministry of Tourism and the Ministry of Social Services and Urban Development respectively who were fired after voting against an increase in value added tax.

“We are now trying to balance the budget,” Dr Minnis said at the time. “That’s a saving of $90,000. Every great oak tree was once a nut. So we start small, and we build big.”

PLP Chairman Fred Mitchell said yesterday: “With an already oversized and ineffective political directorate presiding over the public service, the prime minister has seen fit to add yet another layer of bureaucracy with the appointment of former BAIC Chairman Michael Foulkes as parliamentary secretary after complaining about and promising to cut government spending.

“Further, we know that the government reduced the budget at the Ministry of Social Services and Urban Development, cutting back on social assistance to the most needy and vulnerable among us and in particular, the cancellation of the RISE food assistance programmes and the uniform assistance to children living in poverty.”

He also questioned what value would another politician bring to that ministry and the government should focus on expanding social services instead.

“The social safety net was pulled from under thousands of minimum age workers who were released from the public service in a downsizing exercise,” Mr Mitchell added.

“There still remains much suffering and neglect in the urban areas, therefore the sensible course of action would be an expansion in the delivery of social services to the benefit of the elderly, the working poor and unemployed.

“While cutting back on social assistance because of budgeting reasons, the prime minister conveniently found the money to line the pockets of and provide comfort for yet another political crony with a cushy job. This sends the wrong public message given the misery index among thousands of Bahamian families.

“This appointment, a glaring example of the mixed priorities this tone deaf and out of touch government is becoming notorious for, should be revisited.”

Parliamentary secretaries make $45,000 per year and receive a $3,000 duty allowance.

“I am pleased to have Mr Foulkes in this new assignment in the important area of social services,” Dr Minnis noted in the release. “He has shown leadership at BAIC and will make a valuable contribution in his new role.”

Bishop Gregory Collie has been appointed the new chairman of BAIC.

Just another shining example of the Minnis-led government being nothing but a spend, spend, spend, tax, tax, tax government. Minnis himself personally appointed Michael Foulkes to his new cushy position in government in order to allow him to continue sucking from the public treasury. What a joke! LMAO

Yes or no - wasn't there tax, denial practice law, issue over in Florida..... are we to presume be fully paid and settled?