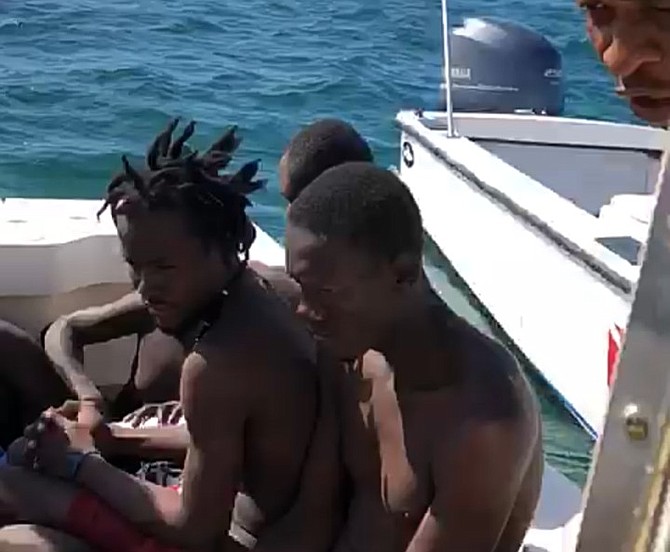 This story has been updated here: Death toll rises to 28

People rescued from sunken vessel off Abaco by Tribune242

Bodies being recovered after the accident.

SIXTEEN people are dead and 15 have been rescued after a Haitian refugee boat capsized off Abaco early on Saturday morning.

After the discovery of four bodies in the water near Man O War Cay at the entrance of Marsh Harbour by local residents, Police, Fire and Rescue Services, along with Immigration and Royal Bahamas Defence Force (RBDF) personnel stationed in Abaco, conducted a search near Fowl Cay and Man O War Cay. 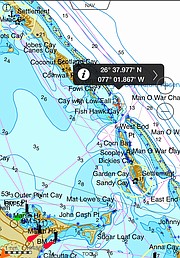 A map of Fowl Cay and Man O War Cay showing the approximate position of the sunken vessel. (RBDF image)

Officials were later joined in the search by an RBDF patrol vessel already in the area, Her Majesty's Bahamian Ship (HMBS) Durward Knowles and a United States Coast Guard helicopter.

Survivors after the accident.

A total of 15 Haitian nationals were found on the cay and were taken aboard HMBS Durward Knowles under the command of Lieutenant Commander Omarv Saunders.

They were subsequently transported to the clinic in Marsh Harbour for evaluation, and handed over to Immigration and police officials for further investigation.

A submerged vessel was later spotted by the USCG helicopter on Saturday afternoon.

A dive operation by RBDF divers and a local diver found an additional twelve bodies in the vessel on the seabed in reef-filled waters near Fowl Cay.

The recovery effort after the boat capsized.

Video of the rescue operation and photographs quickly appeared in social media.

Images showed bodies on the front of one craft covered by hastily thrown tarpaulin.

In another a man's body lay on a beach just out of the water as emergency personnel prepared to recover it.

Survivors - mostly just dressed in their underwear - included at least one woman.

A diver working on the recovery effort.

Survivors of the tragedy on a bus after being rescued.

I am guessing based on where they wreaked they are sailing along the east side of the Bahamas in the open ocean on the Atlantic side, very hard to patrol that.

Your question should why not how. They can stay 50 miles off shore in international waters. The why is because there is work in abaco. Charge the employees and make an example of someone. As soon as bahamian stop hiring them they wont hang around for long...

Yes, or no - ma comrades, some things remain same we Colony of Out Islands. Back a long whilst when I was 17 years or so, it was not out norm come across the drowned bodies of adult and children Haitians washed up on Yamacraw Beach. In fact, on the early morning just hours in December 1962 -before US president John F, Kennedy was to arrive for his morning swim at Montagu Beach, myself and criminal lawyer Dickie Curry, had observed drowned Haitian corpse teenager male - being removed off Montagu Beach.

Mr. Yes or no, why don't you take a crash course in the english language so that you can construct a sentence properly !!!

amen to that brother "rawbahamian". My heart goes out to all the lost souls off the Haitian sloop. RIP.

These unfortunate incidents would be less likely to occur if Haitians in Haiti contemplating fleeing got the message that The Bahamas (like the U.S.) would now be properly enforcing a zero tolerance policy for Haitian illegal aliens. It also does not help that we have this silly and quite costly arrangement with the U.S. whereby illegal Haitian aliens captured by the U.S. Coast Guard are brought to New Providence for processing and eventual return to Haiti even if intercepted in international waters. Can you imagine our Defense Force ever being allowed to intercept Illegal Haitian aliens in international waters and then simply drop them off at the Port of Miami?!

I am really surprised only really the tribune and facebook is carrying this story. Cant find it anywhere else...

A truly gut wrenching affair, but who picks up the bill for repatriation of remains??