There Are Grounds For A Civil Suit - Davis 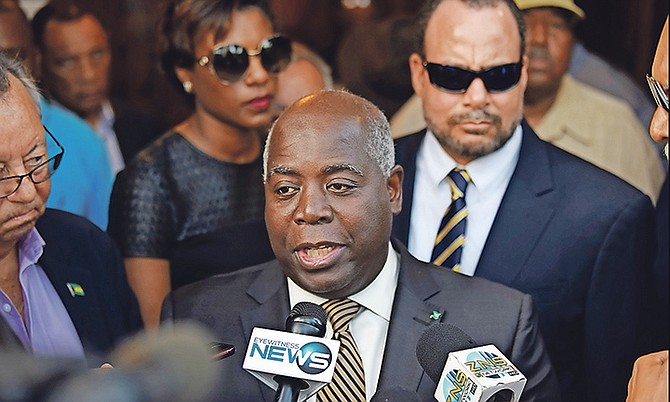 OPPOSITION leader Philip “Brave” Davis said yesterday there are grounds for a civil suit to be considered in the aftermath of the exoneration of former PLP Senator Frank Smith, although he added Mr Smith cannot be “compensated monetarily” for the ordeal he and his family have experienced.

Mr Davis made these remarks yesterday during a press conference held at the Progressive Liberal Party’s headquarters, where he also doubled down on calls for the resignation of the Cabinet ministers who were involved in the bribery case – Health Minister Dr Duane Sands and National Security Minister Marvin Dames. Mr Davis also called for further scrutiny of the Office of the Attorney General in the aftermath of Mr Smith’s acquittal.

On Friday, Chief Magistrate Joyann Ferguson-Pratt acquitted and discharged Mr Smith of all 15 criminal charges after finding fault with numerous “inconsistencies” and “discrepancies” in the Crown’s case, which she further said was “undermined” by its own witnesses.

“I think it’s very important to get the written script, the written judgment of the magistrate to aid in preparation of any case for malicious prosecution and the like going forward. And I think that might be the only, last piece of the puzzle, for counsel to give its proper advice on the way forward in respect to the damage to reputation incurred to Frank Smith, and of course the…uncertainty and anxiety visited upon his family over the last year with respect to this matter.

“He cannot be compensated monetarily for it but I think… just for the purposes of the principle, to ensure things like this never happen again. This is (a) complete departure from the norm.”

Regarding any possible parliamentary action, Mr Davis said: “We have not caucused on what action we will take in Parliament as yet, (with) regard to this.

“This is our first step towards ensuring that the administration with justice could remain pure. And for it to remain pure, we have to purge the filthy water that (is) now flowing through a stream.”

In her ruling, Chief Magistrate Ferguson-Pratt criticised both Dr Sands and Mr Dames for the “egregious” way in which they interacted with principle witness Barbara Hanna prior to a police investigation into her claims, charging that their conduct gave the appearance of a “political flavour to a curious bystander.”

In the wake of these remarks, Mr Davis called for their resignations, saying it is cause for concern that ministers were “. . .acting out what seems to be a predetermined script written to fulfil a political narrative on corruption that was false from the start.”

“The learned magistrate recalled how the minister of health had been given a campaign contribution by the virtual complainant (Ms Hanna) by the minister’s own admission under oath,” Mr Davis said.

“The virtual complainant had a pending application for an extremely lucrative contract before the Public Hospital Authority, and based on sworn evidence, (Dr Sands approved) . . .that very lucrative contract and not the board. The board had concerns about this award and referred the process of the award to the internal auditor to investigate for impropriety.”

Quoting the magistrate’s criticisms, Mr Davis said if these ministers do not step down on their own, Prime Minister Dr Hubert Minnis should fire them.

Mr Davis also criticised the Office of the Attorney General.

“The behaviour of the attorney general must also be reviewed and appropriate actions taken in accordance with generally accepted principles of ethical conduct having regard to the outturn of this case and specifically the cited conduct of his office during the Frank Smith case.

“Concerning the conduct of the attorney general, I note that lawyers are bound to act as ministers of justice before the courts,” Mr Davis continued. “There is no doubt in my mind that both the attorney general and the lead counsel for the Crown should have stopped this case before it reached the stage of a no-case submission.

“This is certainly an issue to look into to determine whether the attention of the ethics committee of the Bar Council should be engaged.”

Mr Davis went on to say this matter reflects the “moral and ethical character” of everyone from the nation’s leader to the “ordinary back bencher” of the Free National Movement.

Regarding whether this could set a precedent for any future incidents of Cabinet ministers being hauled before the courts should the PLP be elected, Mr Davis said he could not speak to that at this time.

“All I could say to you is this: We follow the law. What they have done is a complete departure from the norm. They did not follow the law. That’s why the magistrate could have remarked that the process…was inappropriate.

“So we will follow the law. There will be no filthy water contaminating our stream of justice.”

He also provided the media with copies of a letter he sent to Dr Minnis on July 18, 2017, regarding the arrests of former Deputy Speaker Dion Smith and former PLP Housing Minister Ken Dorsett.

In the letter, Mr Davis noted: “There are consequences for these things too. And mark me well: the persons responsible for what I had described will one day stand before the bar of justice to answer for what they have done — and are still doing.”

Yes, or no - is it poor judgment for a comrade leader Queen's official opposition to lead bidding charge for possible civil law suit...... not likes what is seen as just and fair acquittal should be taken as absolute redemption PLP's governing ways, yes, no?

You are right Tal. They should remember that a civil suit is on the "balance of probabilities". That can cut both ways. O.J. Simpson got off the murder rap only to lose the civil action because of the reduced burden of proof.

Dames and Sands are smarter than doc. so doc dare not touch them.

In a properly functioning westminster parliamentary system of government in any other country of the world, Minnis, Sands, Dames and Bethel would have each voluntarily resigned by now with their head hanging low in utter public disgrace and humiliation.

no, they would not. What an idiotic assertion.

You're probably right from the standpoint that the Westminster system expects MPs to be more loyal to their political party and party leader than to the constituents who elected them. After all, Christie was able to very publicly give most Bahamian voters the "birdie finger" with absolutely no consequence until general election time. Perhaps we should become a republic with term limits for all elected officials.

... but in a country where the Westminster system is a tool of convenience, anything goes!

Only in the Bahamas does a politician get kickbacks from a contract, steals from the Govertment and then turns around and sues the Government to get even more money.

Darn it! I missed my calling.

Leslie Miller I know you're watching this....

Careful.. the courts have ruled that this was not the case. You can be in for some legal ramifications.. Tribune ?

NO. . .the court DID NOT RULED THAT IT WAS NOT THE CASE. . .it ruled that he had no case to answer. . .hence the reasoning and grounds for an appeal. . .the judge ruled that the evidence did not convinced her. . .and she think that the case should not go on to the supreme court!! The AG thinks it could. . .hence we have an impasse. . .therefore the supreme court will decide!!!

LMAO@Licks2. Damn! You're creating your own court case and legal process. This was a case being tried in the magistrate court. What I'm really saying is that your assertion is idiotic.

In case you don't know. . .Magistrate cases cannot exceed $5000 or 2 years jail time! That case was Preliminary Inquiry. . .which are usually done in a magistrate court before moving forward to the supreme court by testing the evidence at the stipendiary level!! Mr. Smith did not accept a VBI so his evidence was trashed out at the lower level and the judge was supposed to order a moving onto the SC!! I would rather be idiotic any day that to be ignorant and running on with little or no knowledge of what you speak!! This is the same thing I am always telling some of you around here. . . YOU DON'T UNDERSTAND WHAT YOU ARE TALKING ABOUT . . .REALLY!! THE SUPREME COURT WILL HEAR THE APPEAL BECAUSE A MAGISTRATE COURT CANNOT HEAR THE APPEAL FOR ANOTHER MAGISTRATE COURT.. .SO ON TO THE HIGHER COURT! I guess you can take back that laugh aye? I suggest that if you have a lawyer friend. . .ask that person of the court process. . .THEN SIT THIS ONE OUT. . .

OMG. I do know. That was no preliminary inquiry. A criminal case being tried in the magistrate court where the magistrate made a ruling that the defendant had no case to answer. Limits on civil damages that can be sought at this level is not relevant. Reading comprehension is vital for those who want to lecture.

Magistrate courts are bared to try any case with a money value above $5000. . .civil or criminal. . .THAT CASE WAS A PI . . .THERE WAS NO VBI. . .a VBI would place them before a jury. . .they pick a PI before a judge first. . .that is why she ruled on the veracity of the evidence . . .the evidence to take before the Supreme Court. . .not if the crime took place!! It seem that you are unaware that ALL murder High crimes cases go to the Magistrate courts before they go to the Supreme Court for a PI? The litigant decides if the case will bypass the Magistrate PI level and go straight on to the Supreme court for trail in cases above $5000. . .it is call voluntary bill of indictment.

The level of lecture is determined by the level of ignorance a stakeholder brings to the dialogue. . . obviously you don't know how the courts work yet you continue to argue. A little reading will not harm you. . .in fact it will help us! The habit of lecturing some of you around is a necessary evil developed from watching yinna attempting to dialogue from a one dimensional view point. . . usually political likes or hates. . .which usually goes well until you have to abandon ya favorite pet peeve. . .then to maintain ya point in the face of contrary evidence turns to stupidity in reasoning skills!! Then from there yinna as a point of course go down into dumbness and childish name calling or some other stupid childish nonsense! This site is pervasive for such pea-brained dialogue style!!