Don’T Risk It: Desperate Haitians Told Not To Gamble With Perilous Voyage 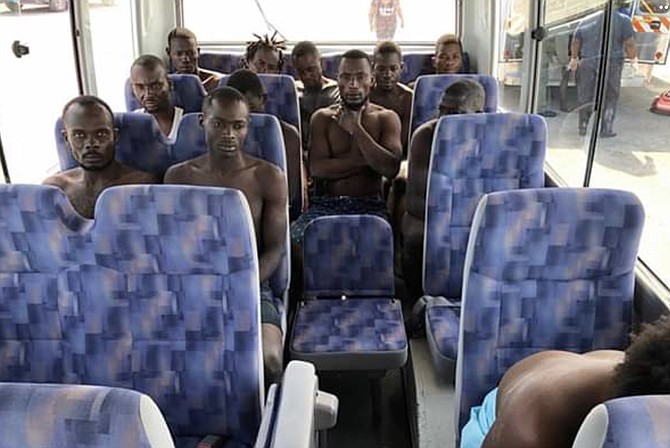 Survivors of the tragedy on a bus after being rescued.

IMMIGRATION Minister Brent Symonette has appealed to migrants contemplating the treacherous journey from Haiti to consider applying for work permits before risking their lives to enter The Bahamas illegally.

In the aftermath of the worst migrant boating tragedy since 2013, the minister offered this as an alternative, but noted that even if non-Bahamians successfully enter the country undocumented they will most likely be apprehended and repatriated. Foreign Affairs Minister Darren Henfield further urged would-be undocumented migrants to “think twice”, adding that as a former Royal Bahamas Defence Force official he’d seen this unfortunate kind of situation too many times.

The Cabinet ministers spoke as a pathologist and coroner were sent to Abaco to process the bodies of 27 Haitians who died after the boat they were on hit a reef and sunk Friday night. Eighteen people have been rescued so far, according to officials. Initial numbers from law enforcement had the death toll at 28 with 17 survivors, however these numbers were incorrect, officials said yesterday.

Mr Henfield also confirmed a request was made yesterday by the Haitian Embassy in New Providence for the bodies to be turned over to them for burial.

Some survivors told rescuers they had been at sea for seven days when all hell broke loose near the Abaco cays on Friday, The Tribune reported on Monday.

The survivors were being interviewed yesterday as officials try to understand the circumstances of their travel here, Mr Symonette told this newspaper.

“I wish they would not contemplate the trip,” he told The Tribune yesterday, “putting their lives at risk and we’ve seen what has regrettably happened in the last couple of days.

“If they had applied for work permits or that type of thing we’d try and process them, but not to put their lives at risk because once they are apprehended then we’ll send them back to Haiti in any event.”

For his part, Mr Henfield said the journey is just not safe.

He said: “With my background coming from the defence force, I’ve seen these incidences one too many times and so a part of our effort is to communicate to Haitians those who are thinking about migrating to the Bahamas about some of the dangers because sometimes these trips can go horribly bad. Apart from being possibly apprehended and repatriated, you can actually die as we are witnessing now.

“This is a very dangerous journey to take across the Windward Passage and enter into the Atlantic and begin to move on these vessels that are unsafe,” Mr Henfield also said. “There are no life vests, no saving apparatus on them. Most of the people who come on these boats can’t swim. So if something goes wrong, as they often do, then we end up with these kinds of unfortunate events and tragic outcomes. So I would hope that people think twice before embarking on these journeys to come to the Bahamas.

The migrants’ vessel struck a reef well-known to be dangerous and the boat disintegrated into two halves, volunteer rescuers told this newspaper on Sunday. The dead were first spotted by tourists in a 55ft chartered catamaran early on Saturday morning. The tourists saw two floating bodies and sent a mayday signal, according to Troy Albury, head of Bahamas Air Sea Rescue Association on Guana Cay and the first rescuer on the scene.

Mr Albury said more than four hours likely passed before anyone knew what had happened. Rigor mortis had set in by the time he neared Scotland Cay shortly after 9 o’clock that morning, he said.

Of the dead, 23 were reportedly recovered near Fowl Cay where their vessel was shipwrecked six miles off the coast of Marsh Harbour.

On Sunday, the Department of Immigration said 87 people were allegedly on the vessel, according to unconfirmed reports from survivors. However, volunteers told The Tribune multiple survivors told them about 45 people were on board.

Rescue operations on Sunday were hindered by tiger sharks that circled the wreckage and ate human remains.

The incident was the deadliest migrant shipwreck in Bahamian waters since 2013 when at least 30 Haitians perished on an overloaded boat headed for the United States. At the time, 110 people were rescued, including 19 women, according to previous reports.

Kinda stupid to say. They ain't listening. Probably one sloop full of Haitians landing somewhere in this country every day! Once they land they are quickly assimilated into their communities!

It seems that if we had the kahunas to send a strong message that they were not welcome we would not have this problem and lives could be spared! I won't be surprised of some who are on that bus are wearing 'Roc Wid Doc Again' t shirts in three years!

Kahunas? That’s a Hawaiian word for priest or sorcerer. I think you were reaching for “cojones”, a Spanish word for “balls”, or “guts”.

As for the guys on the bus, I wish some kind soul had at least donated them some used T-shirts, regardless of the slogan, or whether the shirts were red or yellow. Much as we disdain illegal immigrants, a little basic kindness would be very Bahamian.

Kahunas- over the hill Bahamian for 'balls'.

Joeblow, do describe the type of "strong message" you are alluding to?

Close the loop in immigration to ensure passports and other documents cannot be purchased undercover. Have a database that denies any illegal immigrant who lands here (after fingerprinting and other biometrics) the right to apply for any kind of residency or work status at any point in the future. Deny any child born to illegal immigrants who cannot prove Bahamian parentage via DNA the right to apply for any kind of Bahamian residency or work status upon turning 18, Confiscate the property or possessions of those found to be working here illegally. Enter them in the database and deny any future residency or work permits, just for starters

In other words if you come here illegally you will never be allowed to work here and any children you have here will be denied future benefits as well!

Too sensible and politically incorrect for da gubment dem.

Joe, I agree with you in theory, but biometrics and DNA tracking are a bit far-fetched for a government than cannot keep the lights on or the water running.

The gov't should have biometrics as a part of national security. Hell, they just borrowed $30 million to sit in an account IN CASE they have a hurricane emergency. Applicants can pay for the DNA!

The government should also be able to provide a reliable supply of electricty and water. Dream on, my friend, dream on ...

We should send our large metal defense force boats to Haiti to transport them safely. They are coming here for jobs and free land and free school and clinics etc. They will come for these things in any case.

At least if we send defense force boats to be stationed 7 miles off the coast of Haiti in international waters, their sloops could just meet up with our ship and they hop on.

One of them could volunteer to take the sloop back to shore and return 4 days later with another group.

This would be the most safe and humane way to proceed with the inevitable.

LOL thing is it's going to happen anyway so what you're saying is correct.

These people think Bahamians are stupid as if they're risking the trip just to come here to surf and drink gully wash..they know full well the benefits of coming here as you mentioned.

There is little one can do to tell a hungry man not to try feed himself. Not to try find a better way of life for himself and his family. And the only way to end this 100-year-old tragedy in Haiti is to end the invisible embargo against that country. Action brought against that country only for the part in helping to bring an end to slavery in this part of the world and helping to free their fellow brothers who were enslaved. And so they continue to pay the sometimes, deadly, price for freedom. Maybe its time for the Nations of the Caribbean to come together and help Haiti get back on its economic feet.

I remember flying into the Dominican Republic once, and on the island of Hispaniola you could actually see the border from the air: On the western Haitian side, everything was brown and burned out; on the eastern DR side, everything was green and growing. It was a sad and incredible sight.

That's why i say we should transport them safely here. We could also finance lumber and stuff for them to build homes on free Crown Land.

Yes, or no - just what the shirtless comrades need after surviving man-eating sharks - is a stern lecture by the chief red elite among 10 most powerful families who hold a disproportionate amount of wealth, privilege, political power, over all rest people.. Yes, no Mr. $700 million Brent, can you not spare dozen or so t-shirts and without torch's logo? I remember that fancy plane that PM Minnis and his delegation - took flight to the Dominican Republic to donate monies?

Score a double-victory for Tal: A reasonable point, and written in a sentence structure we could actually understand! Well done.

TAL, You are an IDIOT and always have been along with those who agree with that shallow statement you made. You are so deep in the PLP you cannot differentiate national issues from your personal dislike for the FNM. Stop liking man, that is Brent's money. The Haitians need to hear that message.

The majority of the boat people make it safely---That spreads the news that we welcome them with open arms!!

@Gotoutintime......ACTUALLY TRUE AS EXPECTED.......,!!!!!!.......see... google .....Nassau Guardian Haitian League.......date 8th January, 2019. The Haitian League of some 70 Pastors... Haitian Churches has their policy of sanctuary and their Chairman expressing their church beliefs of assisting persons illegal or illegal as much as they can...........FURTHERMORE..... it is their HAITIAN LEAGUE OF PASTORS AND CHURCHES policy of ....NOT....NOT.....asking them....fellowmen..... ILLEGALS OR LEGALS ..FELLOWMEN....SAME LANGUAGE......their LEGAL STATUS....!!!!!!!...... As much as Bahamian National Security trying to enforce Bahamian National Sovereignty......the Haitian League given admission..aufhorization by ...who...????...Authorities.....to exist in the Bahamas...AND the result encourages SANCTUARY.....repeated navigated...locate at direct locations....repeated and repeated regular encouragements to attract illegal migrants....While Haitian League can blame Bahamas for enforcing laws.... BIZZARE......Authorization ...facilated assisted as much as they can.... by Churches not asking if the persons in own lamguage.....IN ESSENCE....RESULT.....more an more boats keep on coming can fing sanctuary.....AND END RESULT...... BEING ...COMPLICIT.....ACCOMPLICE....ACCESSORY...ASSISTING ILLEGALS BROKING BAHAMIAN SOVEREIGNTY LAWS......EVEN MAY COULD BE JOINT PRINCIPAL.....IN A CRIMINAL ILLEGAL HUMAN TRAFFICKING....!!!!!!!!!!!!!!....ANY PASTORS WHO ARE BREAKING BAHAMIAN LAWS.....MUST BE JAILED....!!!!!!!!!.....