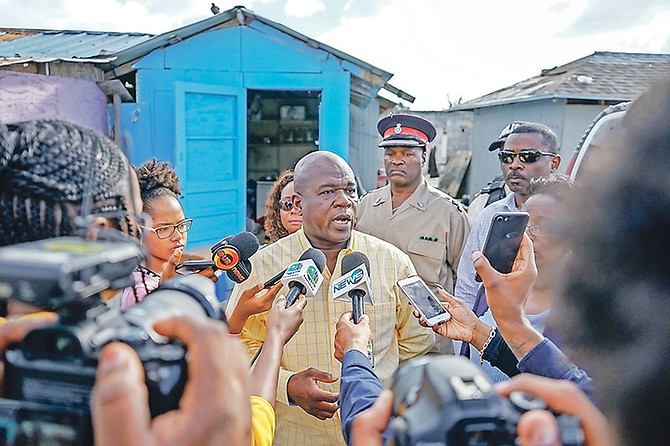 Chief Superintendent Solomon Cash speaks to the media at the scene.

POLICE shot and killed a man yesterday after he allegedly attempted to attack an officer with a silver knife in a shanty town located in the Joe Farrington Road area.

According to Chief Superintendent Solomon Cash, after 1.25pm the police launched a manhunt operation in the area to locate a wanted suspect.

"As a result of that, the officers went in separate directions behind the houses in this shanty town when they encountered the suspect," said CSP Cash.

CSP Cash said an officer approached the suspect and identified himself as law enforcement when the deceased pulled out a silver knife with a long blade, attempting to attack the officer.

He said: "The officer struggled with the suspect, trying to disarm the suspect, however the officer being in fear of his life at the time produced his service revolver and shot the suspect several times which resulted in him succumbing to those injuries."

CSP Cash also confirmed the suspect was a Bahamian of Haitian decent, between the ages of 20 to 24 and was not a stranger to police.

He added: "This was something specific as usual, once the suspect comes to the police’s attention, we send our men out in search of those suspects with an effort to try and bring him into custody to try question them on all the allegations that they are suspected of committing.

"If it is brought to the police attention that a suspect is wanted for any crime and the police have reasons to go and arrest these suspects, if these suspects are violently attacking the police or producing weapons resulting in the death of officers - officers knowing their training if they are in fear of their life, they will use their revolver or pistol to protect themselves from any harm or death."

The incident will now be turned over to Coroner’s Court for an investigation.

At the scene, the suspect’s relatives were emotional.

His mother said: "I heard two shots, three shots in the front. I started walking and I watched my son lay down (in his blood.) I tried to walk by my son, an officer said ‘don’t touch him. Don’t come any closer, go back’ so I went back.

Other area residents were visibly upset about the incident.

The Tribune understands the deceased is Ben Joseph, however his identity was not released by police.

The new culture of police killing. It doesn’t bear good fruit. Not really new just reintroduced. Some of the players are not new.

Culturally, Haitians do not recognize civil authority in Haiti and they bring that same behavior here and instill it in their children in the Bahamas. Haiti itself is largely unpoliced, road traffic laws do not exist, and vigilante justice is the order of the day!

This officer would have been carved up like a Christmas turkey had he not defended himself.

the eyewitness account is completely different from the police story. The law says a police must be in fear of his life in order to fire on someone. So every person the police kills has a weapon to attack or shoot the officer involved. But murder is murder.. The gun story was getting old and monotonous got it?

It might have been more accurate to say he was a Haitian claiming Bahamian descent! Any way good riddance!

The area residents were visibly upset however just don't GAF about living next to a known criminal? A criminal who had a weapon and attacked a cop? The epitome of how many criminals we have in our country ... it ain't a big thing living next door to them......

Shanty towns are an indication of poverty, not necessarily a monument for crime. Crime has no barriers. Unfortunately, the crime most people see manifests itself more in the poverty-stricken areas.

Reading this makes me sick.

The bumbling buffoon doesn't make any sense, much less have the ability to construct a sentence.

Right or wrong on the details of this story aside; CSP Cash is clearly not smart enough to be a water boy, much less a participant in our police service.

How are we expected to have any faith in the police service when they have idiots working there running the show?

Why can't they just fire all these uneducated useless cops and replace them with some proper police. Perhaps import some foreign cops, that would solve the corruption and lack of education all at once.

HE KNOW WHAT HE DID WHY HE GOT HIS ASS SHOT