Rolling Back The Years 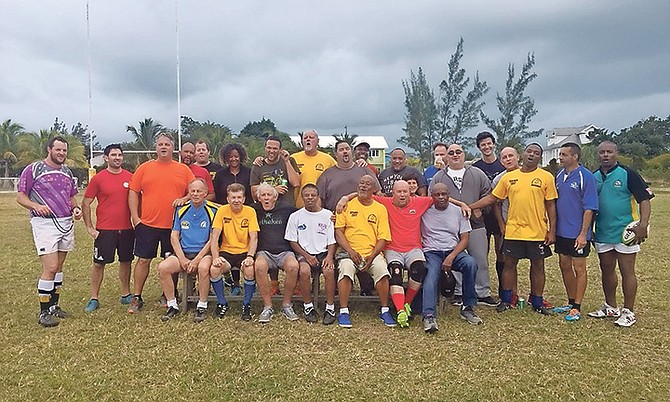 With no emphasis on the final score, it was an opportunity for players of yesteryear to show the younger generation how they did it in their day.

The day concluded with the Baillou Legends Banquet in the Nassau Yacht Club where a number of past players were honoured.

The banquet was hosted by Adam Darville and began with a reading of the club’s history by Peter Benjamin. Then dinner was served, awards were presented and players reminisced about the past – while others took to the stage to sing a few songs.

“I was very amazed by the turnout of the event, especially by the other clubs’ fan base for their cheering and support of each player who was honoured,” he said. “This event was mind blowing and it showed a great amount of respect for the former players who set the pace for Bahamas rugby.

“I was also granted the opportunity to meet J Barrie Farrington, one of the founding members of not only of the Baillou Rugby Club, but rugby in The Bahamas. It was an honour for me.”

Salabie said the event will definitely make a difference in the sport moving forward.

“I think the event would impact the sport in a tremendous way moving forward because bringing the old players together and seeing how they played and what they did for fun will encourage the guys who are playing now to be even better,” he said.

Salabie said the idea for the event was brought to the attention of the Bahamas Rugby Union. A committee comprised of himself, Peter Lunn, Stephen Thompson and Adam Darville planned the events.

The committee decided to honour J Barrie Farrington, Jon Isaacs, Richard Lightbourne, Mike Lightbourne and Peter Muscroft for the role they played in the formation of the club over the years. Stephen Thompson was also recognised as a former player and current head coach of Baillou.

The event was sponsored by Thompson Trading and Majestic Tours. Gift certificates were provided by Bahamas Fast Ferries, the Sports Center, Harbour Bay, and the Spritz Restaurant and Bar.

Salabie said they intend to make the tournament an annual one, but they will consider honouring past members over a longer period of time.

Baillou now prepare to travel to Grand Bahama for a regular season game against Heineken on Saturday at the Freeport Rugby Club. Following that, Baillou will take on the Buccaneers Rugby Club on Saturday, March 2, at the Winton Rugby Pitch.

The BRU’s playoffs will get under way on May 30.