There's No Cause For Alarm Over Conch, Says Gb Fisherman 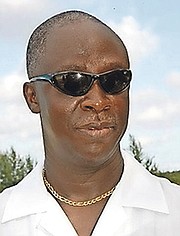 Fritz Thompson has been fishing for more than 39 years.

DESPITE scientists estimating The Bahamas’ conch population could be wiped out in 10 to 15 years, one Grand Bahama fisherman doubts the research.

Fritz Thompson, who has been fishing for decades, expressed strong concerns about recent articles published about the conch decline. He also does not believe studies conducted by scientists in the Bahamas warrant the local conservation of conch, citing his anecdotal experience.

“I have been fishing the whole northern Bahamas for over 39 years, I have personally studied the fish, conchs and lobster migration patterns here in our waters. I have used this information to make decisions on best fishing area and best times of year for different species,” he said. “The conch decline articles circulating have me very concerned. I do not share the same view of a decline.”

Recently, BREEF Executive Director Casuarina McKinney-Lambert responded to research that The Bahamas’ conch population could be wiped out in 10 to 15 years. She called for the country to “chart a new path” toward a more precautionary approach to sustaining resources.

Mrs McKinney-Lambert believes that in order to reverse the low conch population, there needs to be implementation of “effectively managed” replenishment zones, and for the country to address the issue of illegal harvest by poachers and local fishermen. “(Bahamas Reef Environment Educational Foundation) BREEF has been sounding the alarm about the situation with conch for decades, including the ‘Nassau grouper and queen conch status and management options’ report in 2002,” Mrs McKinney-Lambert said.

“This is a very vulnerable species whose populations have collapsed throughout the region. We want to make sure that this doesn’t happen here.”

In the wake of the research, Minister of Agriculture and Marine Resources Michael Pintard vowed to “aggressively engage” with stakeholders regarding conch conservation by beginning dialogue about a possible conch season.

Mr Thompson, however, who is also supported by other local fishermen, does not believe the research.

“We do have a serious increase in the rays, sharks and turtle population that are protected. Yes they all eat conchs and yes we do have poachers. Having all of these predators, along with local day fishers and commercial fishers, supplying our hotels, local restaurants, conch salad vendors, households and family members abroad, we have conchs,” Mr Thompson said.

He noted the country’s export quota started at 100,000 and has been raised over the years to 600,000. “We are meeting that demand because the conchs are there.”

In a press release issued in January by Shedd Aquarium, the group revealed its research on more than 3,000 conchs at 42 survey sites throughout The Bahamas between 2009 and 2017, shows not only are the numbers of adult conch decreasing, but the densities of legal-to-harvest queen conch are now far below the established minimum threshold for reproductive success, except in the most remote areas. Additionally, the research showed that viable fishery for queen conch in The Bahamas might only last another 15 years, unless significant measures are taken to cut fishing pressure.

The Chicago-based Shedd Aquarium carried out the research study with the Community Conch Group, and the findings were published in the scientific journal “Reviews in Fisheries Science and Aquaculture” last October.

Mr Thompson believes the scientific study of those 42 sites does not warrant an alarm for The Bahamas.

“However, one can raise the question of conch survival in the protected areas,” he stated.

He said in the area of West End, he has seen a proliferation of conch, for example. “West End was one of the sites mentioned. For those of you that know West End, it is famous for fresh conch salad and fried fish on weekends. On a bad weather day, I have seen guys swim just off shore and pick up conchs to sell to meet a fresh conch demand. They break them out there and discard the shells there,” Mr Thompson said.

When comparing conch and lobster, Mr Thompson said that it is easier to find conch. He noted that one conch produces one million eggs a year while one lobster produces half a million. He indicated that the country exports four million pounds of lobster and only 600,000 pounds of skinned conchs. He explained that any skin and guts are dumped in the sea, providing food for nearby fish. “Any cutback or stopping of this supply gives them no other choice than to eat smaller fish which will surely have a major effect on the decline of the fish population,” he contends.

“Being an experienced fisherman and knowing of our 180,000 square miles of waters, I would say that it would take about 10 years to cover all the conch aggregation sites and get a proper assessment.”

The study in question covered a period of eight years.

Of course there will always be more. We will never run out. Even after we take the last one, there will still be billions left

Our democracy does involve stakeholders having input. Regular elections have been held. And still the conch are collapsing. There's a disconnect between a high harvest of conch and a long term survival of the species. They are now endangered in Florida and have never recovered and probably never will. We are only on track to be somewhat later in time to this same end point as we had more conch, more islands and more waters.

Observations about catching adult conch that won't ever reproduce are not very insightful. Its like saying look I got 10 Dodo birds/we are fine a few years away from Dodo extinction.

If we are going to chose not to have a moritorium on conch harvest to have at least some chance the species can replenish, then lets just be honest about it and conceed extinction will occur. "Consulting stakeholders" means extinction. No one will ever chose to be out of a job. It would be as if Atlantic whalers were ever going to have been for the whale moritorium which got put in a few decades ago. BREEF has been going on about this since the early 2000s as mentioned above, so lets just stop all the pretending to care and that this will all be fine with more studies and a bit more regulation, and either accept a moritorium or extinction.

in all his travels and research he has never been to abaco because there ain much conch left there.

years ago there was an idiot who wanted to harvest shark fins in andros.

Over the last 50+ years there has been a substantial decrease. As a young person you could go to the beach and wade out a few feet to get conch. Today you can't see a conch anywhere in sight.

And no, I did not clean it out as I only collected one or two for personal fishing or for food.

If conch are so plentiful, why are they serving baby conchs at Nassau Fish Fri? The employee laughed when I asked about the tiny size of the conchs. He said we call them whelks, which is the name for a much smaller snail.

When I was a child you could find conchs in the shallows. . .just walk right out and there be conchs. . . don't talk about UE in San Sal. . .them conch them mussie wanted to go on the beach and cool out. . .they came so close to shore. . .water een been at my knee. . . plenty er them all about!!!

Go in Super Value. A 3-pound bag of (imported) conch cost $46.17. Yes, Forty-six Dollars and 1seventeen cents. There are food places like Bamboo Shack (how many locations), and the fish fry stalls that are consistently pumping out hundreds and hundreds of salads and conch snacks daily. And at a volume that never existed before in the history of the country. So there is pressure on the conch supply so as it is on lobster and scale fish. And from what was seen in the last apprehension of poaching vessels, when these boats come into Bahamian waters they raid with no mercy. So while there may be no cause for alarm, there is real cause for action, Conservation measures, and proper management.

this bozo in the dark shades has been fishing for 39 years , but he never goes too close to the edge of the world in case he falls off.

Wow, the IGNORANCE is unbeleviable! Where are your research papers? Bahamians will harvest conch until none are left.

Ask any conch fisherman, how many more gallons of gasoline are needed to find a fair days catch? & don't talk to me on $$ for that fuel. Why must it be All or Nothing? Manage when you have an Opportunity to Manage.

Something tells me that the Shedd Aquarium has some credibility.

Fritz and Trump !!! One denies our conch problem and the other denies climate change. Oh Lord, is there any hope for humanity? I was thinking about building an Ark. Is there anybody out there interested in a joint venture??

The good fisherman is completely wrong. I'm 69 years old. As a boy in many areas of Abaco conchs were so plentiful you dare not let your boat sit down on the bottom at low tide. Those areas no longer have conchs of any type--not just Queen conchs. The last time I dove conchs in Abaco I was in 15 feet of water. For many seasons I hunted pigeons in Andros. Where we always anchored the boat was completely full of very large thin lip conchs. The last time I was there none could be found. Don't get me wrong I like cooked conch but the sad fact is that we have eaten them to the point of extinction in only 69 years. The good fisherman has his head in the sand.

Mr. Fritz Thompson, the veteran fisherman pits his genius against decades of scientific research? This doubting Thomas is either not playing with a full deck, or his elevator doesn't go all the way up!

Regardless of how anyone could be as ignorant as this man, the fact is conch, grouper, crawfish, as well as other popular game fish, are not under threat due to Bahamian consumption or exports, the risk of extinction is mainly due to Dominican and American poachers, and there isn't one dam thing the Bahamas can do about it short of stationing a fleet of defense force vessels in fishing zones 24/7/365.

History suggests the Bahamas government and its defense forces have proven totally incapable of policing poachers and illegal migrants, which can only translate to the imminent demise as predicted and continued Haitian invasion.

That being said, the first missing line of defense in this to date inevitable failure at conservation of conch and grouper, is to provide consumers with acceptable substitutes.

Whelks are plentiful and could easily replace conch and there is any number of meaty fish that could replace grouper, several of which are equally delectable and in some cases even more so.

There is a much better chance of the Bahamas "praying away" the entire Island of Hispaniola than the Bahamas government getting control of it poaching and illegal migrants!