Insight: The Abaco Tragedy Tells Us It’S Time For The Gloves To Come Off 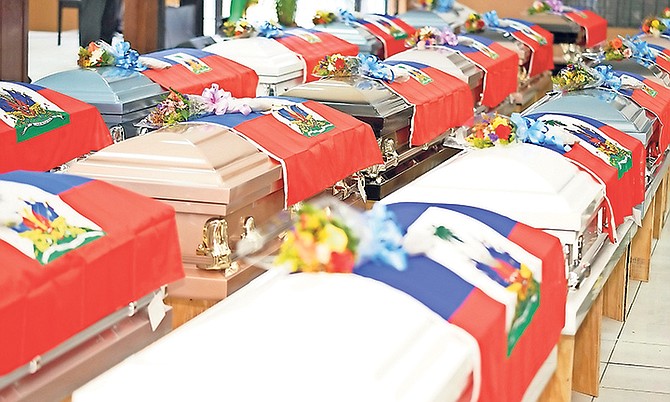 Coffins lined up in the Enoch Beckford Auditorium.

TRAGEDY struck as a vessel carrying more than 80 Haitian immigrants attempting to illegally enter The Bahamas shipwrecked in waters off Abaco. With the death toll up to 31 and only 18 of the migrants on this journey reported rescued, the number of fatalities seems certain to increase as search and rescue efforts continue for another 34 passengers still missing.

With these journeys not slowing, one must ponder if it is at all worth it? Also, we must consider if the method our government is using to curtail illegal migration is tough enough to deter such dangerous attempts.

Certainly, if we consider the state of Haiti and the model being used to build a better country by those in the diaspora, then the answer to the first question would be the affirmative. A study by the International Organisation For Migration concluded that of the two million migrants in the diaspora, remittances of $2.4bn were sent back to Haiti in 2016.

In the context of The Bahamas, we can make rough estimates that, on average, about $120m is being removed from circulation in The Bahamian economy to essentially buoy a failed state.

As some of us awkwardly try to walk the fine line between nationalism and humanism, it is indeed a difficult realisation that we do not have the size, capacity, resources or economic strength to be a lifeline to Haiti’s economy. What’s worse is we are seeing the Haitian government begin to rely on these money transfers as a form of development.

A businessman and former candidate in Haiti’s presidential election, Michael Nestor, has even gone so far as to suggest they introduce a law that promotes the use of funds from the diaspora to invest in Haiti.

“It is our opinion that the diaspora can contribute significantly to Haiti’s development beyond the sending of remittances or the construction of housing for their enjoyment. We propose a law that promotes the diaspora’s investment in infrastructure projects that Haiti so badly needs. Joint ventures or private capital could advance aqueducts, electrical systems, and roads to improve the quality of public services,” he said.

With the $2.4bn in remittances pouring in, it is perhaps not a bad idea – especially when that totals accounts for a quarter of their GDP and is the country’s main source of revenue.

As ambitious as it may be, it is simply something we, as a country, cannot sustain or be party to. We have enough of our own problems.

Conversely, the United States is home to the largest Haitian diaspora, totalling 700,000 migrants. In its current position as world superpower and a GDP of $20 trillion, compared with a developing nation with a GDP of $12bn, it is safe to say they can afford it and we cannot.

Other developed nations, like Canada, have also incorporated immigration into their economic model as a beneficial means of growth. Currently, Canada intends to extend invitations to a million immigrants who fit the requisite criteria to work in Canada and eventually become permanent residents – all part of a well thought-out policy.

The Bahamas, on the other hand, is running around like a chicken with its head cut off, trying to fight a losing battle against illegal migration with laws that are failing as deterrents.

Meanwhile, successive Haitian governments are not doing much to help to help their situation either. Although the Moise government is a far cry away from the Duvalier administrations, Haiti still sits among the top of the list of the most corrupt nations in the world. And despite what are purported to be positive discussions between Prime Minister Minnis and President Moise, we still see migrants attempting to illegally enter the country in droves every year.

Further, while there are many among us who may wish that the tragedies continue if more migrants come, it does not fix the situation. Firstly, as human beings, it is terrible to see people die, especially given the obvious desperation that drives them to attempt such a method of escape.

Secondly, we still end up deploying resources by way of search and rescue and medical aid which is an additional drain on the system.

In 2016, the International Organisation For Migration estimated 7,495 migrants died or were reported to be missing across five continents. In the Caribbean, there were 72 migrants reported either dead or missing in that same year– most, if not all, were likely to be Haitian.

This is a problem that will not be solved by xenophobia, but rather cooperation. It make take many nations and organisations to come together to figure out the best way to lend aid to Haiti without sacrificing any particular country. And of course, each model will have to be adapted based on what each country can sustain.

For The Bahamas, we can see that what is happening is not currently working.

In 2017, Prime Minister Minnis boldly challenged his government to humanely tackle illegal migration. It is still a question of how sustainable any of the policies implemented thus far will be. Surely, the number of sloops already intercepted for the year show many migrants are still willing to attempt the journey and seek what they view to be a better life in The Bahamas.

It is our hope the Royal Bahamas Defence Force continues to act on its intelligence and intercept these vessels as they come in. But now, what the populace is demanding is the aggressive search, apprehension and prosecution of those coordinating the human trafficking.

They are perhaps the biggest criminals.

We ardently hope the ministries of national security, immigration and foreign affairs look at this issue with great focus. Likewise, the Bahamian people must know that success, in this regard, will not take place today. However, we hope this administration continues to make steps forward and understand that the electorate can be patient, but will not accept inaction.

It is time for the gloves to come off.

The question should be, how the hell a boat made it from Haiti all the way up to Abaco without ANYBODY seeing it !!! Yes I realIze that things are really bad in Haiti but who is gonna take us in when they destroy our economy and why are Haitians being given free medical care and education. Everybody knows that Haitians are loaded with American dollars so why doesn't the governments make them pay for what they get here at OUR EXPENSE ???

The question really is how did the thousands that are illegally living here get here undetected. This is just ONE boatload that was about to land UNDETECTED had it not hit a coral reef and sank. Let that sink in for a moment.

But our Dimwitted Minnis, like SLOP, Ingraham and Christie before him, see them all as potential loyal supporters of the political party in office that eventually grants them citizenship by hook or crook. No sooner did Bahamians get majority rule than they now find themselves quickly becoming the minority thanks to the Haitian invasion sponsored and blessed by our successive governments that are controlled by corrupt politicians willing to do whatever it takes to get a vote in their favour. LMAO

REPEATED....MASS...ILLEGAL ...MASS.....VOLUMES....FORREIGNERS.....BREAKING INTO OUR SOVEREIGN COMMONWEALTH OF THE BAHAMAS....BORDERS....illegally breeching sovereign territory....wid using ensuing foreign flags....flags......REPEATED......REPEATED.....REPEATED......MASS....CRIMINAL....INVERSIONS...ILLEGALLY................AN.....AN...AN......DIE IN OUR BORDERS....WITHIN BAHAMAS ...TERRITORY.....DEMISE AT THEIR OWN .....HANDS.......AN .....VERY DISCONSERTING.........UNSETTING....AN...AN....DRAPING DERE HAITIAN FLAGS......BURYING IN OUR INVADING BAHAMAS TERRITORY..........MUDDOES....,!!!!.....Bahamas Diplomatic Corp should vigorously...loudly...condemn...looking at all these Haitian political flags.... this action of mass illegal breeching of Bahamas borders, territory and regretably Haiti's their own Haitians citizens action demised and amplyfying and impositing illegal invasion of Bahamas ...asserting .......displaying approval....by HAITI'S LAWFUL GOVERNMENT REPRESENTATIVES... Haitian political flags action over their citizens wrongful action AGAINST in Commonwealth of the Bahamas.

Screw humanely they have been coming over here repeatedly for decades - we need boats on the boarder to turn them or sink them before they enter our waters. This is more like a really long drawn out act of war.

"In the context of The Bahamas, we can make rough estimates that, on average, about $120m is being removed from circulation in The Bahamian economy to essentially buoy a failed state." Take this huge amount of wages leaving this Country for Haiti, on top of huge amounts being spent in Miami and beyond for tings, combined with the gambling houses and governmental corruption at every level, and you have a pretty clear picture why the Bahamian economy continues its free-fall dive.

How sad that these souls received more dignity and polished homes in death than in life........