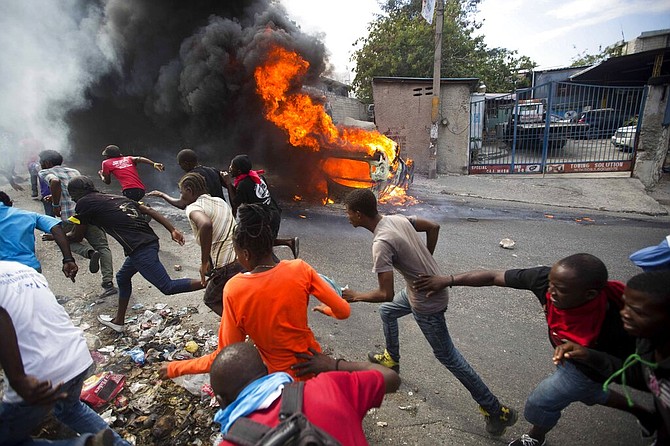 Demonstrators run away from police who are shooting in their direction, as a car burns during a protest demanding the resignation of Haitian President Jovenel Moise in Port-au-Prince, Haiti, last week. (AP)

ONGOING unrest in Haiti has prompted the closure of The Bahamas embassy in Port-au-Prince and the temporary suspension of deportations to that country, the government has announced.

In separate statements circulated over the weekend, both the Ministry of Foreign Affairs and the Office of the Prime Minister (OPM) pointed to the increase in violent protests across the capital city of Port-au-Prince as a major factor in their decisions to suspend diplomatic services indefinitely.

To that end, the Ministry of Foreign Affairs has recalled all diplomatic personnel for consultations on the situation as it looks to determine how and when to reconvene services.

Its statement read, in part: “The Ministry of Foreign Affairs will continue to monitor the situation and will reopen the Embassy once the situation stabilises.”

It further added: “No consular services will be available in Haiti until the Embassy reopens.”

The Ministry of Foreign Affairs advised anyone trying to contact the Embassy in cases of emergency do so by contacting the ministry directly on its out-of-hours number at +1-242-827-3106.

In accordance with this action, the OPM subsequently announced the temporary suspension of all deportations to Haiti.

In a statement of its own, the OPM noted that in anticipation of a potential increase of illegal migration from Haiti, Bahamian security forces have also been placed on high alert.

“As a protective measure, the Government is also preparing a temporary detention centre in Mathew Town, Inagua, which will be staffed with personnel from relevant ministries and government agencies, as to deal with any resultant eventualities,” the OPM’s statement read.

Meanwhile the Royal Bahamas Defence Force (RBDF) yesterday announced the apprehension of a Haitian sloop west of Compass Cay in Exuma, with 64 migrants onboard.

The undocumented migrants will be transported to Nassau where they will be handed over to Police and Immigration officials for further processing, and brings total apprehensions of Haitian nationals to 207 for the year.

This number excludes the 31 bodies recovered and 34 still missing from the waters off Abaco after a 40-foot conventional yacht struck a reef and sank on February 2.

The apprehension in the central Exuma chain occurred around 12:45pm yesterday, according to an RBDF statement, which flagged the coordinated effort between the RBDF, OPBAT and the US Coast Guard with the assistance of concerned citizens.

This round of violence comes after months of anti-corruption demonstrations in Haiti over the disappearance of almost $4bn.

The funds, set aside through the controversial Petrocaribe deal between Haiti and Venezuela over the last two plus decades, was earmarked for social development before going missing.

The protest is being championed under the slogan “Kot kob Petrocaribe a?” or “Where is the Petrocaribe money?”.

The protest has virtually shutdown several business and administrative districts in Port-au-Prince; including the neighbourhood President Jovenel Moise calls home.

Earlier this month, protesters stoned President Moise’s home, resulting in a clash with police that left at least one demonstrator dead.

The picture above is coming to your street in Nassau in the not too distant future. LMAO

Thousands will come what are the plans to house them and fed them or will they be released as the FNM papa did after the earthquake?

It is over now the Bahamas and the Bahamian are in trouble. Its the peoples time" says roc wit doc.

The love affair between our corrupt politicians and illegal Haitian aliens started with SLOP and the PLP. But Edison Key took the love affair to new heights in Abaco. LMAO

After the riots, then what? Haiti becomes even more uninhabitable, then a new excuse surfaces that it's too inhumane to send them back. They're provided with amnesty for a few years...and within that time four times as many "entitled" Haitian/Bahamians are born. The government has to stop making emotional decisions that impact poor Bahamians the most.

The people who are sure to come during this chaotic time would have faced more violence en route to the sloop, than from the international airport. Better yet, transport them by sea back to the Haitian beaches they travelled from.