Belinda: Meet My Demands - Or Else 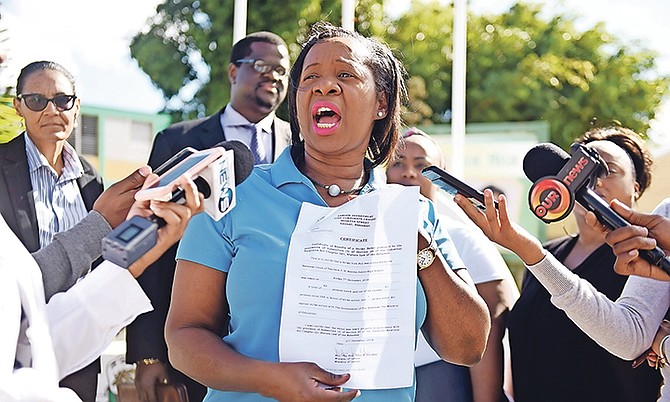 A TEACHER strike at C H Reeves Junior High School could spoil the start of the new school term after the Bahamas Union of Teachers received a strike certificate on Monday.

BUT president Belinda Wilson said only if her demands are satisfied, including an independent assessment that mould has been eliminated from classrooms, would a strike be averted. She assembled the press to tour the school yesterday, claiming Education Minister Jeff Lloyd would tour the campus with her. However, Mr Lloyd never appeared. Instead, school officials called the police and the press was told to leave the premises.

She said: “No teachers are going in the classrooms at C H Reeves on Monday unless and until the Ministry of Education can provide for one, an independent report that the mould has been tested, two, that the termite infestation in an area has been eradicated and three, that the teachers and the students will occupy the new 12 classroom block in back of the school.”

She also demanded written proof that mould in classrooms has been remediated by a professional company, not a “man off the street.”

The Department of Labour initially declined to give BUT a strike certificate because not all teachers in the country had the chance to vote in a strike poll. C H Reeves teachers were the only ones that participated.

Officials have not explained why they reversed their decision, but Mrs Wilson claimed Prime Minister Dr Hubert Minnis intervened in the matter after she spoke to him. Labour Director John Pinder suggested the strike certificate was issued without his recommendation when contacted yesterday. He referred The Tribune to Labour Minister Dion Foulkes who did not respond to questions up to press time last night.

More than anything else, the BUT said it will not accept an assessment of whether C H Reeves is fit for occupancy if the assessment is done by Anthony Ryan, a public analyst at the Department of Environmental Health. The assessment, the BUT said, must be conducted by an independent company.

Mrs Wilson said: “Initially Mr Ryan was the officer who came and was supposed to do an assessment of the mould on behalf of the Ministry of Education. He never tested the mould. Now today he is setting up a machine to test the mould in the 19 classrooms. He was supposed to do it initially, six to eight weeks ago. He did not do it. Now we are saying anything Mr Ryan presents to us as it pertains to C H Reeves we will not accept. We want an independent company to do the assessment.”

Mrs Wilson said the BUT did not tour the school campus yesterday as expected. She said the deputy director of education told them no photos or recordings could be taken, causing them to bail on the walkabout.

“It’s not his place to give us any instructions because it’s the BUT that took the Ministry of Education to labour (officials),” she said. “That’s one of the reasons why we left.”

As for the 12 new classrooms, Mrs Wilson insisted they must be ready for occupancy because the campus’ other buildings are too old.

“Teachers were teaching in those classrooms, but they’re not the best classrooms,” she said. “The place is old, it is dilapidated; teachers have been making it work. Those buildings, if they haven’t been condemned, they need to be condemned. The government was supposed to be getting an occupancy certificate for the new 12 classrooms in the back area of the campus. We thought today they would be able to assure us that the new block which has 12 classrooms would be available for use on Monday, but we have not received that assurance.”

Mrs Wilson said: “When we walk into this school, teachers and students on January 7, we want to walk into an environment that is conducive for education and teaching. We don’t want any foolishness, any lies, any misinformation, from the Ministry of Education, from the person coming from the Ministry of Environment and we want commitments that whatever is not done today will be done in time for the opening of school on Monday. If it is not done we will invoke our right to strike at C H Reeves.”

I say close all but one of the public schools and only let the few students, who put in any effort, enroll. For the vast majority of our youth, school is just a day care center and a place to try get a piece of nooky!

Ignorance is a bliss.

Hypothetical question: What would happen if we demanded the closing of every building in the Bahamas that had mildew or a termite infestation?

....NUMBERS OF PERSONS...likely....related to ....connected....persons ..would get big contracts to do the cleaning job.....whichinin likely to be inflated further....and recommended ....an likely to be further increased in costs...2x...3x....whichin somebody likely accusing somebody else of getting a bribe...finders fee...plus new contractor likely to be brought in ......repeating the process all over again.....

We would have no government services!!

..........meanwhile, many students are still under performing and lack the basic skills needed to succeed in the real world..........sighs!

The Prime Minister, if he gave permission for the strike vote was wrong to go against his labour ministry. This woman can not be trusted, now she feels empowered to make all of these unnecessary demands.

I am sure everyone agrees that the teachers deserve better conditions, but what government building is not dilapidated and moldy? Who is she to challenge a certified analyst who has already indicated that the mold is minimal to none after the cleaning? It's sickening the way they waste so much time while these children continue to fail.

Unions in the Bahamas are ridiculous, unreasonable and a waste of time!

Forget education. As SLOP once said: "The mind of a dumb voter is always a more easily persuadable mind." LMAO

You need to sit down with Loftus Roker (Minister of Immigration under SLOP) and carefully listen to his explanation for why all of the very highly qualified expat teachers in our country had their work permits pulled almost over night so that they could be replaced by unqualified Bahamians teachers. From that point on our country's education system has consistently failed most Bahamian students and the quality of our politicians has gone down hill. Dumb voters are just not good at filling parliament with the best and brightest leaders our country has to offer. I strongly suspect you may be one of the victims of our country's most unsatisfactory education system. ROWL

One of the problems was too many of them were getting pregnant by students. Another problem was some of them (male teachers) were impregnating students then leaving the children fatherless when their contract expired.

Ya Lie.Stop making stuff up.SLOP never said any such thing.

A barking pitbull demands red meat. The PLP learned this 2 years into its term. Put 2 contracts in her cousin's name and she'll tone down.

WHAT NEEDS TO HAPPEN....OR SHOULD IS TO SPEND SOME MONEY TO HAVE A THOROUGH ANALYSIS.....A LOT OF DESE OLD STRUCTURES ARE LIKE PAST DERE TIMESPAN....materials deteriorate....years ago probably empty area....now commercial....wind....chemicals...pollutants....Cleaning the mold might remove most....but deteriarating...roof material impregnated...with contaminants...plus conditions ....will likely repeat the wholt situation....again...an again.....BEST ting might be to spend the money and build a new school...stead of wasting money wid band aid temporary solutions....only person happy is the Contractor.an employees..laughing ....but nevertheless saying ...dis gon be the last time...an then make spme excuse to fix it again..an again.....

This woman already knows that these students are as dumb as stumps but is pushing for a strike to make matters worse. Not everybody can afford a private education like the education she got at St. John's Collage. She is now basking in her glory and self importance, just another loud mouth power hungry clown !!!

Mrs.Wilson will go quiet when Dr.Minnis gives her the position he promise to appoint her to.Education in the Bahamas is in need of a complete overhaul.

What will Lloyd, Foulkes, and Minnis do when this single-school strike vote crap blow up in their faces????????

Correction:- it won't blow up in their faces, it will blow up in our faces and we will be left to pick up the pieces because this woman is cut from the same cloth as power hungry Fred Mitchell !

DIdnt the Minister .???.not too long ago commit to new progran to give out $2,000 vouchers to some 500 pre primary school chillren ....some 1 to 1.3 million dollars...helps pre primary age students...around 3 years mostly to private schools.???.......AND on other hand some 150 schools with some 50,000..done in schools ....needing some physical repairs to operate....????....then with the days old influx of illegal migrants an chillren....who escape or had help escaping..or...soon to have anchor babies to attend free school......!!!! ....seems erry body losing out whichinever way yinna looks at it....except for people making policy on top of policy...

Ever wonder what she would look like in a Robin suit with the face mask and all - from Batman & Robin? I've pondered the question thoughtfully.