JOB gains highlighted in the most recent Labour Force Survey among young Bahamians and in the tourism sector, were yesterday lauded by two senior Cabinet members.

In separate interviews with reporters outside of Cabinet yesterday morning, both Tourism Minister Dionisio D’Aguilar and Labour Minister Dion Foulkes assert that statistics prove the Free National Movement’s job creation strategy has been effective, despite the unemployment rate increasing from 10 percent to 10.7 percent as of November 2018.

Unemployment in New Providence also climbed from 10.1 percent to 11 percent. However the statistics also show 2,300 jobs were added to the labour force since the previous survey. 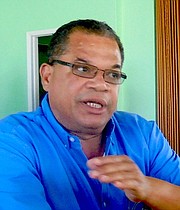 Directly endorsing the claims made by Minister of Finance Peter Turnquest earlier this week – who said 10,400 net jobs have been added to the economy as of November 2018 since the Minnis administration took office in 2017 – Mr Foulkes insisted the economy was “on the right track”.

Referring to unemployment decreases in Abaco and Grand Bahama, he said the government has done all it can to steadily improve things.

Mr Foulkes added: “One of the things we are focusing on as a government was the increased employment of young people. This survey - although its only one percentage point - there is an uptick of employment for young people between the ages of 15 to 25 that was revealed in this survey so we are extremely pleased about that.”

Moreover, he also noted the statistical changes in the category of discouraged workers – which fell by 6.7 percent – conceding that numbers in this area could at times, be viewed as “artificial”.

“When there is a significant decrease of discouraged workers, the unemployment rate can be skewed because of that.

“Let me give you another example, if we have 3,000 school leavers that come out of the school system this year, next year we have 5,000 that come out, when you compare the two surveys it will be skewed and it’s the same thing with discouraged workers.”

Nonetheless, Mr Foulkes said the government was pleased by the fact that in New Providence there was a decrease by 9.1 percent in the discouraged workers, a “very significant” change he said, needed to be noted.

He added: “We are very pleased. One of the reasons why we think there was a decrease in discouraged workers is the various loan programmes that we did with the (Inter-American Development Bank) for young people and also the Labour on the Blocks initiatives that we did last year… because at the end of the day our main focus as a government is to provide the best livelihood possible for every Bahamian citizen there are jobs out there and I encourage Bahamians to go and seek them.”

For his part, Mr D’Aguilar argued that since coming to office, the Minnis administration has successfully created more than 10,000 jobs - most of which were created in the private sector.

“We are correcting this economy,” he said. “The failed strategies of trying to create employment by giving government jobs, which led to greater government debt and led to further downgrade, downgrade after downgrade, has been halted and we are now doing it the right way of allowing the private sector to grow and to flourish and to create the jobs.”

The Freetown MP said while the rate of growth is not occurring as quickly as needed, referring to the annual work-force increasing which occurs in June with students leaving high school, he is also encouraged by the reduction in discouraged workers seen in the recent survey.

“There were a lot of encouraging statistics that came out of that survey and we are encouraged that the economy is growing jobs the right way, which is the private sector is driving it. And that is the way to bring about a rebound and to add some vibrancy to your economy. So I was very encouraged by that,” he added.

Yes or no ma comrade Dionisio James - the phrase "numbers don't lie" all depends upon source the numbers you're applying to show the truth of your jobs strategy is working conclusions. Yes, no?

Every one knows that nearly one out of five Bahamians who want to work cannot find a job that pays them a wage sufficient enough to keep them at or above the poverty level. D'Aguilar, Turnquest and Foulkes are having a useless debate over misleading statistics that are for all intents and purposes meaningless because they fail to capture the reality of the situation. All three of them would much better spend their time focusing on the development of investor and business friendly policies that stand a chance of creating new and better paying jobs. Blowing hot air accomplishes nothing.

Why do anything any how. . . you don't seem to understand nothing anyhow. . .so why do anything different than they are doing now. . .YOU WILL NOT UNDERSTAND THE DIFFERENT NOHOW. . .ALL THE ECONOMIC INDICATORS IN THIS NATION SUGGESTS FORWARD MOVEMENTS IN GROWTH. . .with you remaining in "pissville". . .like the leader of the DNA. . .old politics gat yinna anchored down in "diehardville". . . like PGC said: "total nonsense". . .Lol!

Minimum wage in that country must be at the minimum $12.50/hr for the Main Island and $10.00/hr for the other Islands in order to give the folks a fighting chance.

Aint no way in hell unemployment is down in GB.....

Blah, blah, blah, blah. These two "talking heads ministers" need to try selling their nonsense to tens of thousands of unemployed and underemployed, hungry, broke, Bahamians sitting in darkness with no hope!

My "business indicator" is my bank account balance and it "indicates" that unemployment is at an all-time high with no end in sight.

Get rid of the blue collar expats and put our people back to work.

There are lies, damned lies and then there are statistics-- Mark Twain

Maybe, Just Maybe the 2300 jobs added came about after legalizing SHANTY TOWN illegal immigrants and adding their employment to the Labour Force Survey. The survey need to state the Industries that these jobs are in, and how many were filled with Work permits and how may are True Bahamians. Sound like the laying of the foundation for and further increase in V.A.T and or Personal Income Taxes in preparation for membership into the WTO.

I remember Brave and Shane Gibson was piss too when it was discovered by the Dept of Stats that the government of the day didn't pride 10,000 jobs as was predicted. The Statistics refuted their claim. The numbers never lie. I find it really hard to believe too here in GB, I see no changes. But maybe most have move away from this island., The few that is left may have find something in Nassau like my daughter.