Stateside: Supreme Court Plays Both Sides Of The Table 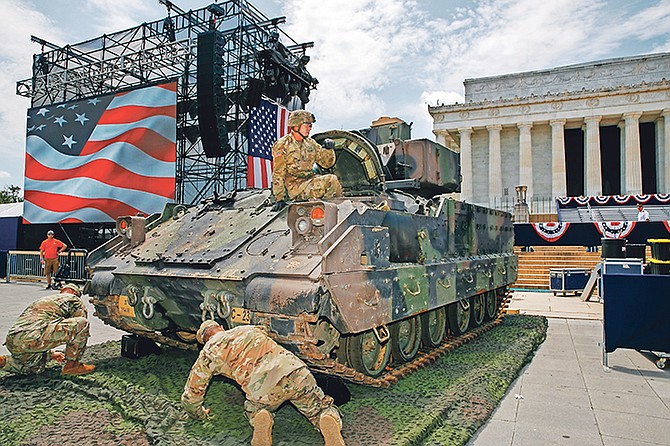 An Army soldier hops out of a Bradley Fighting Vehicle after moving it into place by the Lincoln Memorial yesterday in Washington, ahead of planned Fourth of July festivities with President Donald Trump.

With all the furore over the first Democratic candidates debates and President Trump determined to interject himself into today’s Washington DC Fourth of July extravaganza, the American Supreme Court has been mostly pushed off the front pages.

But the end of this year’s court term last week revealed unpredictable decisions from the nation’s highest tribunal that will have repercussions in the near and long term.

First, the court clearly rejected a Trump administration argument that adding a citizenship question to the 2020 American census was not motivated by the political desire to depress immigrant, largely Latino voter count. At one point or another, the Departments of Justice, Treasury and Commerce had gotten involved in this transparent charade and the court deserves credit for unmasking and rejecting it.

But in a separate decision, the court also rejected the notion the courts have standing to intervene to redress the imbalance created when partisan state legislatures gerrymander congressional districts to the advantage of the party in control of a state legislature.

This decision overturned several lower court decisions which had given hope to voter rights advocates, liberals, moderates and even some libertarians across the country. It means that distorted districts created by state house politicians will persist, at least in the short run and that black voters particularly will still be grouped in one district in order to dilute their electoral impact in others.

The gerrymandering decision, which gives a distinct advantage to Republicans in all relevant states except Maryland, was taken along familiar ideological lines, and included Chief Justice John Roberts voting with the conservatives.

Roberts had voted with the liberal justices to tip the balance on the census question. This extends a tendency for the court’s leader to try to avoid the impression his court has become just another political tool for a Republican president and politicians.

In 2012, for example, Roberts also sided with liberals on the court when he voted with them to preserve the Affordable Care Act (“Obamacare”) from legal challenges by conservatives and Republicans. But in 2010, he weighed in on the side of corporate and other large political donors, and notably GOP majority leader Mitch McConnell, in the Citizens United case.

Roberts has made it plain that he resists the politicization of his court. But he is a conservative, and when he isn’t concerned about appearances and impartiality, he can probably be counted on to vote that way. 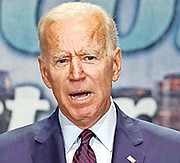 And so the dirty tricks begin

The New York Times is now reporting evidence that suggests we ain’t seen nothin’ yet in the department of 2020 election political dirty tricks. They are reporting that:

Trump operatives have already created a website superficially resembling Joe Biden’s official campaign website. They have filled the mock website with all sorts of material making fun of Biden, pictured right, and criticising him.

Most ominously, several anonymous accounts have been set up questioning the American-ness of California Senator Kamala Harris, who post-debate polls show gained the most support from the debates. Harris, an American citizen born in Oakland, California, is the daughter of a Jamaican father and Stanford University economics professor and an Indian mother who is a physician. 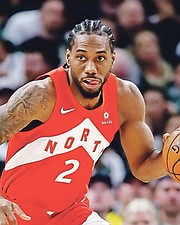 Stick or twist - where will Leonard end up?

With one big exception, the long-awaited 2019 NBA summer free agency period is finished. That exception is this year’s NBA Finals MVP, Kawai Leonard. The Toronto Raptors forward has reportedly spoken with both the Los Angeles Clippers and Lakers, in addition to the champion Raptors. He may reveal his decision today.

If Leonard stays in Toronto, the champs will look strong enough to defend their title next season. If he goes to the Lakers, he will join LeBron James and Anthony Davis to form perhaps the most formidable Big Three in modern NBA history. Choosing the Clippers would turn that young team into a Western Conference title threat.

Most of the other teams have largely wrapped up their free agent activity. Altogether, NBA teams committed $3 billion to players over the length of their new contracts. Here are the most significant developments from this week’s free agency so far:

Philadelphia 76ers: They surprised most observers and stole valuable, versatile veteran Al Horford from the Celtics after he opted out of his contract and became a free agent. They are also expected to sign star Ben Simmons to a mammoth new deal, and re-signed Tobias Harris.

Boston Celtics: Their big move was to sign free agent Kemba Walker, who returns from Charlotte to New England where he won an NCAA championship with UConn in 2011.

Brooklyn Nets: Their moves had the New York headline writers hustling. They persuaded Kevin Durant to commit to them, in addition to Kyrie Irving. Durant had led the Warriors to a couple of NBA titles, and Irving had teamed with James to win one in Cleveland. Adding two such mega stars to a rising young team made everyone sit up and take notice.

Milwaukee Bucks: They re-signed two of their key players to return to a team that won 60 games and posted the best record in the NBA in 2018-19. Khris Middleton and Brook Lopez are returning, and the Bucks will be strong again.

Miami Heat: They added Jimmy Butler from the 76ers in a four- team trade transaction that could well propel them back into the playoffs next season.

Portland Trail Blazers. They were proactive in signing their star guard Damian Lillard to a big new four-year contract extension even though he has two years left on his current deal.

Golden State Warriors. They re-signed Klay Thompson to a new max contract to keep the Splash Brothers (Thompson and Steph Curry) together for several more years. They also traded for D’Angelo Russell from the Nets.

The Kings, Pelicans, Jazz and Knicks were all very active in the market, but their signings or trades seemed less momentous.

Once Leonard decides where he will play, the league can let out its breath and wait for the start of training camp in a couple of months.