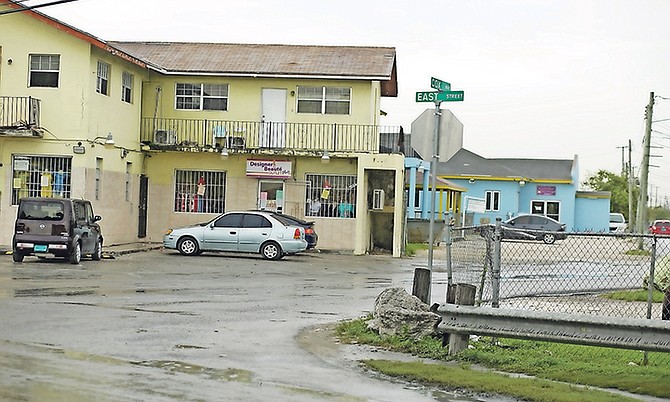 The scene of the fatal stabbing. Photo: Donavan McIntosh 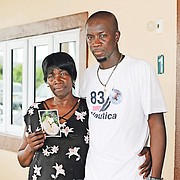 Curtis Murphy Jr, pictured with his mother, told The Tribune the family is shocked about the death of his brother Nicartha Murphy, who was fatally stabbed on July 10. Photo: Donavan McIntosh

AS Curtis Murphy Jr held his stabbed and bloodied younger brother Nicartha in his arms at the parking lot of Smith’s Motel on Tuesday night, he clung to hope the 32-year-old father would live to see another day.

However, hope would not be enough to save Murphy’s life. He died of injuries inflicted during an altercation with a “close friend”.

The grief, said Mr Murphy Jr, is overwhelming and painfully too familiar.He told The Tribune yesterday his closely-knit family was still grieving after the murder of Nicartha’s twin brother Elcartha, who was shot and killed on the night of December 21, 2018 on Malcolm Road.

Now just seven seven months later the family’s emotional wounds have been ripped open again and  they must now plan for another funeral.

Police said yesterday they are investigating Nicartha’s death as a homicide. It happened shortly after 9pm on Independence Day.

“According to reports, two men were in the parking lot of a business establishment on East Street South and Cox Way when they got into an altercation, which escalated, resulting in them stabbing each other about the body,” police said.

“Both men were transported to hospital, where one of them was later pronounced dead.”

A second man is detained in a serious but stable condition, police said.

Mr Murphy Jr, speaking to The Tribune outside the family’s home at Ashburn Terrace off East Street South, said he was near the scene of the altercation when he got the call about his brother.

“I had his son in my hand and all I did was pull right to the next building and I met him on the floor so I just ran to him and held him up,” said Mr Murphy Jr s he was surrounded by emotional relatives.

“The police were saying they waiting for the ambulance to come so I waited.

“We are not over the first death as yet so to have received this one last night was an extreme blow.”

Asked whether he knew what sparked the altercation, Mr Murphy Jr said everyone was questioning how two friends could have ended up into such a deadly confrontation with each other.

“They hung there every day, they were friends,” he said.

“Every day they be together. So we are questioning what happened and why.”

Nicartha’s close friend Pizzario Brennen said he has serious concerns over whether the time it took for an ambulance to arrive was a contributory factor in the death.

“I was there when the whole thing happened.” he said.

“I want to know why the ambulance took so long. It took them at least 10 minutes or more to get there.

“I think if they came sooner, my breddren (sic) would be alive.

“They even took forever to get to the hospital. We had to come through here to drop off his fiancé and his jewellery and we got to the hospital before the ambulance got there.”

Mr Brennen also claimed the ambulance’s siren had not been turned on.

After losing two brothers to senseless violence, Mr Murphy Jr said relatives are finding strength in each other.

He said with God’s help they hope to move past the hurt and pain brought on by the death of a man they described as humble and loving.

Even in London where they are a minority, young bBlack men are being slaughtered, allegedly at the hands of each other. Many are being stabbed to death, some as young as 16. And the ones who do the killings in London, are mostly teens or persons in their early 20’s.

Some of us, who are able and were willing, did reach out to help... but we were rejected. Hence, you have to go with your choice; and scenarios like this, is the result.

so true @Godson. We have to live with the consequences of our choices.

Heartfelt prayers to you and your family, but " a humble man carrying a knife for protection?"

"also hanging out with another humble man with a knife."

These guys don't live my life of your life. "One" of them was defending himself. Pray to God that you never have to understand why they need to walk around with protection. Pray that the day will come when they don't feel they need to

Therein lies the problem, carrying dangerous weapons on your person,be they knives or guns.In the old days when friends had an argument, I little pushing or 'dashing' and other friends intervening, in fives minutes everything was back to normal.

So, so sad, another waste of precious life. Before the words, FRIEND or FRIENDS is uttered out of a person's mouth they should maybe look up the meaning and there are numerous dictionaries with meanings, I have yet to read one which states that FRIENDS TURN ON EACH OTHER AND CAUSES HARM TO EACH OTHER.

So sad. However... they sounded more like businesses partners; a colleague maybe? Hanging out with someone every day don't necessarily mean that your friends.