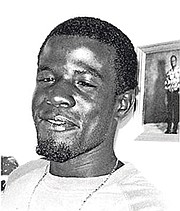 A WOMAN officer testified yesterday about the moment she saw a knife wielding man charge at her partner before he was fatally shot in Pinewood Gardens nearly ten years ago.

Police Constable Jovan Jervis killed Lanes Sylvius on August 23, 2010 and the inquest into that incident began this week. Corporal Angela Johnson testified that she and Officer Jervis were on duty that morning when two bus drivers came to complain that they were victims of an armed robbery on Bay Geranium Avenue. Dressed in their police uniform, she said she and Officer Jervis visited the scene and found the suspect wearing black shorts and a white shirt. Officer Jervis, she said, jumped out of the police vehicle and although he shouted warnings to the suspect, the man ran, prompting the officers to give chase.

“Until we start introducing mace, Tasers, rubber bullets, etc, I really believe some of the challenges officers face may turn out differently should we be given these other resources which we don’t have,” he said. “We need to be better stewards of what the Bahamian people are entrusting us with, which is protecting them as authorities.”

Officer Delancey is attached to the police armory. He taught Officer Jervis about firearm use and safety at the police academy. He said though he is one of a few people certified to use non-lethal weapons, such objects were “never applied widely.”

Those objects, he said, “might break a rib, but you live.”

“If I shoot you with a bean bag or rubber bullet compared to a metal projectile, the metal projectile is going to penetrate, the rubber bullet will take the wind out of you but you’ll end up in custody or prison but still alive, but we’re not given these stuff. Is it fair to put my son and your son in this environment without equipping them and training them with what they need? I will cry on this point until something is done. We owe it to the general public and the persons we send out there, protect the public and protect the public’s interest.”

He raised similar points while testifying in a separate inquest earlier this week.

Nonetheless, Officer Delancey said wielding a knife could lead to situations that would justifiably cause an officer to fear for their life.

“Every time you use this weapon, it has to be based on your perception about what it is you have encountered,” he said. “The police force can’t tell you who to shoot and when to shoot, that’s something based on your perception of the situation you are in. I want to be very clear, the question has come about ‘why didn’t you shoot the person on their leg or hand?’ I always want to make it clear that unless you could justify causing someone their dear life, do not use your weapon against them. We don’t shoot people because he slap you and run, we don’t shoot people because we don’t like him, we shoot people based on an action they would’ve taken that brings us to the point of having to use our weapon against them, whether to protect our lives or the lives of another individual. If (an officer) beckons to you and gives instructions and you fail to carry out those instructions and that warrants him using a weapon, he’s not using it to shoot you in your toe or your hand, he is using it to kill you, to deprive you of your life, to take control of the situation, though it has to be warranted and it has to be the last resort.”