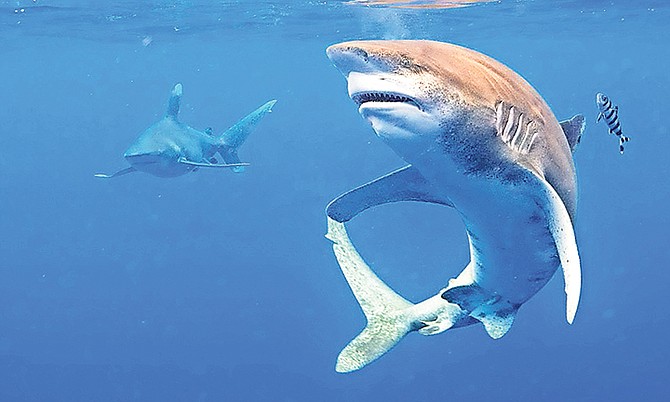 The oceanic whitecap is now listed on the Endangered Species Act.

Dr Bond said: "So that now doubles the areas that we know sawfish are giving birth. The only previous nursery ground was the Florida Everglades. I'm a part of a collaboration along with Florida State University and the National Marine Fisheries Institute of the US looking at the critically endangered small-tooth sawfish and that work takes place on the west side of Andros and the west side of the national park.

"We have had some great discoveries there," Dr Bond continued, "we were tracking with the acoustic tags movement between islands of The Bahamas."

Dr Bond encouraged Bahamians to "not overreact" to incidents of shark attacks and encouraged the government to "alleviate any fears" because such incidents are rare.

He said: "(Bahamians) can make sure that the government does not overreact to the incident of a shark attack, that unfortunately happened recently. Just a sheer number of people that are in the water and the fact that you have a healthy shark population means that interactions are going to occur.

"Bahamians need to make sure that they don't let the government open up waters to international fisheries that would reverse the shark sanctuary or reintroduce longline. So, it should be something The Bahamas is very proud of because they are a global leader in shark conservation."

He added: "I've been very fortunate to be conducting research in The Bahamas since 2007. I'm originally apart of the Bimini Biological Field Station and I have now collaborated with Cape Eleuthera Institute and also Saving the Blue Foundation in Andros."

Dr Bond underscored the critical importance of shark research due to a massive decline in the population of multiple species throughout all oceans.

He said: "(Sharks are) taken heavily into commercial fisheries both as intended catch and bycatch. Their life history means that they're slow to grow, they're late to reproduce and when they do reproduce they have few young. It is very pivotal that The Bahamas acts as a life boat.

"One example being the oceanic whitecap (shark) that is now listed on the Endangered Species Act yet again form part of a collaboration that's been studying that species in the region for nine years based out of Cat Island. We're catching a lot of pregnant sharks we're tracking their movements throughout the Caribbean."

He added: "They do spend a larger portion of their time in The Bahamas but they are exposed to fishing pressure outside of The Bahamas, throughout Haiti, Cuba and around some of the eastern Caribbean so that's one of the populations where we've been studying them for long enough that we believe we can start answering some of those critical questions to hopefully have the population recover and do as well as it's doing in The Bahamas outside and the rest of the Atlantic Ocean."

Dr Bond said sharks will recover "very slowly" because the species has a life history similar to humans.

He said: "We would expect if you were able to put in effective management and effective conservation, we would expect to see recoveries in 10 to 15 years. It's definitely a work in progress and we're setting a very good foundation right now but it's important that The Bahamas continues to be a shark sanctuary and that future generations are aware of why it's not only important from an eco-tourism but also for a marine health standpoint."

"If you like conch and lobster then you should really be wanting to keep sharks in the ocean because removing a top predator will have a knock-on effect that will jeopardise those fisheries."

The law has truly made a "free-for-all" for shark. . .A STUPID AND VERY DUMB LAW IN THE FIRST INSTANCE!! Abaseli elephant control program is a good example of preserving nature and allowing man and beast living together!!

The better idea is to limit the amount of man