Bnt: We Need Our Own Fines Over Waste Dumping 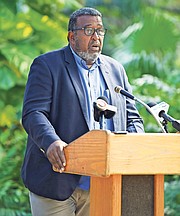 THE Bahamas National Trust said yesterday the county needs the ability to enforce its own fines where it is discovered that cruise lines dump waste in Bahamian waters, adding this kind of penalty would provide recourse where fines are paid out in the United States.

In the aftermath of Carnival Corporation’s $20m settlement over violating terms of its probation, the BNT further questioned whether recent findings of environmental infractions in the Bahamas by the cruise line were just the tip of the iceberg.

Additionally, the repeated fines are an indictment on the corporation’s actions, the BNT said, but seem not to be a sufficient deterrent.

The company admitted to six violations of its Environmental Compliance Plan (ECP), one of which involves having its ship, Carnival Elation, discharge plastic mixed with food waste in Bahamian waters on December 16, 2018 in violation of the International Convention for the Prevention of Pollution from Ships (MARPOL).

Other violations include falsifying records, communicating with the US Coast Guard through a back channel, failing to give enough authority to the company’s environmental compliance officer and rushing to clean up ships ahead of visits by a court-appointed monitor.

The Tribune published news of the $20m fine on Tuesday.

“As a sovereign nation, the Bahamas needs to be able to levy fines for dumping activity in our waters, as the result has a detrimental impact on our number one economy,” the BNT said in a statement expressing outrage yesterday. “It seems counterintuitive that none of these penalties are paid to the Bahamas government, despite the fact the infringements are taking place in Bahamian waters.

“An important reality that has emerged from this public legal case, is that as a nation, we have not invested in sufficient capacity to properly monitor this industry. This case and its associated findings, reveal that this industry has been dumping in our waters over an extended period of time.

“It is fairly obvious that if this the issue had not been regulated in the US and brought before the US courts, this flagrant abuse of our oceans would still be undetected. These fines are a serious indictment on their actions, but the real question is, what else is happening out there - could this actually be just the tip of the iceberg?

“As such it is imperative that while we are committed to legislative and policy reforms to address this issue, we also need to increase our national capacity to police and monitor our oceans. We cannot continue to depend on others to be the watchdog protecting our waters for us.

“Finally, we note with emphasis, that this second fine is a penalty for a violation of Carnival’s probation, having already been found guilty of serious environmental infractions. This leads us to wonder whether these penalties are in fact a sufficient deterrent.”

BNT Executive Director Eric Carey furthered that that negative actions from Carnival and other cruise lines undermine marine conservation efforts that have been made.

He said: “The Bahamas is recognised globally for its efforts to protect the marine environment. We have created one of the most impressive national park systems in our region, including the oldest land and sea park in the world, and further the Bahamian government has committed to protecting 20 percent of our nearshore marine environment by 2020. The actions of Carnival and possibly other cruise line, shipping corporations, and private vessels undermine the marine conservation efforts we have undertaken.

“The ocean is our number one asset sustaining so much of our very way of life. The Bahamas allows the cruise industry to use our oceans to support their business. We as a nation are working so hard to protect our marine environment, and we have every right to hold Carnival Cruise Lines accountable for protecting what is also a key asset to their own success.”

In noting comments on the issue by several Cabinet ministers, he said the BNT would now like to see a clear strategy that takes the Bahamas towards robust policies and appropriate legislation to address this issue.

He said the government would also seek compensation or recompense if it finds damage was done.

He said an accelerated investigative process is now underway in an effort to make decisions. However, over a month later, there has been no update regarding this.

Through the new settlement agreement, which contains the $20m fine, the company has agreed to allow additional audits and visits from its monitor and third party auditor.

US District Court Judge Patricia Seitz approved the agreement on Monday. At a previous hearing she threatened to block Carnival from docking in US docks. According to the Associated Press, she said this week: “The concern I have is that senior management has no skin in the game. My goal is to have the defendant change its behaviour.”

She reportedly said future violations might be met with prison time and criminal fines from individuals.