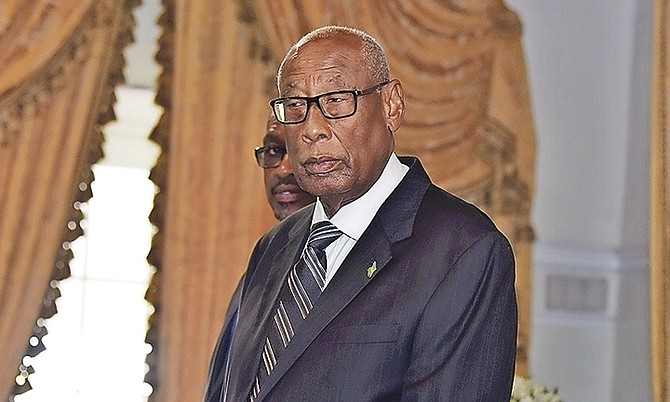 PRIME Minister Dr Hubert Minnis yesterday called the controversy surrounding his pick for Governor General, C A Smith, “unfortunate,” insisting the circumstances of his gaffe would be taken into consideration by Buckingham Palace.

Dr Minnis, in addressing the issue on the sidelines of a swearing-in ceremony for the nation’s new Chief Justice Brian Moree, QC, said it was unfortunate the country had arrived at a point where private conversations cannot be held without individuals feeling the need to record them for social media.

“It’s unfortunate we’ve reached that degree in our society,” he told reporters, adding: “But that’s a matter Buckingham (Palace) will view.”

Last month, Mr Smith was captured on video detailing the circumstances behind his decision to resign as the non-resident ambassador to seven South American countries.

“As a result of Her Majesty the Queen appointing me to be Governor General I found it necessary to have to resign in the position,” Mr Smith said in the video, recorded at a farewell luncheon at the Passport Office in Freeport. “I had to be transited to another position. The swearing-in will take place on the last Friday of June in Nassau.”

His comments came as a bit of surprise, as there were no formal indications of the government’s intent to replace the current Governor General Dame Marguerite Pindling.

Mr Smith was first sworn in as deputy to Dame Marguerite last year.

Mr Smith has since issued an apology for the mishap.

Shortly after the blunder, Official Opposition Leader Philip Davis called it a shocking breach of protocol. He urged Dr Minnis to abandon Mr Smith’s appointment, asserting his break in protocol set a bad precedent for someone ascending to high office.

Meanwhile, Dr Minnis yesterday also confirmed that he is awaiting “correspondence” from Queen Elizabeth on his recommendation to have Mr Smith replace Dame Marguerite in the coming weeks.

Commenting on the status of the ongoing process, the Killarney MP said: “(Dame Marguerite) would’ve gone over to visit Her Majesty, after which I would’ve sent forth a recommendation for a replacement but that is not completed until it’s confirmed by the Queen, after which they would send that correspondence back so the process was really in train right now.”

Dame Marguerite was appointed Governor General on July 8, 2014, by the last Christie administration.

Oh how sweet for your comrade have most trusted streetwise source.deep behind heavily policeman's guarded PMO doors who has it that word either made its way directly/indirectly CA, about the PM's rethinking procrastination C.A's appoint makes sense why 'someone' wanted outfox the PM - before it be's too late make move, hence, enter rush broke with royal protocol, yes, no.................... hell be's with political risks snatching away waiting Queen not never speaks name C.A............ Can't just be making this, that kinds thing up................

Why did the Tribune use that picture. Makes him look tired for the position. However, I wonder when we will rise up in this country and be free from the shackles of a position that only shows us still beholden to the colonists of Britain. And we say we independent? .

Agree with @sheeprunner though. Private conversations need to stay that way. The man has a right to tell whoever he wants to privately that he was appointed to be GG. Why this is such a fun for a ceremonial post that shackles us to a country that does not even respect us to place an embassy in our nation, is really beyond me.

Maybe you have forgotten the photo The Tribune uses of Minnis for several years prior to him becoming PM.

Dealing with the photo shown not something not present. Let's stay on point.

Smith's excitement at living free on the public dime AGAIN, got the best of him.

Maybe populaces beloved Her Excellency Marguerite's royalist, youthful vigor protocol conducted on behalf the comrade Queen's governing affairs Colony of Out Islands was made looks too damn easy, yes, no............

THE PRIME MINISTER........ AS LEADER OF THE COMMONWEALTH OF THE BAHAMAS HAS MADE HIS CHOICE FOR ALL THE NATION....The Opposition Leader has of all the major challenges of the nation smallest Opposition seats defending glaring financial blunders allegations of da mammouth financial breeches of his previous govt......instead chosen to raise the mountain out of issue of selected GG which should be discreet and blushed over for all.

The Tribune's staff reporter (Ricardo Wells) should be given the "Understatement of the Year Award".

'AC DC' Smith, as he is well known, is about as indiscreet and senile as they come. Just another shining example of Minnis's inability to exercise good judgement. AC DC should never have been considered a fit and proper candidate for the post of GG just as Christie should have never considered Poodling's wife to be a fit and proper person for the position. With each passing day there seems to be less and less of a difference between Minnis and Christie, much to the chagrin of those who believed Minnis's repetitious promises during the FNM's last general election campaign that this time it would be the Bahamian people's time. What a joke that has turned out to be!

Resignation needs no explanation. The add lib on flying everyone to Government house was in poor taste, particularly with the Partisan political component within the MOFA. I understand the posting is reward for loyalty to the P.M. during the coup. Not loyalty to the country but to the leader.

And we all now know that the leader has no loyalty to the people.

Minnis has unabashedly failed to deliver on his promise that it would be the people's time. Our cost of living has soared and our tax burden has greately increased under his failed social and economic policies. The man is directionless (never knows whether he's going east or west) and absolutely clueless as to what should be done to create a better Bahamas for all of us, and not just his close politicial friends and cronies. Minnis lends new meaning to visionless.

GG's gone all crazy haywire appointment could've gone lots more smoothly had only Imperialists PM, asks the Queen appoint Comrade "Sister" Janet B., yes, no.......noway hell "Sister" been wanting Queen's populaces subjects 12% VAT monies subsidized airline tickets fly-in planes loads freeloaders political loyalists come party atop Mount Fitzwilliam......... more so when "FREE"porters may not even be recognized as legit subjects as belonging one Her Majesty's 700 Out Island within Colony of Out Islands......Just couldn't make this up.........