Insight: The Grey Area Of Corporal Punishment In Schools May Have Made One Administrator A Sacrificial Lamb 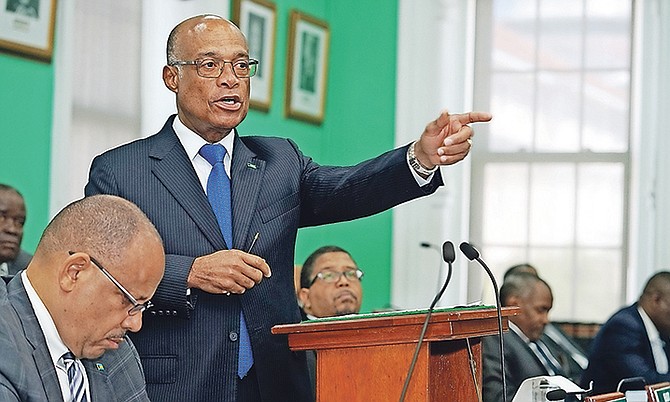 DURING the debate of the 2019-20 National Budget, in his contribution, Minister of Education Jeffrey Lloyd said Bahamians should decide what they want the government to do in relation to corporal punishment. Wisely placing the onus on the Bahamian people, the ball is essentially in our court. Now, where will we go from here?

In the wake of a parent of a St Augustine’s College student posting a picture on social media of bruises on his child’s bottom, there has been intense debate on this subject in recent weeks. Here we have two interesting polarities – wanting to maintain a sense of discipline within our children, but not to the point where it becomes excessive and abusive under the authority of others

As attitudes toward corporal punishment continue to shift globally, the country exists in a grey area. As traditional views collide with more modern perspectives on how children ought to be corrected in the circumstance of wrongdoing, there is no clear impetus or push for our schools to alter their policies. Parents of the students are not even in total agreement on what should take place with some entrusting the school to discipline their children as they see fit, while others, such as the father in question, do not physically punish their children and would prefer if it is not done by the school either.

How do parents who do not believe in corporal punishment balance the desire to send their children to schools that have traditionally used this means of discipline? Is this communicated during PTA conferences, orientations, or otherwise? Or are we waiting for these instances to blow up in our faces, leaving us to scapegoat and prosecute individuals in the court of public opinion who are simply doing, as they see it, their jobs?

On the other hand, how do schools manage the various expectations from parents and ensure they are fostering an environment that mirrors a rules-based society?

These are not easy circumstances to manage overnight. However, we must begin somewhere.

Corporal punishment in schools has been completely banned across Canada and all European countries. And though 19 states in the US still allow corporal punishment, it has certainly become frowned upon in most instances as a result of scientific research debunking the myth that it is a deterrent to bad behaviour.

In fact, risk factors of corporal punishment in the home and in school are quite similar; both essentially leading to adverse physical, psychological and educational outcomes.

Nevertheless, in a Third World society, we continue to be satisfied with lagging behind.

That said, who should really be at fault for what has occurred – parents, educators or both? A school dean is now facing criminal charges for doing his job, and without a new policy banning corporal punishment, it is likely this won’t be the only case of this kind.

As long as we fail to find answers, we must be careful how we go about destroying reputations, criminalising people and, most importantly, the messages we’re sending our children.

Conversely, we should not accept having the autonomy to use force as a disciplinary measure on our children. Without checks and balances to determine one’s state of mind, how do we determine when use of force crosses the boundary of being excessive? It’s not like parents sign waivers on the first day of school, as for too long it has been one of those things you just knew takes place. Leaving room for too much ambiguity can lead to these kinds of issues.

It is a system set up to backfire, and indeed, it just may have with this recent controversy giving a black eye to such a highly regarded institution.

Certainly, the Minister of Education’s refusal to be pulled into this debate is totally understandable. The Bahamian people have to be the ones to decide how we move forward on this as a matter of policy.

There will be uncomfortable conversations to have and decisions to make. However, they must be had. Else, history is doomed to repeat itself, and it will be unfair to litigate school administrators who have, in a sense, already been convicted by a jury of their peers in social media.

Additionally, if corporal punishment will be made illegal in schools, perhaps we should take it a step further and consider criminalising it at home. We ought not be hypocritical as a society, and as Education Minister Lloyd puts it, “half kill” our children at home, but be quick to shame educators.

Parents and educators should always be on the same page. When children commit an act that warrants discipline and they are in the care of educators, a discussion should always take place prior to an agreed upon form of correction. There should never be a scenario where parents are finding out after the fact, and as such, one can understand this particular parent’s frustration.

Hopefully, as school is about to break for the summer, administrators will spend some time revisiting their policies and ensure this unfortunate circumstance can be avoided in the future.

One can plainly see the level of aggression that has sent the great ideals of our nation spiralling out of control. Paradoxically, we refuse to take the steps to alter the country’s course by ignoring how much of society’s ills begin in the home. Quite a tragedy.

Lloyd’s call on the Bahamian people to look themselves in the mirror should not be taken for granted.

Unfortunately, as we are a people deathly stuck in our ways, his plea may have fallen on deaf ears.

When I was growing up, I remember a very old administrator who all the children were afraid of using corporal punishment, but only in the palm of the hands.

I think sometimes administrators and some teachers want to use their cane all about the body, "going to town" on some of those students. To an extent I understand that some of these children are really rude because some of the parents are really rude, so it comes from the environment.

Corporal punishment is enshrined in our Constitution, Penal Code and Education Act ...... Jeff Lloyd is only talking to hear himself.