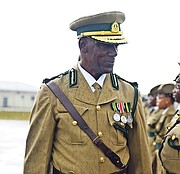 THE Progressive Liberal Party owes the Public Service Commission an apology over its criticism of the appointment of Charles Murphy as Bahamas Department of Correctional Services commissioner, Public Service and National Insurance Minister Brensil Rolle said yesterday as he defended Mr Murphy’s appointment.

He said the commission is an independent body that made its decision based on qualifications, following guidelines.

He also said: “They went and advertised locally and internationally so any Bahamian living anywhere in the world would have had an opportunity to get the job and so I say the PLP again went overboard and in order for us to take them seriously they must apologise to the Public Service Commission who is an independent body who selected the best person based on qualifications and experience and the least of experience that was before them.”

Mr Murphy officially accepted the mantle as the new commissioner of BDCS on April 16, although the appointment took effect January 29, 2019.

PLP Leader Philip “Brave” Davis said his party was not in support of the appointment saying the process did not appear fair and transparent.

Doan Cleare and Bernardette Thompson-Murray alleged in the affidavits that National Security Minister Marvin Dames forced them to take vacation leave to facilitate Mr Murphy’s appointment, their junior, as commissioner of corrections.

They want the Supreme Court to quash Mr Murphy’s appointment and declare it invalid.

Mrs Thompson-Murray, the highest ranked woman in prison service history, and Mr Cleare have careers spanning 30 and 25 years respectively. In documents filed earlier this year, they allege they were inexplicably forced to take vacation leave last year even though Mr Murphy had accumulated more weeks of vacation than their combined total.

When their leave ended, they say they were left in limbo by Ministry of National Security officials who ordered them not to return to BDCS but who failed to assign them new jobs.

In his affidavit, Mr Cleare also alleges Commissioner Murphy actively campaigned for the Free National Movement in the lead up to the last general election “in open contravention of public service policy”.

Munroe & Associates is seeking a Supreme Court order quashing the recommendation of the Public Service Commission and the minister of national security to appoint Mr Murphy as commissioner of corrections, a declaration that the applicants’ leave is not properly accounted as vacation leave, that the decision of the acting permanent secretary to refuse the applicants to return to their substantive posts as deputy commissioners is unlawful, consequential relief, costs and damages.

It is highly irregular for senior law enforcement officials to sue the government while in the service.

Is there no other lawyer in this country than Wayne Munroe? With the amount of cases he have going on in court,what quality of representation can he give?