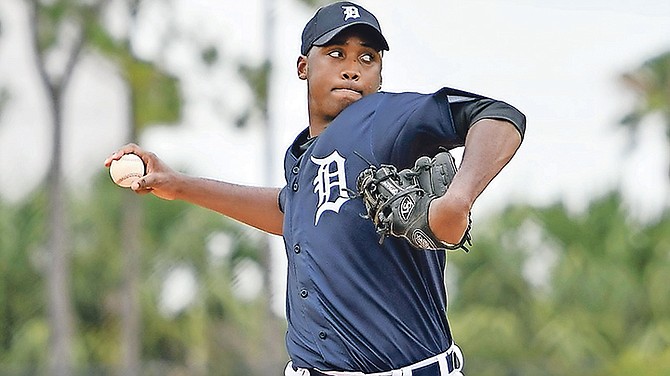 THE country's top pitchers at the professional level produced mixed results as they made their season debuts in minor league baseball this week.

Chavez Fernander earned a win for the Connecticut Tigers in the New York-Penn League, while Tahnaj Thomas suffered the loss for the Bristol Tigers in the Appalachian League.

Fernander's final line included four strikeouts with two hits given up. For the second straight night, the Tigers' starter did not surrender a run in the outing.

The Tigers were able to push across the first and only runs of the game in the fourth inning.

Fernander was selected by the Detroit Tigers organisation last June in the 35th round with the 1,035th overall pick.

A right-handed pitcher at 6'3" and 205 pounds, he has been reported to have a 95mph fastball. He was drafted out of Polk Community College after his sophomore season, the second Bahamian pitcher selected from the Eagles roster in as many years after the Colorado Rockies selected Shemiko Smith in 2017.

In his first season, Fernander spent time with the GCL Tigers in the Gulf Coast League before a brief call up to Connecticut. He finished 4-1 with a 1.59 ERA, 41 strikeouts and five saves.

Thomas struggled in his season debut and the Pirates dug themselves into an early hole which proved insurmountable, in a 15-1 loss to the Burlington Royals.

Thomas recorded only one out in his Bristol debut, allowed four runs - two earned - on one hit and two walks to earn the loss.It marked the third consecutive home-opening loss for Bristol, and their seventh home-opener loss in the last eight seasons. Thomas is currently the No.16 ranked player in the Pittsburgh Pirates organisation and No.5 among pitchers, according to MLB Pipeline. Last season, Thomas appeared in eight games (six starts) in the Rookie League, recording a 4.58 ERA and 1.20 WHIP with 27 strikeouts in 19.2 innings. He was assigned to the AZL Indians 1 in the Arizona Rookie League.

Trent Deveaux had a productive day at the plate in his debut for the AZL Angels in the Arizona Rookie League. He went 3-5 with one RBI and scored one run in the 8-4 loss to AZL Giants Orange.

Deveaux is listed as No. 15 on the Angels' list of top 30 prospects and was voted one of the fastest players in all of the minor leagues by Baseball America.