We Want To Work With Vendors, Says Ministry 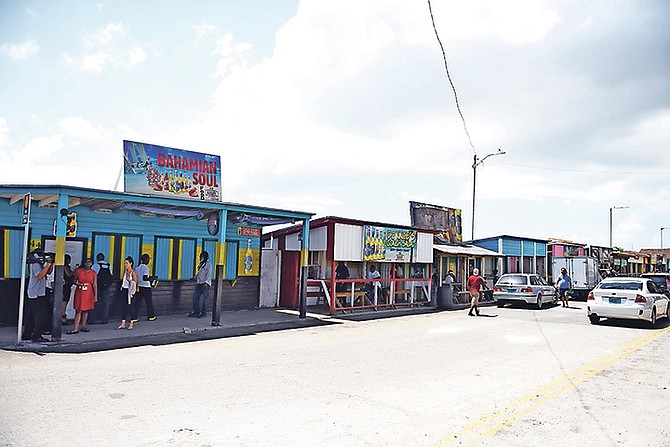 THE government has reportedly considered partnering with a vendor-backed entity for the development of Potter’s Cay Dock, the Ministry of Agriculture and Marine Resources has revealed.

In a statement addressing concerns raised by vendor associations attached to Potter’s Cay, the ministry said it has met with vendors and their associations to discuss development plans for the area, including the recommendation that the groups form themselves into an entity that could submit a proposal to government as a partner.

The statement noted that while the criteria for participation at Potter’s Cay under a public-private partnership (PPP) has yet to be determined, there remains a strong likelihood that the government would give preference to vendors “who have a well-established tenure at Potter’s Cay and are financially current.”

On Tuesday, heads of vendor associations called for a reversal of a security strategy which envisioned barricades erected under the Paradise Island bridge to prevent customers from parking in front of stalls, claiming the move has negatively affected sales at Potter’s Cay.

Progressive Liberal Party leader Philip Davis has asked for vendors’ rent to be waived due to a reported slowdown in business.

On the issue of parking and police harassment, the ministry contended: “Vendor participation is critical to the consultative process as it relates to the proposed project to revitalise Potter’s Cay. That is why the ministry has taken purposeful steps to restore order to that area. Loading zones are designated for the specific purpose of offloading supplies and services and were never intended to be utilised as parking spaces. This is not unique to Potter’s Cay.”

The statement added: “The police have long expressed concerns that parking in front of the stalls poses grave safety and security challenges. The misuse of the loading zones prohibits access of delivery vehicles and impedes the regular flow of traffic. The foregoing concerns were communicated to vendors earlier this year.”

The ministry insisted the parking lots east and west of the bridge have been equipped with lights and are routinely patrolled by the police.

The ministry said it recognises that small business and entrepreneurship are keys to a stable economy, and as such, has undertaken a number of plans to spark renewed public confidence in Potter’s Cay while working to support vendors in the same.

“Vendors have been encouraged to make repairs to and maintain their properties. The ministry has also been working with BPL and the Port Department to bring resolution to the issue of power supply on the dock and other improvements,” the statement read.

On the request to waive lease fees, the ministry added: “We continue to encourage vendors to pay the very modest fee of less than $50 per month to assist with the proper maintenance of Potter’s Cay. This will create an environment that will ultimately grow their businesses.”

Meanwhile, in an interview with The Tribune yesterday, National Security Minister Marvin Dames maintained that police activity at Potter’s Cay has not exceeded any “normal practice”.

He said while he is concerned with claims made by the vendors, he doesn’t see the correlation between the new traffic policy and the loss of business.

At least the government seems to be awakening to the fact that the small, struggling vendors are just as important as the large multinational companies like a Bah Mar or an Atlantis. They also need government support. And it a sense of maturity and hopefully a recognition of this fact that the government has reached out to these vendors in hopes of not only rebuilding their businesses but taking them to a better and higher level. Which country can you go to and see that the local citizens and prohibited from participating in the local economy whilst foreign-owned businesses flourish?