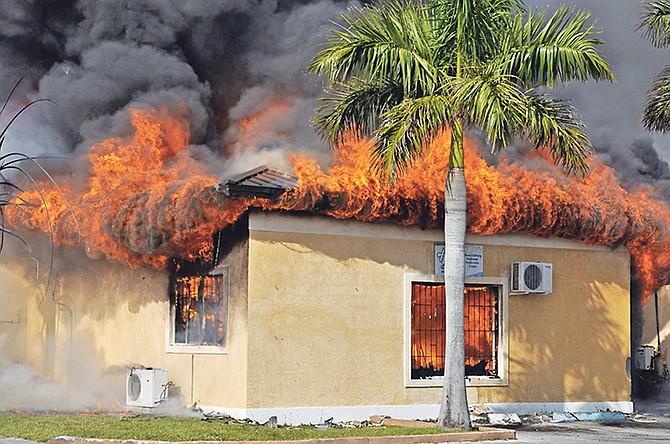 The fire at Britannia Mini Mall.

ASSISTANT Commissioner of Police Samuel Butler said that following preliminary investigations, the Police Fire Services has pin-pointed the cause of the fire at the Britannia Mini Mall as arson.

The matter, he said, is expected to be concluded soon.

“We have someone in custody; we are still working with that individual and at the end of the day we should have some conclusion. We are satisfied with the interview and we are now waiting on response from Forensics before we make a final conclusion in the matter,” he explained.

The Britiannia Mini Mall in Caravel Beach, Freeport, was destroyed by fire on Wednesday, displacing some 13 tenants who operated businesses at the location.

A woman was taken into custody in connection the incident and is assisting police with their investigations.

In the meantime, the owner of the mini mall and his daughter plan to rebuild. They are also trying to raise money to assist tenants who lost everything and did not have insurance coverage.

A Go Fund Me campaign was started two days ago. The goal is to raise $100,000. They are planning to hold fundraising events on March 15, by having a car wash and cook-out from 12 noon to 5pm.