Gibson’S Happy To See The Water Flow On Ragged Island 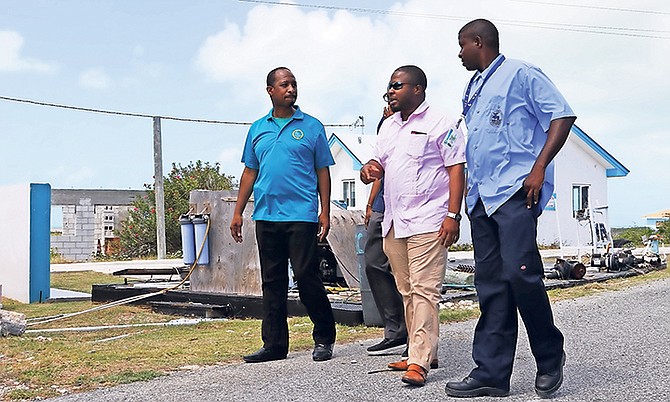 THE Water and Sewerage Corporation has an ample supply of water available in Ragged Island for residents or anyone who wishes to construct a home or business in the southern island.

Adrian Gibson, WSC chairman and MP for Long Island, kicked off a busy day there last Thursday before moving on to two other southern islands.

At the first stop, Mr Gibson, along with other WSC officials, conducted assessments of the reverse osmosis (RO) plant in the Duncan Town settlement.

“You can mix cement or do whatever you need to do,” said the chairman. “They are supplied. We have a 15,000-gallon capacity for storage in addition to what we produce every day. The residents in Ragged Island are more than adequately sourced.”

Ragged Island is home to an estimated 32 Bahamians. In 2017, Hurricane Irma devastated the sparsely populated, remote island leaving it without basic utilities, including water.

Mr Gibson emphasised the government’s obligation to provide water. He said there is anticipation for further construction and development, so the corporation has factored in the island’s growth by doubling the water capacity.

“We’re assessing our plant and works that we have to carry out in Ragged Island. During the storm we lost that plant down the road and we’ve replaced that with double the capacity.

“The previous plant, approximately 2,000 gallons, was blown away. This plant has the capacity for 5,000 gallons. We anticipate doing our part to restore Ragged Island,” he said.

Mr Gibson noted that the plant is now owned and operated by the corporation. “This plant is one of the first ones that we took back. It is fully owned, fully operated by the WSC which cuts out the middleman and we’re able to save some $50,000 per year that we would have spent supplying the people of Ragged Island with water,” he added.

“Throughout the islands we have had various contracts that have been quite onerous on the corporation. We’ve formed a RO unit since my appointment and that unit is responsible for overseeing and administering contracts – taking over plants and so on.

“We have special RO trained engineers that we’ve recruited. Once the contract expires we’ll be taking over.”

A standby generator, a solar power reverse osmosis plant and electrical upgrades are among other initiatives on the drawing board for Ragged Island.

The delegation also travelled to Crooked Island and Acklins. While at Acklins, it was announced that improved water quality, the installation of generators and a new RO plant are among the new initiatives WSC has planned for the community.

Acklins’ residents are not currently charged a fee for water, but Mr Gibson noted that as the corporation transitions into a more “efficient” system the possibility exists that customers will be required to pay for the service.

“We’re conducting a lot of remedial work in respect to the water quality. We’re also installing a new reverse osmosis plant at Lovely Bay. That plant will be able to supply a community that has had issues with salinity and coloured water for some time,” said Mr Gibson.

“We’re also putting in place generators. One of the complaints we’ve had is that once the power goes off, water stops flowing. So we’re going to put generators at each of these plants.

In the event of a hurricane or other natural disaster, the corporation has improved the storage capacity of water in Acklins.

Mr Gibson said that with eight 5,000-gallon tanks, the island now has 40,000 gallons that could possibly last for one to two weeks.

Marvin Campbell, deputy chief councilor, is thankful for the improvements to the water supply in Acklins.

“A lot of residents are building new homes at this time and it would bring a relief for persons who depend on wells. We appreciate it for the good people of Acklins,” he said.

Meanwhile, some 250 residents in Crooked Island can look forward to the installation of new water mains in several settlements.

Mr Gibson said the project includes the supply and installation of approximately 83 service connections and five miles of water mains in the settlements of Colonel Hill, Timothy Thompson and Church Grove.

“At present there is a tender out for the works here. We expect that to close on March 18 and after that we will do an assessment with the Caribbean Development Bank (CDB). A winning bidder will be selected and we will return to Crooked Island to sign that contract,” said Mr Gibson.

Plans are also afoot to install a new RO plant in Crooked Island that will produce approximately 12,000 gallons of water a day. The plant will be owned and operated by WSC.

“The tanks will allow for resilience and storage during hurricanes or any kinds of natural disaster. There will be enough tanks for people to have water in storage for two weeks.”

When will Hope Town Abaco get public water?

Do you have more than 32 Bahamian residents? Have you been waiting for more than two years?

Has the Government lifted the "uninhabitable" label off Ragged Island, yet???????? At least the people can access potable water now ............ Thank God.

Great job Mr. Gibson! The way you manage Water and Sewage is a breath of fresh air!