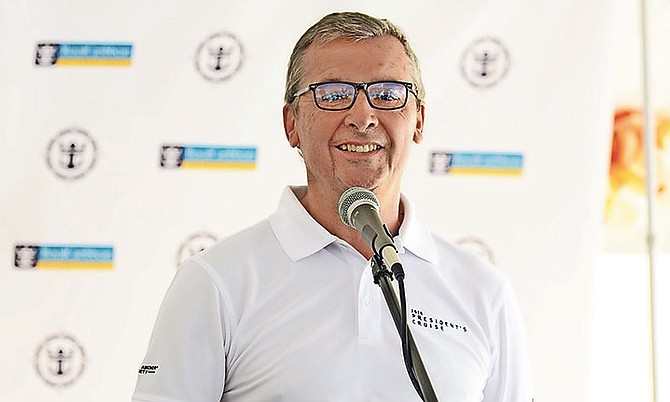 ROYAL Caribbean International’s top executive says New Providence is not a “worrying destination” when it comes to the safety of its passengers.

Michael Bayley, president and chief executive officer, said the assertion was based on RCI's statistics coming out of all 300 of the cruise line’s destinations.

He was asked whether crime and criminal activity was a concern for RCI given a US crime warning issued last month.

“It’s always a concern,” he said in response to a question from The Tribune on Friday before a presentation to the Rotary Club at the Nassau Yacht Club.

“I think we travel to literally over 300 destinations around the world.

“We’re the largest single cruise line, Royal Caribbean International, in the world and so we operate everywhere and it’s always a concern if there are any advisories from any country towards any particular destination in which we are quite frequent. So it’s always a concern.”

He continued: “I think we’ve found when we looked at our statistics in terms of any incidents that occur with our guests, and we are a pretty major cruise line in terms of how many people we bring to the Bahamas…The Bahamas doesn’t come out as a particularly worrying destination, and so it’s not something that we are concerned about.”

The US Department of State issued a “Level Two: Exercise Increased Caution” alert in late February which warned US citizens that violent crime such as burglaries, armed robberies, and sexual assault were common in tourist areas in New Providence. The alert noted the vast majority of crimes occurred in the capital and Grand Bahama, but added the Family Islands were not crime-free.

National Security Minister Marvin Dames highlighted the decline of crime in the Bahamas in the aftermath of the damaging travel advisory.

He said last month that the 2018 crime statistics were the best The Bahamas has seen in more than a decade and insisted numbers continue to trend down this year.

“Every country has the right to issue an advisory. A country issues an advisory based on whatever they feel that their citizens ought to know,” he said at the time.

“We will continue to work with countries from around the world to see how we work together to collectively focus on the things we need to focus on to ensure that we meet a point where we’re all happy.”

He continued: “‘Are we at a place where we’re happy?’ No we are never happy because there is a lot more that we can do and we are doing it, but it is a process. As I said before we did not get here overnight.

“…These things have manifested itself over decades so it’ll take some time for us to address them in a very effective manner so Bahamians and visitors alike can feel safe to move about this country whenever and wherever they choose. I am pleased to say this we are headed in the right direction.”

This is what the R.C.L. rep says but I have been told that passengers on board Carnival ships are given brochures telling them to NOT go to fish fry. Do you think it could be because they have to navigate the broken up concrete path and repeatdly tell the drug dealers no or having to refuse paid rides offered by hackers or walk back to the ships at night on the dark dangerous path while thieves are snatching bags, cameras and phones ! If the Fish Fry is such a tourist attraction, you would think the lazy ass Police across the street would unhindge their collective backsides from their comfy chairs and get on the beach to ensure tourist safety and that the Ministry of Tourism would repair, light up and maintain the area and posts security on Long Wharf/Junkanoo Beach to promote the Fish Fry and it's vendors instead of allowing the cruise ships to demote it !!! This is NOT rocket science Mr. Minister !!!

For some, the concept of procactivity may be as difficult to grasp as rocket science would be to others!!!

Who knows the reason, but they do warn tourists and they tell them not to wear their jewelry or carry cash.

Every other week their talk is different.

The man's a politician, they tell us one thing but tell the tourists another! That's life!

Nassau looks and smell's so nasty none of the passengers bother getting off the boat......