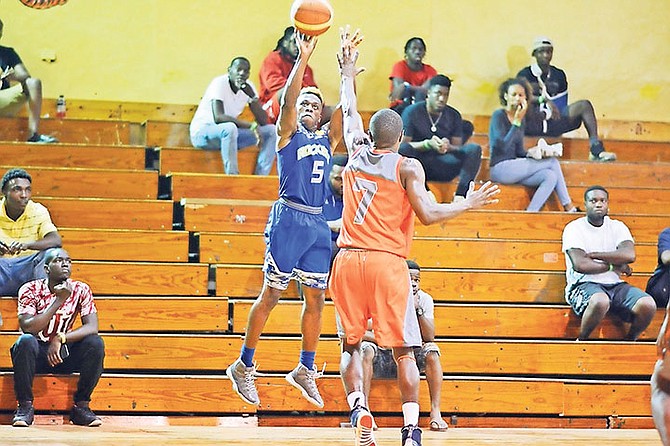 The Stampers and the Rockets in action. Photos: Shawn Hanna/Tribune staff

THE Triple K Stampers and University of the Bahamas Mingoes advanced to the semi-final of the New Providence Basketball Association playoffs.

On Monday night at the AF Adderley Gymnasium, the Stampers stomped past the Sun Oil Rockets 117-113 in overtime in the third and deciding game of their first round playoffs.

With the win, Triple K won the series 2-1 and will go on to face the pennant winning Your Essential Store Giants in game one of their semi-finals at 7:30pm on Friday.

And in the feature contest, the University of the Bahamas advanced to the division semi-finals with a 92-82 decision over the JD’s Seafood Shockers.

While the Shockers got eliminated, losing the series 2-1, the Mingoes will advance to the semi-final when they will face the defending champions Commonwealth Bank Giants at 8:30pm on Friday.

Kemsy Sylvester picked the University of the Bahamas and carried them on his back with a game high 29 points with five rebounds, four block shots, three assists and two steals.

The University of the Bahamas controlled the first half, opening a 28-15 lead at the end of the first quarter and extended it to 53-34 at the mid-point.

As they came out of the locker room, the Shockers responded in a 23-17 spurt to cut the deficit to 70-57 at the final break. In the fourth, they outscored the Mingoes 25-22, but it wasn’t enough to get them over the hump.

Adam Johnson came off the bench and pumped in 23 points with 10 rebounds and two steals to pace the Shockers. Franko Bethel also got off the bench with 12 points and eight rebounds.

The Stampers stayed alive and got the extra five minutes, thanks to Wilben Seraphin’s lay-up with just seven seconds as the game closed out in regulation.

The Rockets went ahead 69-64 at the end of the third, but the Stampers stormed back in a 35-30 spurt in the fourth to level the score at the end of regulation.