No Restriction On Cannabis-Based Products 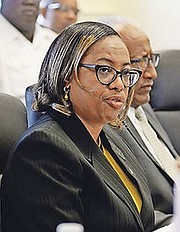 THERE are no restrictions on the import of topical products containing cannabis compound CBD, according to Customs Controller Dr Geannine Moss yesterday.

Dr Moss told The Tribune the enforcement agency takes instructions from government and regulatory agencies on prohibited or restricted goods, and to date, there have been no instructions mandating the seizure of products containing cannabidiol or CBD.

In an interview with The Tribune, Dr Moss stressed the ban on importing the plant itself remained intact.

“The Customs Department is an enforcement agency,” Dr Moss said, “and we do a lot of agency duties for other government bodies and regulatory agencies, so we have prohibited and restricted goods list.

“Unless, or until, the relevant agency who would regulate the import of any substance,” she continued, “until they say to us that substance or a substance is restricted - and restricted would mean it would need to have prior approval from whichever regulatory agency that oversees the item, they would need a permit or import - or is prohibited.

“We have gotten no such instruction from any agency however you must appreciate when those things come in, they are coming in as lotions, hair pomades, creams, topical items.”

It was not explicitly stated whether this extends to edible products containing CBD as attempts to reach Dr Moss for further explanation were unsuccessful.

The Tribune was also unable to confirm whether topical products containing THC, the cannabinoid that creates a mind-altering “high” when consumed, are restricted.

Dr Moss’ comments come as the Bahamas National Commission on Marijuana (BNCM) prepares to submit its first draft on Bahamian attitudes on the controversial plant— the first step in a larger debate on the prohibition of medical and recreational use.

Medical marijuana can be prescribed as the whole, unprocessed marijuana plant or its basic extracts, and the major active compounds in those extracts, are the cannabinoids CBD, THC, and cannabinol or CBN - which is mildly psychoactive with powerful sedative properties.

Popular uses of CBD - which is not psychoactive - include relief from chronic, muscle pain, convulsions, and inflammation; and the use of CBD oil has become immensely popular.

The Dangerous Drug Act restricts “every compound, manufacture, salt derivative, mixture or preparation of such plant or resin” unless given a special permit for medical or scientific purpose.

In an earlier interview with The Tribune, Health Minister Dr Duane Sands confirmed there were no licences issued by the Ministry of Health, as required by the Dangerous Drugs Act, to import cannabis-derived products, but stressed it was not his ministry’s job to enforce or intercept goods.

She continued: “You have these trends, a while ago it was Moroccan oil, Argan oil. Until (Department of) Customs get instructions form whichever agency, the Bahamas Pharmacy Council, the Ministry of Health, then we would step in and any product we find with those items in it, of course then we would seize, or if they say we need a permit then we will look for permit.

“We do that all the time, every time,” she added.

She needs to get this information to Dr. Duane Sands who is saying you have to get special permission.

This seems strange. If there's an item that's in controversy why not just pick up the phone and ask? It's like both sides are playing a game of if you don't ask I won't tell.