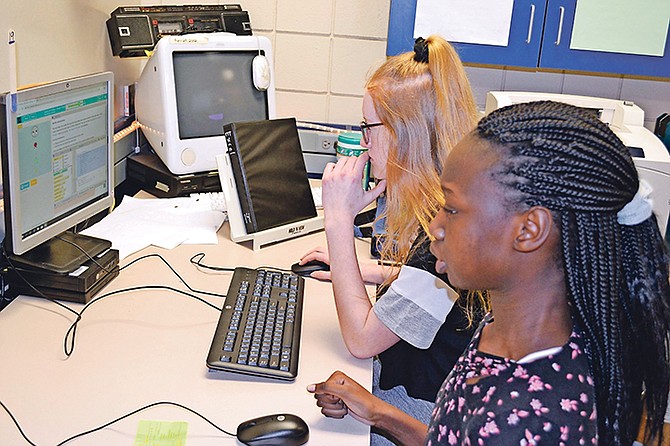 (AP) When eighth-grader Alyssa Lingen started her information and communications technology class this year at Patrick Henry Middle School, the art student was repulsed by anything related to computer science, she said.

But the minute she saw the little elephant she created move across a computer screen, dodging bad guys to gather coins, computer science completely changed her future, she said.

That wouldn’t have been the case, though, if her teacher, Jason Whiting, had not opted to pioneer a coding course for middle school students this year. The course comes from Code.org, a national nonprofit focused on giving students access to computer science skills in schools for women and underrepresented minorities, according to the organisation’s website, the Argus Leader reported.

He’s the only one in the Sioux Falls School District doing so, and he hopes teaching students how to build their own video games will only be the jumping off point for students to take computer science skills into future careers, he said.

“It’s really good,” Lingen said. “When I came into it, I didn’t think I was going to like it at all, and then I started learning how to code. ... And now I’m planning on taking JavaScript coding in high school, actually.”

Whiting chose to start the course after doing six years of the organisation’s Hour of Code event, which provides one-hour coding tutorials in 45 languages all over the world, he said.

He realised he could help teach programming languages on a larger scale for his middle school students by reaching them through something most of his students love, he said.

“The collaboration, which you can see in the classroom right now, the critical thinking, the problem solving, they get all those skills along the way as they’re learning basically a second language,” Whiting said.

And because each video game is different and personalised, students have thrived, especially after getting feedback from their peers, Whiting said.

Students are even researching how to code their own games outside of school hours, and bringing those skills back to the class, going beyond what the basic curriculum calls for, Whiting said.

The course took eighth-grader and regular gamer Jury Okene out of her own comfort zone, she said. She created a little alien whose mission is to collect silver coins versus gold coins, she said.

“I learned mostly about being patient and how to look more into things,” Okene said. “Sometimes, the mistakes can be obvious. And I liked collaborating with my peers. Usually, I don’t talk to many people, but it was a good experience.”

His students may never use coding in JavaScript beyond his class, but they’ll have at least a basic knowledge for how things work, Whiting said. That’s enough to know students like Okene and Lingen will go into high school next year with new skills they can apply to their daily lives, he said.

“These students now, they all play video games,” Whiting said. “You hear them now, talking about Fortnite. Now they’re understanding how complex those things they use every day are. And it doesn’t matter what career they go into, they need problem solving. They need critical thinking, and they need collaboration.”

While graduation might be a few years away for Lingen, she’s already thinking past her freshman year of high school. She now wants to become a programmer, a complete 180-degree turn from what the artist wanted to do before taking Whiting’s class, she said.

“Creating something on a computer I can control and the game process of it is a lot of fun,” Lingen said. “It’s amazing, and it’s never really finished because you always want to go back and add more or edit it to make it look prettier.”