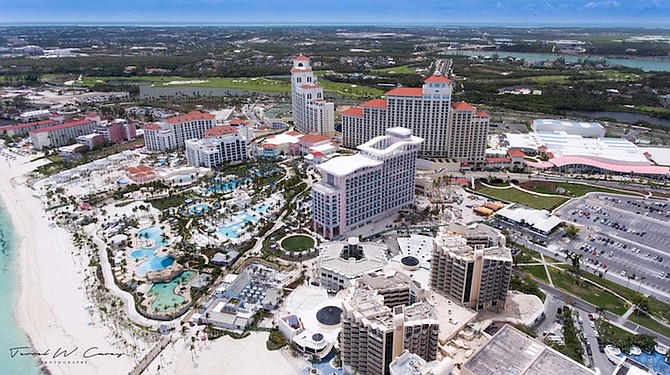 TWO men are wanted by police following a “brazen” smash and grab robbery at the John Bull store at Baha Mar yesterday afternoon.

The daring robbery means the hotel’s officials will now have to “rethink” the resort’s security plan, Minister of Tourism Dionisio D’Aguilar told this newspaper.

According to police, the duo entered the store located near the resort’s western entrance around 3pm yesterday, smashed several showcases and stole an assortment of watches and jewellery before fleeing the Cable Beach property on foot.

The men were said to be unarmed, or at the very least not brandishing weapons.

There were no injuries reported, police said.

When The Tribune visited the scene yesterday, roughly two hours after the ordeal unfolded, security personnel declined comment and said any updates on the matter would come either from police or the resort’s public relations team.

Subsequently, Robert Sands, the resort’s senior vice president, in a brief statement yesterday confirmed the incident, saying the matter was now a police investigation and that no further comment would come from the resort at this time.

Following the incident, a number of unsubstantiated reports of the incident were circulated across social media - most of which suggested that the two men were of slim build with dark complexions.

One of those reports said the men were dressed in orange t-shirts, one with a blue fisherman’s hat and the other in a dark tam, with both sporting sunglasses.

When asked if these descriptions fit the suspects being sought, police yesterday declined to comment.

In an interview with The Tribune yesterday, Mr D’Aguilar called the ordeal “most unfortunate and reprehensible.”

“A situation created a crime of opportunity today, and two robbers took advantage of this lapse and perpetrated a brazen act. As it stands, the hotel will now have to rethink its security plan, as police look to bring this matter to a close,” Mr D’Aguilar said, when made aware of the incident.

“It breaks my heart that in pursuit of a short-term gain, these men directly jeopardised the economic impact this hotel has had on the lives of so many Bahamians. I Implore the community to work to identify these men and turn them over to the authorities,” he added.

John Bull has been a target for brazen thieves in the past.

Last August, two New Providence men were charged in the Freeport Magistrate’s Court in connection with a robbery at the luxury store in Grand Bahama.

The men were charged with conspiracy to commit robbery. It is alleged that on July 23, 2018 the accused with others, who were unknown, conspired and stole 35 men’s and women’s Rolex watches and two Breitling watches valued at $427,000.

They pleaded not guilty to the charges.

According to initial reports, two men disguised as women, wearing long wigs, entered the John Bull Store at the Port Lucaya Marketplace on the morning of July 23, 2018 and smashed a glass display case stealing a number of high-priced watches and escaped in a stolen vehicle.

Police later said the stolen merchandise was valued in excess of $900,000.

Guess who did it

Are you racial profiling again?

The Wicked Witch of The West? LMAO

If Baha Mar security footage is unable to trace these guys back to when they first entered the property then either their system needs overhauled; these guys know the security system and coverage areas very well or; they have someone on the inside.

This is a huge property anybody can get in to the retail area, but with all the commotion created by the glass breaking (multiple as stated) how the heck did they get off property? I’d assume the second the first smash happened, Security would have been notified, which include canine units, one would think they could be stopped before they got off that vast property

It seems that since John Bull has become a regular target of these type robberies, they must now do more to enhance their security and make themselves less of a target for thieves.

A simple Case of “non-existent” Security, as it would take at least 10 to 15 mins to escape the the “Baha Mar” Prperty on foot and then a further 5 to 10 nw to exit the designated Ring Roads by car, with all of such routes easily capable of being blocked.