Iachr President: Detention Not The Answer To Bahamas' Immigration Challenges 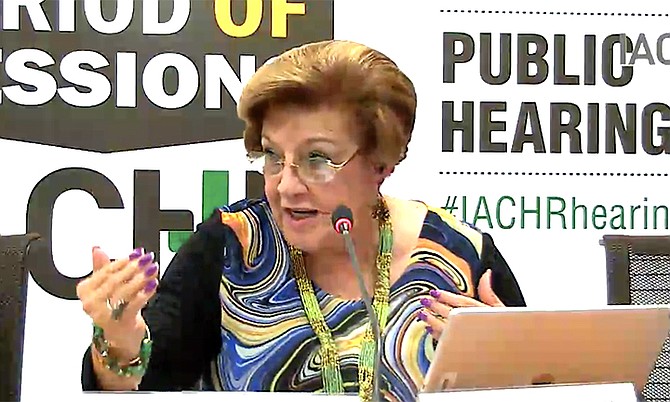 DETENTION is not the answer to the country’s immigration challenges, according to IACHR president Esmeralda Arosemena de Troitiño.

This is the second time the country's use of detention has come under scrutiny by the body.

The Bahamas government was called before the 172nd session of the Inter-American Commission of Human Rights (IACHR) to respond to a petition on the treatment of migrants and their descendants from Rights Bahamas and the Washington-based group Robert F Kennedy Human Rights.

The issue of statelessness due to the lack of documentation and the country’s citizenship laws was also raised by the IACHR panel, which signaled a desire to accept the government’s invitation to conduct a site visit at its earliest opportunity.

Rapporteur Margarette Macaulay said: “There are so many stateless children who were born in the Bahamas and cannot get citizenship because they cannot provide the sufficient documentation in order to get it, and even when they’re 18 they have to apply for citizenship within a certain time or they miss the boat if they exceed that time.

“This is extremely difficult to accept and the commission wants to work with the Bahamas to see how we can resolve this issue.”

State Minister for Legal Affairs Elsworth Johnson, who represented the government at the hearing in Jamaica, defended the country’s human rights record and urged the commission not to jump to conclusions over allegations presented by the civil society group.

Mr Johnson noted the government did not have an opportunity to object to the request for thematic hearings, and suggested the hearing could have been avoided altogether as the state considered the claims “unsubstantiated and duplicative”.

This is the second time the civil society collective is presenting to the IACHR, the first hearing was in 2015.

However, this is the third time the matter of migrant rights has been brought before the OAS human rights body.

The Grand Bahama Human Rights brought a petition against policies introduced by then-Immigration minister Loftus Roker in the late 80s.

On Friday, activists presented to the commission on frequent immigration raids and round-ups; deportations of people born in the Bahamas; the demolition of shanty towns; children being turned away from school due to lack of documentation; and ongoing threats to human rights defenders.

On matters raised that are currently being litigated in court, Mr Johnson urged the commission to respect the principles requiring exhaustion of domestic remedies before it gives any consideration.

“With respect to the allegations of entrenched racial discrimination and xenophobia,” Mr Johnson said, “it is expected that in any society where there are significant migrant populations, there are bound to be persons or pockets of persons who harbour anti-immigrant sentiments.

“Such behaviour is neither tolerated, nor condoned, and certainly not encouraged by the State or any of its agencies.”

“It is also wrong to portray the remarks allegedly attributed to a single immigration officer (admittedly bigoted remarks) as being representative of Bahamian immigration authorities or Bahamian authorities generally," he said.

Mr Johnson also accused Rights Bahamas of spreading propaganda and lies to further their cause and further suggested many of their claims are based on generalizations and self-generated incidents.

“It appears that we are coming to conclusions without seeing the bundles,” Mr Johnson said, “without fully delving into the issues.”

He was referring to a package of documents sent to the IACHR in April that purport to refute claims made by Rights Bahamas, and expand on government policies and procedures.

During it’s presentation the civil society group argued there was no longer freedom of movement in the country due to its immigration policy.

Activist Louby Georges pointed to random and mass raids, checkpoints and roadblocks where civilians are made to show proof of their status on the spot or face detention and “illegal deportation”.

“I emphasize the right not to be detained because of migrant status,” Ms Arosemena said on Friday.

“It cannot be due to the fact of being a migrant, there is a prohibition of that. To be a migrant is not an offence, it is not a crime and prison, detention is for crimes, violations of the law.

Ms Arosemena stressed special protections were needed to ensure children born in the country could access education and resources critical for their naturalization. Government was asked to produce a figure of how many were currently de facto stateless.

“I want to know what precisely are the obstacles to children achieving this constitutional right,” she said, “because they have their constitution and recognition of the acquisition of nationality because they were born there, and we would need to know what those elements are that are preventing this situation from being achieved.”

“Detention is for other issues, other circumstances, but they are also holding the children,” she continued, “…what is the response? They are protected by the laws of the Constitution, by the child protection system. We worry in all the countries about the guarantee that the children by their special condition of vulnerability have special protection.”

Ms Arosemena said: “They must go to school at three years old, at primary and secondary level, because at 18 they must have finished school. If they had no training or resources and are not prepared to stand up for their rights, this is not conducive.”

Ms Macaulay added: “What kind of access do the poor migrants have to justice? Because I understand they have no legal aid. If that is so, what will the government intend to do about that?”

In response to claims about access to education, Mr Johnson said RB’s claim was based not only on “unsubstantiated hearsay, but on a single incident related by a parent”.

“Clearly a single incident cannot be extrapolated in support of a general allegation of “children” being turned away,” Mr Johnson said.

He also said that the University of the Bahamas did not turn away students who were citizens-in-waiting.

On conditions at the detention centre, Mr Johnson pointed to accolades received from the IACHR following a site visit in February. The commission was unable to physically visit the facility but commended the government on reported upgrades.

Rapporteurs on Friday underscored the need to conduct a visit given the conflicting information provided by the government and petitioners.

There was an overwhelming call by the panel for the government and civil society to collaborate to resolve issues, with technical assistance and resources from the IACHR.

For his part, Mr Johnson said there were ongoing discussions with civil society, but stressed Rights Bahamas could not continue to produce “deceptive information” as it created challenges for constructive dialogue on the issues.

He was referring to booklets produced by Rights Bahamas on migrant rights in the country, and alleged human rights abuses.

Mr Johnson took issue with the use of inflammatory stock photos to illustrate themes of abuse in the Bahamas, insisting the images could be interpreted as real events when viewed by people unfamiliar with the country.

Rights Bahamas member Fred Smith congratulated the government’s efforts to address the country’s “huge” human trafficking and sex trafficking problem, and underscored the willingness of civil society to partner with the government.

Mr Smith noted the government had extended an invitation for the international body to conduct site visits of the detention centre, but continues to deny access to local groups.

“But insofar as the issues related to migrants in the Bahamas,” Mr Smith said, “I’d like to distinguish between those Haitians who are illegally coming into the Bahamas which is a challenge for our government, as opposed to the many thousands of people who are born in the Bahamas and they’ve been there for 5-10-15-20-30-40-50years in some cases and they don’t have documentation.

Mr Smith said: “We implore the Bahamas government to stop treating those who are born in the Bahamas and who have lived there all their lives as if they are illegal migrants.”

Since these rights clowns seem to always have some say in the way things are done here concerning immigrants, then I would like to suggest they step up to the plate with the finances to cover all of these "humane" things we are supposed to do !!! You know, put your money where your mouth is and don't suggest anything they can't afford to fund !!!

Spot on! How dare these people demand that we taker care of every Jane, Dick or Baby Harriett that ends up in our country as a result of illegal entry.

Who is this woman===&gt; Ms Arosemena? She sounds so ignorant, & did her tongue fell on hot coals about these Haitian - Jamaican migrant illegal children with a FREE schooling in the Bahamas? When these illegal migrants parents illegally abuse the National Security of the Bahamas, & the Bahamas blessed these people of a poverty. Because in Jamaica no school is FREE, in Haiti NO school is FREE. So why is these politicians allowing these naïve people to make them to think the Bahamas is doing something wrong? I know for sure NO Haitian want to go to Jamaica for NO "better way of life", because of the high poverty. So STOP allowing these poverty country people to think they have some say in the Bahamas day to day affairs, in which they don't. Louby Georges, & Fred Smith never had it so good when their illegal parents burst down the walls illegally entering the Bahamas. The Bahamas DID NOT ask for NO illegal migrants to come here, & they brought their poverty - chaos with them. The Bahamas was a quiet Christian Nation, until these illegals stepped foot on Holy ground, with their secular ware.

I'll bet neither of these women live in their own country of birth. SUCK TEET!!!!!!!