So Much Pain: Families’ Agony As They Grieve Over Four Killed, Police Set Up Special Squad To Track Targets 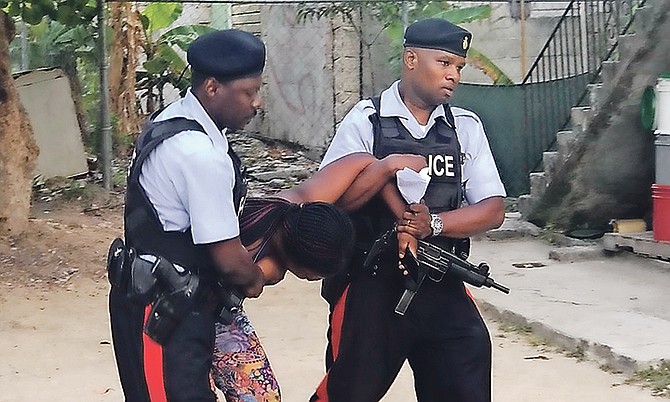 Police help a family relative as she learns of yesterday’s double killing on Kemp Road.

POLICE are investigating a drive-by shooting that left two men dead and one man injured in hospital yesterday morning.

The homicides came hours after two men were shot and killed at Potter’s Cay Dock on Wednesday night.

According to Superintendent Shanta Knowles, shortly after 7am police received reports of gunshots being fired in Whites Addition, Kemp Road and that a number of people were injured.

At the scene, Supt Knowles said: “Once the officers got here, they discovered that two persons were in fact injured and confirmed deceased. Another [person] was transported to hospital and is in stable condition.”

Speaking to reporters during a walkabout in the area hours after the shooting, Royal Bahamas Police Force Commissioner Anthony Ferguson said: “The incident involved a single vehicle that drove through this location and occupants from that vehicle fired indiscriminately thereby fatally injuring two persons.”

Police are actively trying to identify the occupants of the vehicle in question. “So again, we are appealing to the people in the Kemp Road area to assist us with this investigation,” Supt Knowles said. “Give us as much information as possible that we can bring this matter to a close quickly.”

She added: “Police are asking anyone with information that can assist with this investigation to contact the Central Detective Unit at 502-9991/2, Crime stoppers at 328-TIPS (8477) or the nearest police station.” 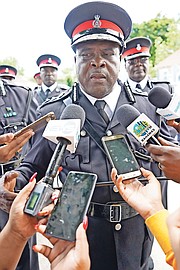 Commissioner Ferguson, pictured below, later noted the double homicide from Potter’s Cay Dock and the killings yesterday are not connected.  Supt Knowles could not say whether the victims were known to police at this time.

The Tribune understands the Kemp Road victims are Valentino Cox aka “Porky” and Timothy Lewis aka “Amber” however, their identities were not released by police.

The most recent killings pushed the country’s murder rate to 28, according to The Tribune’s record.

Distraught relatives and members of the community flooded the scene where the double homicide had taken place.

Kelly Ferguson, a girlfriend one the of victims, said: “I look calm right now and I’m trying to be as calm as possible, but I just lost everything.

“I just lost my children’s father, my husband [and] my everything. They are telling us work with the police, but the police [aren’t] working with us. The police and the people are the community. Together we have to work to make things right and it ain’t working (sic).”

A resident who preferred to be unnamed, said: “The double homicide that happened this morning was very senseless. We have elderly people around here, children walking to school and right there where the murder happen children play ball there every day.”

In the face of these brazen shootings, Supt Knowles said the country needs to find ways to encourage young people to resolve their conflicts without resorting to violence.

When asked if the police were concerned about the two double homicides, she said: “We are always concerned about all matters of crimes that happen in our community. We have not ceased any of our operations since this commissioner came into office.”

The superintendent said fake news spread on social media contributes to a lot of the fear in the country.

She said: “We want to encourage those who are using social media to be concerned, be professional, be aware of what they are doing—do not spread information that is false. Wait for the proper authorities to give the information because it is causing fear in our communities.”

Why are all of these god-fearing, law abiding, model citizens being executed? Inquiring minds want to know!

One can only assume that god wants them back.

They’ve gone to a better place.

So why are people sad?

FAKE NEWS causing fear.?? The reality of the Murders is causing fear. It can be dressed up or denied it is a reality,

It is a sad situation all of the murders. BLACK people Killing each other.

I CAN OFFER A POSSIBLE REASON AS TO WHY "BAHAMIANS" ARE SO ANGRY, BUT SOME MIGHT NOT LIKE IT.

I WILL SAY THAT MAYBE THE INCREASE IN OUR FOREIGN POPULATION COULD POTENTIALLY BE A REASON. HISTORICALLY BAHAMIANS WERE A PEACEFUL SET OF PEOPLE, EVEN BEFORE THE LUCAYANS WERE WIPED OUT- THEY TOO WERE PEACEFUL. THAT BEING SAID COUNTRIES LIKE HAITI AND JAMAICA WERE HISTORICALLY VIOLENT COUNTRIES, WITH THE PEOPLE PRONE TO ACTS OF REVOLT.

AS WE CAN SEE EVEN FROM RECENT EVENTS IN PLACES SUCH AS HAITI AND JAMAICA, THEY RESPOND TO THEIR ISSUES WITH VIOLENCE. AND IT STANDS TO REASON THAT THE MENTALITY THEY BRING HERE TO THE BAHAMAS IS SEEPING IN TO AFFECT BAHAMIANS.

FAST FORWARD NOW THE BAHAMAS IS ESSENTIALLY A MELTING POT WITH MANY BAHAMIANS HAVING HAITIAN OR JAMAICAN ANCESTRY, OR BEING EXPOSED TO PEOPLE OF THOSE ANCESTRY. SO MAYBE, VIOLENCE IS NOW BECOMING AN INNATE PART OF THE CULTURE.

A DISTINCT possibility, although I am sure a politically incorrect one!

@BahamaRed, we may not want to hear it or it may not be politically correct to say, but many of us believe that it is true.....every single word of what you have said!

This invasive phenomenon of violence has apparently penetrated the Country at school level..........

I WISH SOMEONE WOULD DO A CENSUS TO SEE THE ANCESTRY OF THOSE CONVICTED OF VIOLENT CRIMES, OR TO SEE WHAT NATIONALITY OF PEOPLE THEY WERE PREDOMINATELY EXPOSED TO.

I DO BELIEVE THERE IS A LINK TO OUR INCREASING IMMIGRATION PROBLEM AND THE LEVEL OF CRIME HERE IN THE BAHAMAS.

... that combined with a bunch of ignorant people having children with no conscience or broughtupsy and there you have it, a social mess!

Yes, GOD said in a moment of anger he created the DESTROYER, and he allowed them to forge their weapons and kill your sons but the day of redemption is coming: Future Blessings for Zion

who bears no children;

break forth into song and cry aloud,

you who have never travailed;

because more are the children of the desolate woman

than of her who has a husband,”

2“Enlarge the site of your tent,

stretch out the curtains of your dwellings,

do not hold back.

and drive your stakes deep.

3For you will spread out to the right and left;

your descendants will dispossess the nations and inhabit the desolate cities.

4Do not be afraid, for you will not be put to shame;

do not be humiliated, for you will not be disgraced.

For you will forget the shame of your youth,

and remember no more the reproach of your widowhood.

5For your husband is your Maker—

the LORD of Hosts is His name—

the Holy One of Israel is your Redeemer; He is called the God of all the earth.

6For the LORD has called you back,

the wife of one’s youth when she is rejected,”

7For a brief moment I forsook you,

but with great compassion I will bring you back.

8In a surge of anger

I hid My face from you for a moment, but with everlasting kindness I will have compassion on you,”

says the LORD your Redeemer.

9“For to Me this is like the days of Noah,a

when I swore that the waters of Noah

would never again cover the earth.

10Though the mountains may be removed

and the hills may be shaken,

My loving devotion will not depart from you, and My covenant of peace will not be broken,”

who has compassion on you.

surely I will set your stones in antimony

and lay your foundations with sapphires.b

12I will make your pinnacles of rubies,

your gates of sparkling jewels,

and all your walls of precious stones.

13Then all your sons will be taught by the LORD, and great will be their prosperity.

14In righteousness you will be established, far from oppression, for you will have no fear, and removed from terror, for it will not come near you.

15If anyone attacks you,

it is not from Me;

whoever assails you will fall before you.

16Behold, I have created the craftsman who fans the coals into flame and forges a weapon fit for its task;

and I have created the destroyer to wreak havoc.

17No weapon formed against you shall prosper, and you will refute every tongue that accuses you.

This is the heritage of the LORD’s servants,

and their vindication is from Me,”

Did you type all that or wasn't is copy/pasted from some where? Damn that's a lot of letters.

Taken from the Bible, Isaiah 54, The words of the Creator, God Almighty.. his message to descendants of slaves, but some of you do serve The Destroyer, the desolate one, the great deceiver and carry out his work. He is your father, the worker of iniquity. But judgment shall come to them as redemption shall also come to those who were promised and believe.

While we look at ancestry, let's also look at today's popular culture & entertainment, including the realistic video game phenomenon that promotes violent solutions to ANY & EVERY PROBLEM. Where is Marshal Dillon in today's rendition of the Wild West, where lives are valueless?.

Then who controls Hollywood and the entertainment industry? Who created the video games and sells them as ‘entertainment ‘ but has hidden intentions? Prey on the dull and the unsuspecting? But this too, shall pass. And judgment must come. And redemption will come to the children of God. Never mind those who can kill the flesh.

wnd After three years of Trump the opioid problem has gotten worse. Close to 80,000 deaths a year. Pray for America