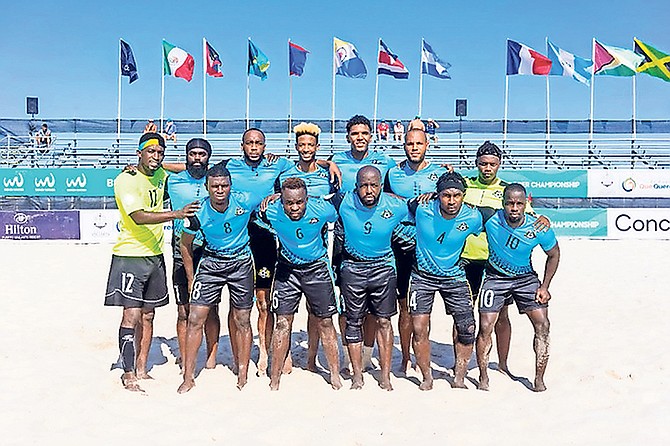 Team Bahamas got off to an impressive start with an opening day win at the 2019 CONCACAF Beach Soccer Championships.

The team scored a 7-4 win over Antigua and Barbuda in their tournament debut yesterday in Puerto Vallarta, Mexico.

Jean Francois and Kyle Williams each scored two goals to lead Team Bahamas to three points in the standings.

Gary Joseph got the Bahamas on the scoreboard quickly with the opening goal within the first minute, but Antigua and Barbuda scored on an equaliser from Elvis Thomas shortly thereafter.

Timothy Munnings put the Bahamas ahead with his goal and the team and Francois scored another to give the team a 3-1 lead at the break.

Lesly St Fleur scored from the kickoff to take a 4-1 lead and Williams’ bicycle kick made the score 5-1. Francois tacked on another goal before Antigua and Barbuda’s Kevin Richards would finally score to stop the run.

Williams added his second goal almost immediately thereafter to regain the five-goal lead for the Bahamas (7-2).

In other matches on day one, Trinidad and Tobago defeated Turks and Caicos 6-0 while Costa Rica defeated Jamaica 4-2, Panama defeated the US Virgin Islands 8-1 and the United States topped Bonaire 14-1.

Luis Escobar Passos Da Silva is the head coach, assisted by Wilson DaCosta, and Larry Minns as the team’s manager.