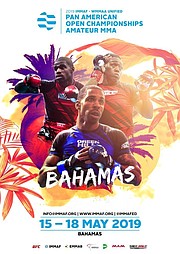 THE Bahamas is set to host a new event to the Bahamas and the region as local mixed martial arts continues to boost its international profile.

Amateur MMA competitors from all IMMAF-WMMAA affiliated nations are expected to participate across 14 weight categories, from Atomweight to Lightweight for women, and Strawweight to Super Heavyweight for men.

Over 100 athletes from throughout the region are expected to compete, from Trinidad and Tobago, Brazil, Canada, the USA, Mexico, Colombia, Jamaica, El Salvador, Paraguay and Panama.

“This event is actually the first of its kind in the region, a multi-national MMA cages tournament. They have been holding events like this in Europe, Asia, Africa and the World Champs so I proposed for the Bahamas to host the first ever Pan Am Championships and they agreed to give us at least two years,” he said. “We have just under 100 athletes in participation so it’s scaled down to their standards, but it’s still a big deal for the region and bringing this type of large event to the region and specifically to the Bahamas is very important to the sport and the development of local MMA.”

Team Bahamas is expected to field eight participants in the event, with a cross section of amatuer and novice fighters across several weight classes led by Dijonnaise Brown and Christian Miller.

Miller was the lone Bahamian competitor to represent the country at the 2018 Unified World Mixed Martial Arts Championships last November in Bahrain. He tied for bronze in the men’s Junior Light heavyweight (93kg/205 lbs) division.

“We have a few athletes that will be competing and they will get a lot of exposure on the international stage to competition and to a professionally ran tournament. We have a team of eight made up of several veterans and relative newcomers. Dijonnaise Brown is probably the most experienced. Cameron Lewis also has amateur experience along with Mcneil Newton.

“Christian Miller had the experience of competing at the last World Championships where he won the bronze medal so he has some experience as well. We flew in coaching help to assist with technical work, defending takedowns, defending submissions and some wrestling techniques as well,” Bazard said.

“The selection process was the first of its kind. It was basically a combination of strength testing with plyometrics along with testing the three major energy systems - short, middle, long term. Also testing their ability to be able to work under high fatigue, which is very important in our sport. So at the end of their fitness test they had to either defend themselves from a submission or had to grapple and wrestle. To go through that is a really important characteristic of a fighter.”

Competition begins each day at 11am and entrance is free to the general public. Registration begins tomorrow with the first day of competition on Thursday. Championship bouts will be fought on Saturday.

The IMMAF and the WMMA unified the the sport and the organisations jointly recognised Empire Mixed Martial Arts as the only MMA federation in the Bahamas under its umbrella.

“The decision to recognise your national federation is based on recognition targets being met in accordance with membership criteria set at an international level by the Global Association of the International Sport Federations and standards of good governance,” said IMMAF President Kerrith Brown and WMAA President Vadim Finkelchtein in a joint statement.

Brown visited the capital in 2017 on a site visit to meet with stakeholders and assess the local state of the sport.

“Our role is to get new countries under our affiliation and our job is to be the main governing body globally. This is probably the fastest growing sport in the world at the moment,” he said.

“The federations that come under our umbrella are entitled to bid for events like the Continental Championships, World Championships or the other events. The main benefit is the growth and development of the sport through networking, assistance, education and training. The main benefit is that the Bahamas will be involved with a governing body that has a strong vision to become an Olympic sport and benefit your athletes in the future.”