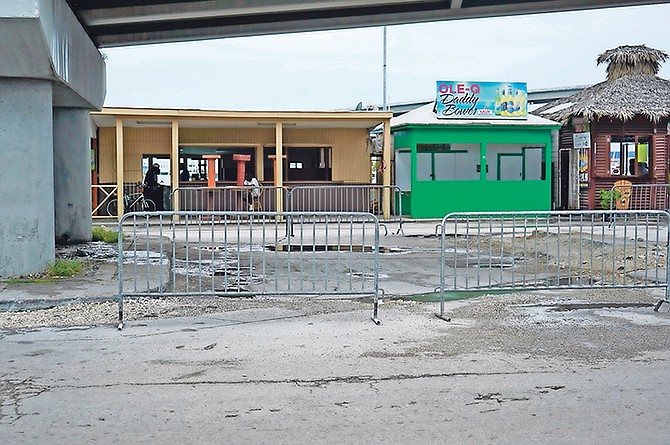 VENDORS at Potter’s Cay Dock are expressing concerns about the livelihood of their businesses, after barricades were placed under the Paradise Island bridge to prevent customers from parking in front of stalls.

The barricades come one week after two men were shot and killed in a double homicide at Potter’s Cay Dock on May 8.

Roosevelt Wright, owner of The Blue Hole, said the barricades were not allowing customers to come in and “get what they want.”

“Some people are not going to go in the parking lot and walk back because they prefer their car parking [in front] so it is affecting business,” he said.

He added that he wasn’t sure if the barricades were “going to work” because at the moment, the circumstances “were not looking too good.”

“What they’re basically saying is because of the recent crime and shootings we had they would like for everyone to park in the parking lot so they’ll be able to see as people come and they are walking in,” he explained.

“It’s a good idea, but I’m not really sure if it’s going to work because right now it’s really hurting business.”

Another vendor, who requested anonymity, expressed similar sentiments to Mr Wright and said he felt it would be more effective if officials increased police presence in the area instead.

“If they have more uniformed police walking out here we wouldn’t really much need the barricades because guys them will see the police in their uniforms and they won’t come here doing foolishness,” he said.

“I think it makes sense to do that instead of putting up the barricades because right now we ain’t making no money.”

He insisted that the barricades didn’t make “any sense” because there were no warning signs to let people know the area was now blocked off.

“They put the barricades here but they ain’t have no security out front and people have to park out there. Whose gonna watch the cars?” he questioned.

Still, there were some vendors who agreed that the barricades were needed, even though they would discourage some customers from coming.

Edward McPhee, owner of The Bang, said that stall owners were made aware of the barricades beforehand by officials.

“The police are just doing it for protection because with the cars parking, the generators making noise and the stalls playing music, it poses a problem.

“A lot of things happen on this dock and some of the vendors right on the dock don’t know until they maybe see some people running or hear from somebody else what happen.”

He added that Bahamians would eventually get used to the new parking arrangements because the same thing happened at Arawak Cay.

“Before Arawak Cay parking was made, people use to park cars right in front of the stalls. It took a while before people get use to parking outside,” he said.

Mr McPhee also told The Tribune that vendors were told that the barricades were only temporary and that the vendors would also receive some sort of incentive.

“They say in the next couple of days they intend to have some 600-800 visitors come [to] the Potter’s Cay area. So we’re expecting those people to bring some money to us,” he said.

“The police are our friends we need to work with them and partner together to make it best for the customer and ourselves.”

More police presence is needed all over the Bahamas. A little exercise will not hurt the RBPF officers, many of whom are quite overweight as it is. Bay Street is not the only area in need of police walking the beat (and off their cell phones).

What is the relationship between crime in this country and the US Stare Department? Go figure!

I am happy the police is controlling this area, & let them park in the parking lots to walk to the stalls too lazy.

I guess this provides some mental assurance to the public but the weird thing is the guys ran away on foot. They could have equally parked elsewhere and walked to the site.

yea because the lame ars police never enforced any traffic laws before and now you get this knee jerk reaction - how many millions have been poured into cleaning up potters cay and we got nothing - the only difference between now and the 70's is the pile of conch shells is gone.