'Less Than 20' Stateless People In The Bahamas - Symonette 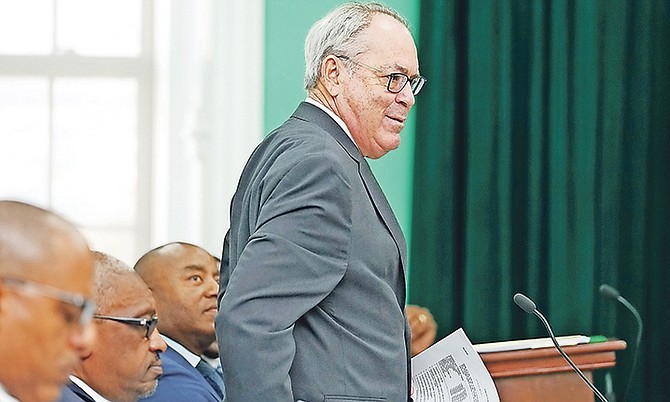 THE number of stateless people living in the country is likely less than 20, according to Immigration Minister Brent Symonette, who noted international agencies based in the country have not identified such an individual since he took up the post.

Mr Symonette underscored the narrative spun by local activists and picked up by international human rights organisations was overblown as he pointed to a much larger group of people who refused to access citizenship at birth.

Among those are students who make fervent appeals for expedited citizenship due to their participation in international sporting events, he said.

“I think stateless people in this country probably add up to my fingers and toes,” he said.

“I’ll say it again, if people think they’re stateless call me on my cellphone and tell me who they are. The office for the United Nations High Commissioner for Refugees has a local representative here, since I met with her I have gotten not one referral so that to me answers the question.”

“When I swear these guys in every Thursday,” he said, “they have to give up their passport. The majority of them have never had a passport because they don’t want to have a passport, because that will associate them with a country that they’ve never known.

The issue of statelessness was brought to the fore earlier this month during a hearing before the Inter-American Commission on Human Rights (IACHR) in Jamaica.

The IACHR commissioners raised concerns over the lack of data on the number of stateless people living in the country due to the lack of documentation and the country’s citizenship laws.

Retired Justice Rubie Nottage, former co-chair of the Constitutional Commission, also linked excessive processing delays at the Immigration Department to potential statelessness during a panel discussion at the University of The Bahamas.

She said the delays exacerbated inherent risks for statelessness due to gendered provisions of the constitution, which impacted how the children of Bahamians born abroad, out of wedlock, or to foreign nationals, could access citizenship.

The IACHR has accepted an invitation from the government for a site visit to investigate claims made by activists over the impact of government policy on migrants and their descendants, and conditions at the Carmichael Road Detention Centre.

Yesterday, Mr Symonette acknowledged the challenges posed by gaps between the constitution and the Bahamas Nationality Act but insisted the Department of Immigration was steadily making progress. He said he was not concerned by the upcoming visit, and made clear the country would not be dictated to.

“The narrative is out there, I think it’s unfair. The other day I swore in three people and all of them were under 25, and they could only qualify at 18 so by math that’s seven years (waiting).

“But a lot of it is (incomplete applications) that haven’t got documents. What’s annoying is way back then the delivery was by general post and a lot of people don’t check back and if they check back they get the runaround at immigration, whatever that story is.

“So now hopefully what we have up there is a dedicated person takes your details, and you get a file and so we then go in the system and find out where they are.”

“The system doesn’t work but we’re making progress,” Mr Symonette said, “and the new naturalisation bill (draft Nationality, Immigration, and Asylum Bill) is a step in that direction, and it’s the gaps that are the problem.”

He continued: “I get a person who wants to go to a running race, never had a passport, wants to be made a citizen right away, that ain’t my fault. They could have gotten a passport from birth and then got a visa for their Jamaican passport or Dominican passport…and that unfortunately does happen quite a bit.

“But we have a UNHCR rep here and we meet regularly, if there are any concerns she’s here.

“We also have which I think people have to accept,” he added, “we geographically are in a different position than most other countries. These people are coming this way (to The Bahamas to go onward to North America), they ain’t going that way (into the Caribbean).”

Tell them Brent ................... To be stateless means that you have NO generational access to a citizenship by reason of birthright (of BOTH of your parents) ............... That is a difficult thing to prove in The Bahamas, where most of these non-Bahamian residents are here because of economic reasons ............ Our Government cannot give out citizenship to children of illegal economic migrants like it is candy ........ The country will eventually get infected by social cavities

I would agree comrade Sheepee, one my favourite bloggers but only after he gets minister Brent reveal - how did he wiped from populaces Colony of Out Islands the other 25,444 Stateless live bodies?