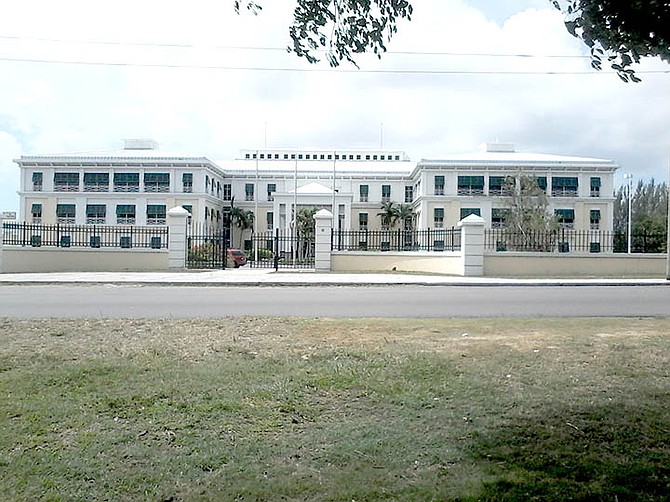 THE Ministry of Education.

STUDENTS who took the Bahamas General Certificate of Secondary Education (BGCSE) examinations failed to do any better this year in Maths, English and Science than test takers for the past five years.

Not only did fewer students sit the 2019 BGCSEs, but also fewer of them scored at least a C grade in these core subjects.

According to newly released results of this year’s national exams, a total of 484 candidates fell into this category. This represented a decrease of 1.22 percent when compared with 2018. That year, 490 students scored at least a C.

The scores have gotten progressively worse and were released much later than is customary. The results are usually made public in late August or early September. It is likely that Hurricane Dorian’s destruction in Abaco and Grand Bahama factored into the late release.

Additionally the number of candidates receiving a minimum or five subjects or more with a D grade or higher decreased.

This year 1,213 candidates attained a minimum of D in at least five subjects, representing a 9.34 percent decrease from the results of 2018.

It was a similar story when it came tor those who scored C or better in at least five subjects, with 760 candidates falling in this category compared with the 806 in 2018.

This means this category saw a 5.71 percent decrease, according to the results.

Still the Ministry of Education noted these results were better than anticipated.

“It is interesting to note that again this year more than 80 percent of the grades awarded continue to range from A to E, which is better than anticipated. The percentage is comparable to previous years,” the ministry said.

A total of 6,453 candidates from 109 centres were registered to sit the examination.

“The number of candidates represents a decrease of 3.89 when compared with 2018, which has a total of 6714 candidates from 111 centres,” the ministry also said.

Bahamas Junior Certificate scores were not better with an 18.36 percent decrease in the number of students who scored at least a C grade in maths, English language and science.

Those who achieved a D grade in five or more subjects were also lower.

A positive for the BJC results, the ministry said, was there were percentage increases at A and D along with decreases in F and G grades.

Negatively, there were percentage decreases at B and C along with increases in E and U.

In 2017, Education Minister Jeff Lloyd said something is wrong with the country’s educational system, but it seems officials are failing to spark notable improvements with the national tests.

During the Ministry of Education’s annual Teachers’ Enrichment Day in Grand Bahama that year, Mr Lloyd said officials could not continue to rest on their laurels while the national exam results remain at a D average.

He said: “For the last 10 years or more, the BGCSE results have shown not (any) improvement; we started out with a D, we are still at a D - something is wrong,”

He went on to stress the only way the issue could be corrected was to go back to the beginning and start with preschoolers.

This has been a focus of the ministry.

Last November, it launched the second phase of its universal pre-school programme with a contract signing for its private pre-school partnership.

A total of 44 private pre-schools have been identified for the plan allowing parents to get vouchers of up to $2,000 per child to enrol in one of the approved institutions.

Nearly a year later in August 2019, contracts were signed with over 80 private pre-school providers.

I'm wondering if it's the students, the curriculum or the teachers?

I grew up with O levels and we did well every year. You have to consider these Bahamian Government created BGCEs. Anything from the government has to be pure garbage. Might be time to go back to the British system...…

So true. I caught the last end of O'Levels in High School after my class took it. O'Levels were dropped. Fingers are being pointed in every direction except the government. I think the educational system in the country needs to be reevaluated.

Still the Ministry of Education noted these results were better than anticipated.

I can't believe Education Minister Jeff Lloyd actually said, “There is no way to camouflage it", implying the Minnis-led FNM government would have somehow manipulate the very dismal results if they could. But in fact the Ministry of Education did just that by combining the results of the public schools with the private schools. The public school results are much too frighteningly dismal to have been presented alone.

Truth be told, the unsustainable weight of the overwhelming numbers of illegal Haitian aliens in our country, including those who have fraudulently obtained 'official' papers of one kind or another from our corrupt immigration officials and other corrupt government officials, has all but wiped out our public education system and our public health system. Many of these Haitian nationals have infiltrated our defense force, our police force, our public school teachers, and now, to an inceasing extent, our parliamentarians.

The overall 'D minus' grade, that many of our students are now praised by education officials for achieving, stands for increasing Doom.

Many nations in our region of the world, and of course the many international organizations that monitor such education results and factor them into their various country rankings of one kind or another, are naturally left to wonder how our national anthem could possibly start with the words "Lift up your {dumb} head"!!

My, my how a minister became so ineffective!
Regardless whatever spin most high comrade Imperialists minister de-education attempts to insulate heself from the serial failures of government operated schools - it just ain't looking good minister remain substantively seated at cabinet table, yes, no .... The Constitution must makes some mention on how best such failure on job - makes they exit out of cabinet ....

Alfred Sears was just as bloody damn ineffective when he was Minister of Education and caused us 'true' Bahamian taxpayers to be saddled with over $150 million dollars of worthless student debt, most of which was paid to unaccredited or otherwise sub-standard colleges and universities in the U.S. that were only too willing to enroll our D minus high school graduates in a four year vacation abroad useless degree program.

A D-average and that is better than expected WOW. D-average = Dangerous, and it's seen all around, a country with a lot of Dumb Dangerous citizens doing dumb and dangerous things.

I wonder how the government schools fared against the private schools ? That might tell us something !

Why? Both have teachers and both have pupils. I would assume they both have similar or identical curriculum's too. It's not the type of building that impacts a pupils ability to learn or a teachers ability to teach. It's either the pupil themselves (probably a direct correlation to their home environment) or the standard of the teacher themselves.

Are you serious????? ........ Private schools have the best brains, best parents and best alumni with the best money .............. public schools are the poor plantations. Hope you send yours there (if there is no difference).

I agree with what you're saying, but why should private schools have the best brains etc. We are all born more or less equal. It's what goes on around us that shapes our ability to learn and to want to learn. Look at government schools in India for example, they are probably as poor, if not poorer, than the ones in The Bahamas, but they churn out smart well educated kids, who want to learn and do well.

First ....... understand HOW private schools operate in this country and then try and compare them with public schools. For the record, only a FEW private schools are producing excellent results as well ...... many are NOT. That is why the Government should publish ALL of the exam results for EVERY exam centre (public & private).

Thanks for answering my original question. I sincerely didn't know how the 2 compared. And yes, the government should publish results from both.
My next question would be to see when the decline in grade average started, and if anything can correlate to that. I'd be surprised if a D average has been the norm for the past 20-30 years, but who knows?

They cant use the government as an excuse when they try to find a job, we need to stop this nonsense. It that is the case let them put that on a resume, and see where it will get the. The government has its education already in every teacher who teaches. They must have at least a BA, the students are the losers. They skip school, do foolishness. make sure your children understand what getting a good education means. I made sure mines did.

Mostly well-trained teachers teach at school .......... but mostly dysfunctional parents do not know how to parent at home.

Herein lies the bulk of the problems in the education system (minus the physical state of many schools).

My child graduated this year and finished with 7A's and 4B's.I graduate with 5 O levels, 1A,1B,3 c's. I think the present exams are very much watered down. If our students were given an objective measurement it would be worst.

Reading this article I can spot at least 6 mistakes. Adults are writing these articles. It's obvious they don't proofread or they don't know any better. Then you wonder why the test results are so low. Maybe some of the teachers aren't doing enough and aren't making corrections as they should.