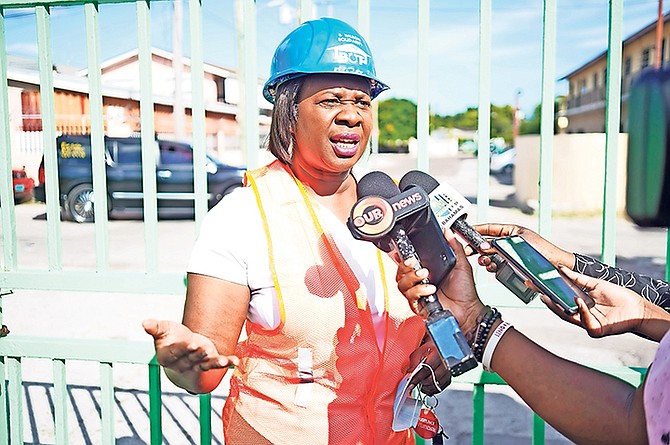 Speaking to reporters at CH Reeves Junior High on Friday, Mrs Wilson noted that the union’s decision to take matters to court is a response to the outstanding concerns highlighted by teachers at the respective schools.

“For eight weeks now, teachers (at Carlton Francis Primary) have been reporting to work and locked out of the gate with police presence, security officers and so they have not been allowed on their jobs and their salaries have been cut,” she said.

“And for C H Reeves, we’re dealing with health and safety of the teachers and the students and their salaries have been cut… (So) on Monday morning, we will go to the Supreme Court and we expect for the justice system to work for us.”

Her comments to the press on Friday came after a meeting with the Attorney General’s office and the Ministry of Education staff at CH Reeves was cancelled without warning.

“We had an agreement to come here this morning to have a meeting but the police have been called….I’m very disappointed and it’s amazing how education, when they are speaking alone, they give a lot of misinformation and a lot of untruths,” the union leader said.

Meanwhile, Mr Kahlil Parker, attorney for the union, added: “We came out here to resolve these issues, to put these teachers back to work and to get beyond this matter….and because they said because the press is here they do not want to engage in the walk-about that we had arranged.”

“We cannot resolve these issues if people are afraid of scrutiny and are afraid to have these disputes resolved in the public view. They drive our clients through the public. (So) we will go to court, and I expect the justice system to produce the results we need to resolve these ongoing issues.”

In speaking to reporters, Mrs Wilson said the meeting was initially meant to address the concerns regarding repairs needed at CH Reeves Junior High.

For weeks, teachers at the school have been protesting against the “unsanitary” conditions on campus, citing the presence of mold as one of the key concerns.

In her address, Mrs Wilson called education officials “disingenuous” for wanting teachers to work under conditions under which they themselves would not have worked.

“They are disingenuous. They are incompetent. They are inept and they expect teachers to work in conditions that they would not subject themselves to…. This is the problem we have in education,” she said.

But, speaking to reporters outside Cabinet last month, Mr Lloyd said his ministry is seeking to resolve whatever outstanding issues the teachers have.

Blah, blah, blah! So tired of the teacher's union and their leadership!

But not tired of the government failing to meet their duty? Hmmm

When will we stop pushing a mic in front of these union people. I am sick and tired of them bringing their spat with in public, when they should have the common sense to sit at a table with the parties and discuss. What is the leader of the "Teachers' Union teaching our children how to deal with issues?

Did you read the article???? ....... She said why she is forced to go to the courts and the media .......... The Government has muzzled the civil service and senior management ....... There are NO whistleblowers